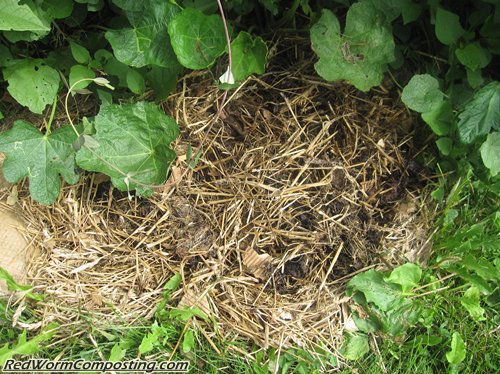 Back on July 5th, I wrote about some really “bad” bokashi waste I dumped out on my lawn (see “Bokashi Gone Bad!“), after it had been sitting in the buckets for more than 2 years. Aside from needing someplace to put it (certainly wasn’t going to dump it on my worm beds!), I was also quite curious to see how long it took before composting worms started colonizing it.

In all honesty, it took a fair bit longer than I expected! I figured that if it aged for a few days and sat through a good rain at some point, the worms would be all over it. As it turns out, they haven’t really started moving into it until fairly recently – and it’s by no means crawling with them just yet!

The material has certainly gone through some changes during this time. There has been a serious reduction in volume, and it looks and smells much more like organic waste being decomposed aerobically. Even though the worms haven’t seemed all that interested in it, countless other critters have colonized it during the last couple of weeks, undoubtedly contributing to the overall breakdown and stabilization of the heap.

I decided to dig around a bit more this morning, and did see quite a few worms. There seem to be a fair number moving in to the cardboard sheet I poured everything onto. 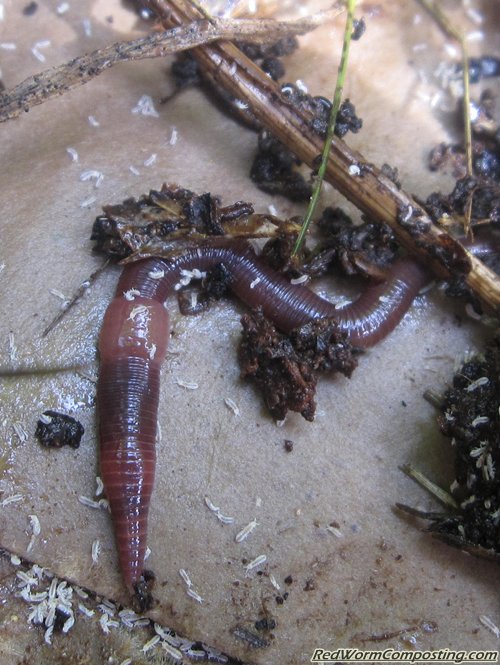 What’s interesting is that there were a LOT more sitting underneath the cardboard, in the mats of rotting grass that used to be part of my lawn (haha)! 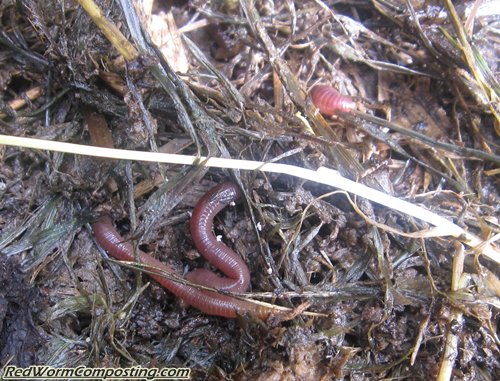 I have a feeling that if I had buried the material in one of my outdoor beds – once it had become a bit more aerobic, and had been rained on – the worms would have been all over it. I suspect that the small size of the pile and the fact that it is sitting out in the sun contributes to its lack of appeal (and helps to explain why there are a lot more worms underneath).

Anyway – it was a fun little experiment, and an important reminder of the fact that we should ALWAYS be aiming to keep our worms’ food and habitat as AEROBIC as we possibly can!
8)