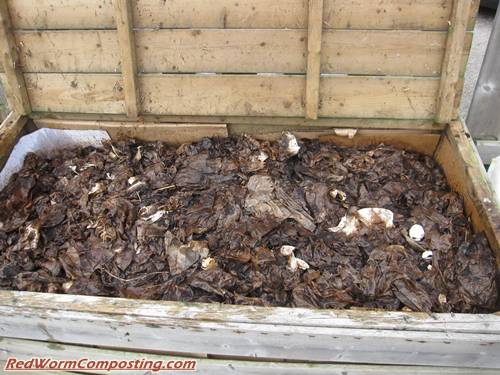 Things have continued to move along (slowly but surely) with my “Ultimate Backyard Worm Bin” project. Most of the overheating has subsided and I’ve been seeing more and more Red Worms moving in (and even laying cocoons) – especially around the sides.

I’ve been mixing in more shredded cardboard and watering the system fairly regularly. I’ve also recently started adding lots of coffee filters (as you can see in the image above). As an added bonus, taking the time to rake out the filters and other materials in the coffee grounds mix (such as egg shells and small amounts of fruit/veggie waste) leaves me with some nice looking grounds that I’ve started laying down as a mulch. Previously, the stuff coming from the coffee shop was only fit for hidden applications. lol

As you can see below, my first mulching project has involved creating a nice thick bed of grounds out in front of my backyard composters. I wish I had some “before” pictures for this location – it was a REAL eyesore (OK, so it’s still a work-in-progress! Haha)! Apart from just making this corner of the yard look nicer, I also want to see if the mulch bed will end up with lots of Red Worms in it. I suspect that I will need to pile it on pretty thick if I want to keep it from drying out all the way down, but we shall see! 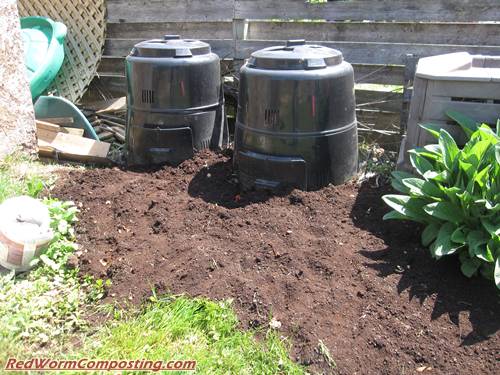 Getting back to the ultimate bin…

I recently received a huge load of beautiful well-aged horse manure (even had some Red Worms already in it) and I am toying with the idea of adding some to the bin. On one hand this sort of feels like “cheating” since I really wanted to see how the worm population would do in a cardboard-dominated bin, but at the same time, if this is really going to be an “ultimate” bin I need to do everything I can to create the best habitat for the worms.

I will definitely give it some more thought, and let you know what I’ve decided to do in my next update!
8)