I was recently digging through past posts on the RWC Facebook page (trying to find something I had remembered posting, and wanted to review) when I stumbled across another really interesting posting from a few years ago. It was a link for an article on “The Guardian” website entitled: California winery hires earthworms to clean up its wastewater, and I’m sure it must be the most “liked” and “shared” posting on the RWC FB page.

I can definitely see why!

The article describes the advanced bio-filtration process adopted by Fetzer Winery in California to handle their wastewater – one that relies on the use of a gigantic vermicomposting bed. According to the author, 14 gallons of water are used to produce a single glass of wine (most of it used for cleaning purposes)! The usual way of dealing with all this nutrient-rich effluent is to pass it through a series of aeration ponds, where bacteria can help to clean it up (breaking down contaminants etc) over the course of several weeks. With the vermi-filtration bed, the water can be filtered in a matter of hours!

The technology was developed by a company called BioFiltro, founded in Chile (now with headquarters in California and offices in New Zealand and Peru).

Here is an interesting blurb from The Guardian article:

The BioFiltro process was initially developed by Jose Toha Castella, a biophysics professor at the University of Chile, and commercialized by one of his students, Alex Villagra, a co-founder of the company. It has since been used at 129 installations in six countries, in environments from Antarctica to the Atacama Desert, and in a variety of wastewater settings from human and dairy cattle sewage to slaughterhouses and wineries in California, Washington and elsewhere, says Mai Ann Healy, the firm’s regional manager in the US.

According to the BioFiltro website – they now (as I type this) have 153 installations worldwide.

The process greatly reduces BOD5 (“5 day biological oxygen demand” – basically a measure of the amount of biodegradable organic matter in water) and levels of E. coli. They show what the liquid looks like before and after the process, and the difference in the appearance is amazing!

What’s interesting is they mention separating out solids before spraying the manure-infused water on the bed. They don’t say what is done with these solids (unless I missed it) – but this is yet another waste that could be processed by composting worms. In fact, it is separated dairy solids that are used some of the largest, most successful castings production operations in existence (eg Worm Power)!

In the video there is also mention of another BioFiltro system being used to filter the wastewater from a local town’s oxidation ponds. What makes it all even more amazing is the fact that – according to the engineer being interviewed – the technology is much less expensive than the alternatives (at least in the case of treating municipal wastewater).

The potential of this technology to revolutionize wastewater-handling in the agricultural sector alone is absolutely mind-boggling. Consider all the gigantic dairy cattle and swine operations currently using liquid-manure lagoons – some of them major environmental/health disasters just waiting to happen – and the negative impact they are already having on the environment.

I had the opportunity to work with liquid swine manure during my (ill-fated) grad school days, and was blown away by the amount of effluent produced even by a very small operation. I was mixing dilute liquid manure with straw, hot composting the mix and then feeding it to composting worms. It certainly worked, but the vermi-filtration approach is FAR superior in my mind. There are fewer steps (and less labor) involved, you can process the effluent much more quickly, while also conserving a lot more of the water! 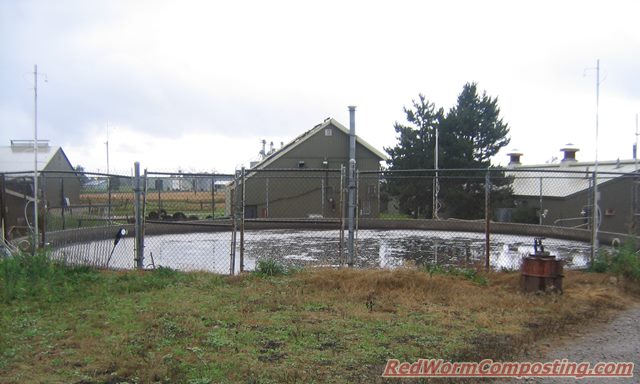 Revisiting this (bio-filtration with worms) topic also reminded me about yet another benefit offered by vermicomposting trenches, that wasn’t mentioned in my “5 Great Reasons to Use Vermicomposting Trenches & Pits” post. These systems can also serve as highly-valuable water (and nutrient) banks. In urban/suburban environments it’s disheartening to see how much rainwater ends up as run-off – often overwhelming local sewer systems during really heavy downpours, and not ending up put to good use.

An established trench is fantastic for soaking up and holding this water like a sponge – providing a source of slow-release moisture and nutrients that nearby plants (and the local environment in general) can benefit from.

The topic of bio-filtration using worm composting systems is absolutely fascinating to me, and I see so much potential not only in terms of much more environmentally-friendly waste handling solutions, but also in terms of ways these types of beds could be integrated with plant-growing (etc) systems!

Needless to say, this probably isn’t the last time I will be writing about the topic here on the blog!
Stay tuned (and share your thoughts below)!
😎