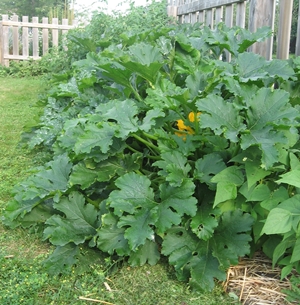 Unless you’ve been living under a rock, or are fairly new to the Red Worm Composting website, you’ll likely know that I’m more than a little passionate about the topic of vermicomposting trenches.

This is an approach that has truly had a massive impact on my vermicomposting journey, and even my life as a whole!

Earlier in the spring I had the honor of being able to share a (~ 50 minute) vermi-trench presentation at the Homegrown Food Summit, and was blown away by all the positive feedback. Clearly this is a topic of interest for a lot of people.

More recently, I (finally) released the early edition of my new course, Trench Vermicomposting – and I can’t tell you how excited I am about that as well.

So what exactly is the BIG deal about this type of vermicomposting system anyway?

Well, firstly – I want to make something very clear. I know the term “trench” can bring to mind some sort of massive hole in the ground, that requires days or weeks of blood, sweat and tears to create. I’m sure reading about some of the crazy trench-related projects I’ve launched – such as the massive hay bale garden trenches from a few years back and huge walking windrow bed, set up in a trench I’ve got going these days – doesn’t help one bit! 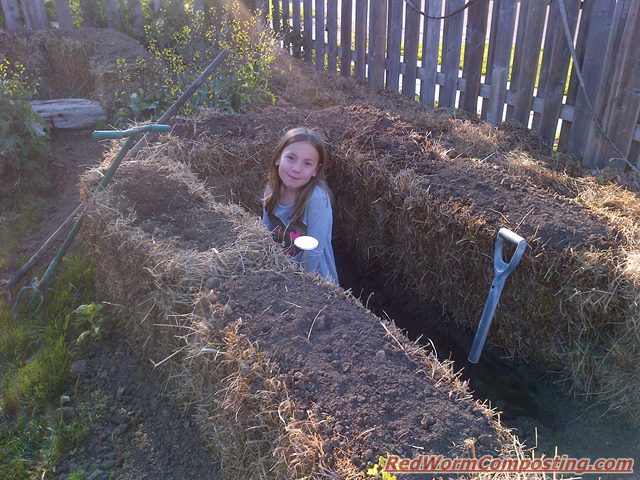 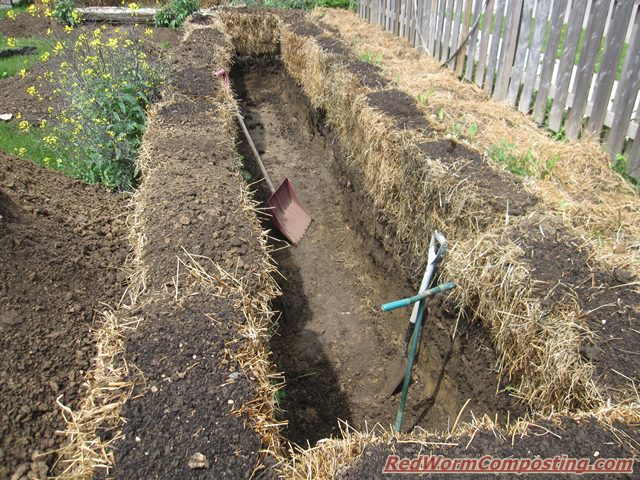 I totally get it. But what I want to emphasize is that this is an overall concept more than it is an exact, specific type of system. We’re talking here about the power of in-ground vermicomposting systems as a whole (no pun intended) – and there are even ways to mimic in-ground systems above-ground for that matter.

Bottom-line, I just don’t want people to assume they can only take advantage of this approach if they dig a massive trench – just not the case at all.

OK – so what is it that is so special about in-ground vermicomposting systems?

If I had to sum it up in one word, it would likely be “moderation” – which, according to Wikipedia is “the process of eliminating or lessening extremes“.

And that’s exactly what in-ground systems can help us do!

Outdoor vermicomposting has a lot of great advantages, and for some people it may be the only option – whether it’s a matter of not wanting worm bins indoors, a resistant spouse or family members. That’s just the way it is for some of us.

But the BIG problem is that in virtually every single outdoor location, at some point in the year (often multiple times a year) we are going to be dealing with extremes! The 3 major ones being HOT, DRY, and COLD extremes. 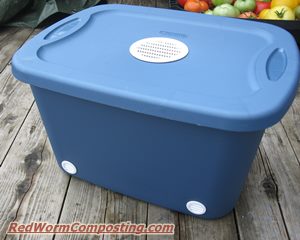 Typical above-ground systems, especially smaller bins offer relatively little protection from these extremes. Whatever the ambient conditions happen to be, that’s what the worms have to deal with – sometimes even worse (eg dark plastic bin absorbing sunlight, making it even hotter than ambient).

Once you get down below soil level things change a lot – it becomes much easier to keep temps cooler when it is hot outside, warmer when it is cold outside, and moist when it is really dry. And this helps to explain why regular soil worms live down in the dirt – some of them burrowing way down

Composting worms are much more tolerant than their soil-based cousins – but they are still earthworms, and they have particular requirements. Setting their systems – or at least part of their systems down in the ground can offer them a great deal more protection.

OK – so I think we’ve established that the one BIG overriding benefit of this type of system is moderation/protection. Let’s now look at 5 great things that can happen when you start using them. 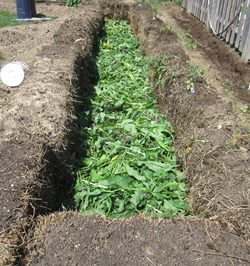 1) You Can Process LOTS of Waste Materials – In my Homegrown Food Summit presentation I likened a vermicomposting trench to the plant from “Little Shop of Horrors” (“Feed Me Seymour!!” – haha). These systems – larger trenches in particular – can almost be demanding in terms of the amount of material you need to add just to fill them and keep them filled. Another great things about the larger systems in particular is that you can toss in a huge array of wastes – many of them normally having no place in a vermicomposting system. I love tossing pretty well anything biodegradable down in the bottom of my trenches and bigger pits. Brush and tough fibrous plant wastes, chunks of wood, sod – you name it. This is why I love timing bigger projects to coincide with needed yard clean-up work.

A little more finesse is needed with smaller in-ground systems – but they are still great for processing plenty of waste materials (including various yard wastes). 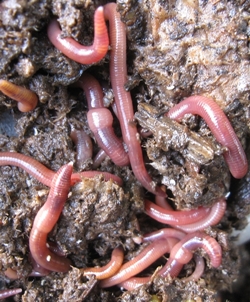 2) You Can Grow Lots of Worms – I’m a serious vermiculture guy. I love growing big populations of composting worms. As a biology/nature nerd, I’m sure part of it is just an overall fascination with raising living things. But a major motivator is income generation. Selling composting worms is a hugely-important part of “funding” my educational efforts, and in-ground systems have played a critical role in raising these worms over the years (this year (2019) especially).

As touched on earlier, these types of systems are great for helping to provide the worms with the conditions they need to thrive (or at least survive). Even if you aren’t entrepreneurial, all those worms can be used in other systems, shared with others (helping to “spread the worm”), used as a protein source for livestock like chickens etc.

And I’ve gotta say, it never ceases to amaze me, this idea of turning what so many people think of as trash, or an inconvenience/hassle into worm biomass (and other amazing things we’ll get to below)! 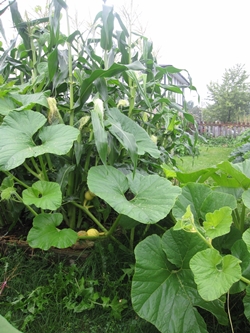 3) You Can Greatly Boost the Growth/Health of Edible/Useful Plant Biomass – What blew me away the most that very first season of using vermicomposting trenches (when I was involved with the restaurant food waste vermicomposting project) was impact they had on my vegetable gardens! It was unlike anything I had ever seen before. The worms, microbes and other composting organisms are busily converting all those wastes into rich humus, plant-available nutrients – even various plant-growth-promoting compounds – down below ground level.

Naturally, if you happen to have some plants growing nearby they can extend their roots over and take advantage of all this goodness. Many wastes can also be a slow-release moisture source, helping plants to avoid water-stress during drier periods.

And unlike with typical vermicomposting systems, these integrated systems don’t require you to actually harvest the compost (make the compost tea etc)!

But that’s not to say that you won’t still… 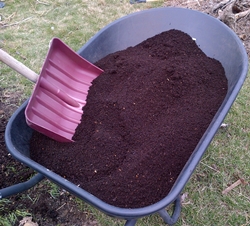 4) Produce & Harvest LOADS of Rich Compost – Early on I didn’t think of my trenches as compost production systems – and in fact, I even felt a little annoyed when people would ask how the compost got harvested (it seemed like they were missing the point).

That all changed once I started actually excavating my older trenches. It began as a way to start my trenches over again, but I quickly realized that the material I was digging out was amazing stuff. No, it’s not the same thing as “worm castings” produced in a conventional worm composting system – especially not if plants have been allowed to grow nearby – but it is still a fantastic, rich compost!

It’s important to note that the “harvesting” part is totally optional. If you simply leave a trench as-is (hopefully moving elsewhere to start new ones) you end up with a rich strip of compost – something I like to refer to as a “fertility” strip.

Speaking of “fertility”, one of the great benefits of setting up these systems is… 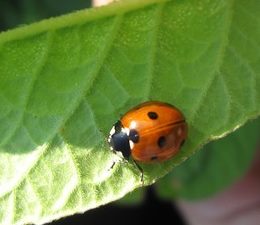 5) You Should See a BIG Boost in Overall Fertility & Abundance – When you are converting loads of waste materials into all this rich compost etc – especially if you happen to have a stream of wastes coming in from elsewhere – it’s inevitable that there will be a spill-over effect in the local ecosystem in general.

You will just start to see more life. All sorts of organisms are benefiting from the nutrition and then this just gets passed through the food-chain. So it’s not just about the plants growing right in next the the beds or the worms growing in them. You will likely see an impact in your entire yard.

Another “bonus” reason to get started with these in-ground systems is that they can be quite well hidden, or at least be made more aesthetically pleasing than some of the the more typical above-ground composting systems. Basic trenches and pits covered with straw/mulch usually just look like a normal part of your garden – and you can even add attractive structures over top like wooden boardwalks, benches or something like a vermicomposting planter (mine actually doubles as a garden bench). No need for big ugly tumblers or messy heaps of organic matter sitting in your yard! 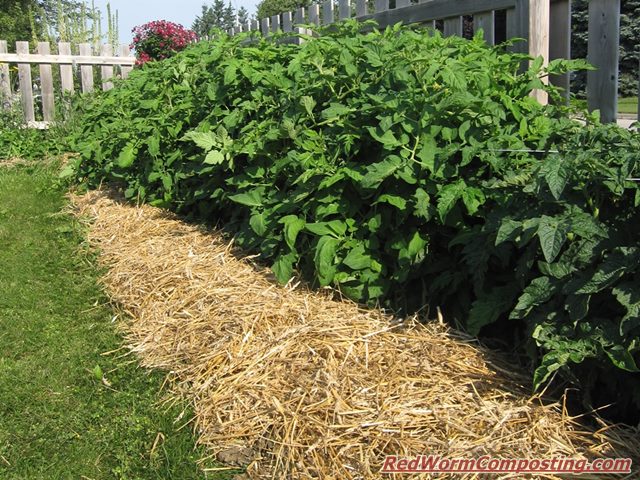 So there you have it! Hopefully I’ve given you some food for thought – and perhaps even supplied the extra nudge needed to inspire some of you to set up your first in-ground system. Remember – it doesn’t need to be huge. In fact, I always recommend testing the waters with something small – a basic pit or small trench, even something like a “Worm Tower” with a 5 gal pail.

If you would like to learn a LOT more a vermicomposting trenches and related systems, be sure to check out my new Trench Vermicomposting course.
😎