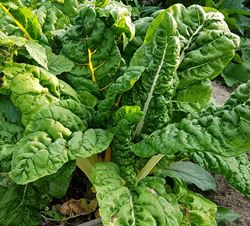 A common misconception people have (touched on in my recent “5 Great Reasons to Use Vermicomposting Trenches & Pits” post) is that these in-ground systems need to be massive, involving days of back-breaking labor.

I really want to hammer home that this is NOT necessarily the case at all! I’ve had a lot of fun with my own epic in-ground system adventures over the years, but it’s important for people to realize there are plenty of much easier options available! These are especially well-suited for those just starting out who want to test out these sorts of approaches without killing themselves (or taking up a lot of time) in the process.

Just for fun – and to illustrate my point – I decided to create a very simple pit garden a few days ago. It was based on one of the ideas I shared in the Trench Vermicomposting course, but not quite as involved (we’ll come back to what I mean by this a bit further along). 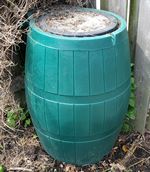 I’ve had an old leaky rain barrel sitting in the corner of my yard for a few years now. Although it doesn’t catch all that much rain (since no downspout running into it), I like to think of it as a sort of slow-release water source for nearby plants.

Since it is already taking up the space, I figured why not put a small-ish pit directly underneath it, and then put some crop plants nearby?

The digging process for this one was incredibly simple – likely on par with digging the hole for a 5 gal bucket “worm tower” system. In hindsight, actually using a bucket in this case might not have been a bad idea since it would have given the barrel something more solid to rest on.

I did most of the loosening with my garden fork – but removed most of the soil using a small trowel (and even my gloved hand). The pic below is a bit deceiving – making the hole look shallower than it was – but the pit was definitely under 2 feet deep, and might have taken about 15 minutes to dig (at most). 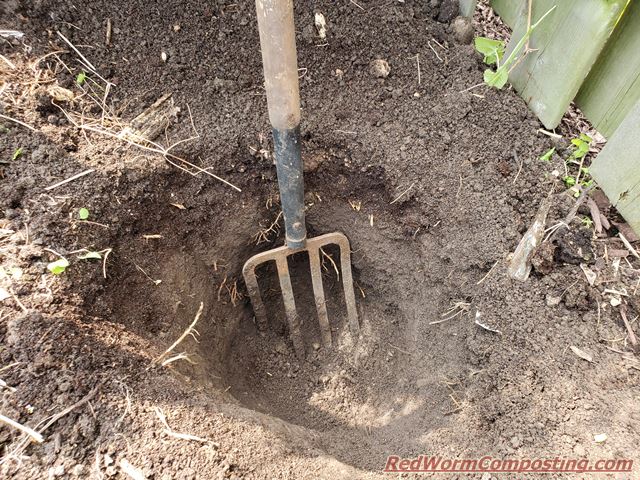 As is usually the case, the first thing I added was a “false bottom”. This consisted of multiple layers of wet corrugated cardboard. This will be a nice damp, cool zone the worms can retreat to if need be. As the cardboard soaks up nutrient-rich liquids dripping down from above it will become a valuable food source as well. 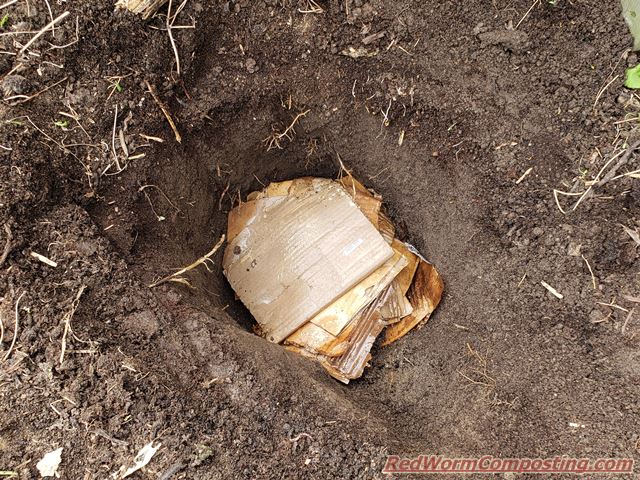 Next I transfered some worm-rich material from my railway tie trench bed (which I guess is more of a pit than a trench, but no need to split hairs – lol). The main habitat material is aged horse manure, but there is also old grass clippings and weeds as well. It’s no secret this is my preferred way to stock new systems since the worms come with a lot of safe material they are already used to. 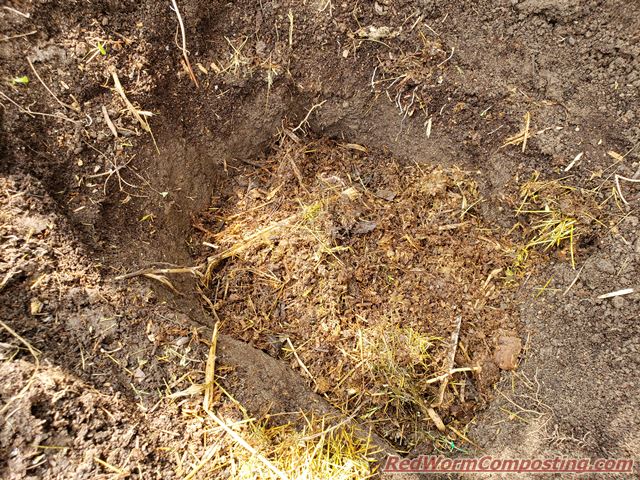 Over top of the worm zone I added some cover materials taken from the same bed (as the worms) – this was mostly straw, along with the older grass clippings and weeds. I also added a bit more cardboard over top. The idea here was to provide a bit of separation between the worm zone and the waste deposit zone – leaving it up to the worms to move into the food as they see fit! 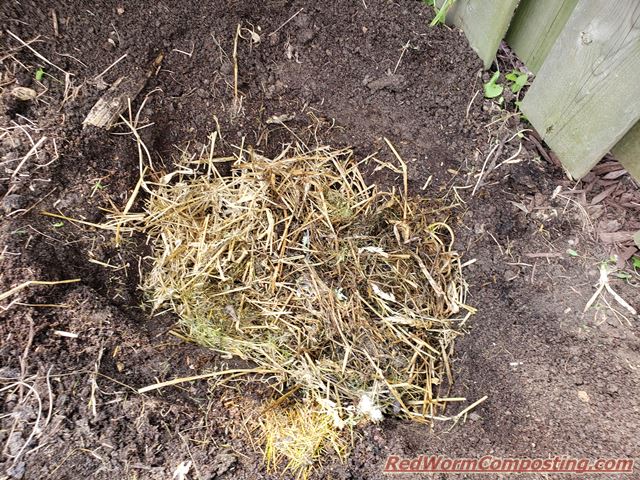 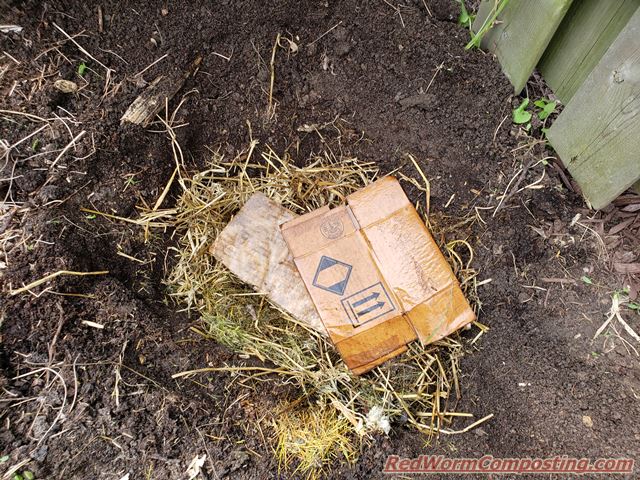 I then added quite a big bag of food waste I had been collecting under my sink. This is far more than I would likely add to a typical plastic tub worm bin at once, but definitely not a big deal in this case (especially with the separation zone I added). If things heat up etc, the worms can easily just move further down.

NOTE: If you happen to live in an area where animal acitivity is a concern, I would definitely recommend taking more time to properly prep the food. I would likely mix it with a living material, such as aged horse manure, old leaf litter etc – since this will help to mask odors. I would also likely bury the foods further down than I did in this case. That being said – there is likely less of a concern when you have some sort of structure over top, and especially if you actually used a bucket insert or something similar. 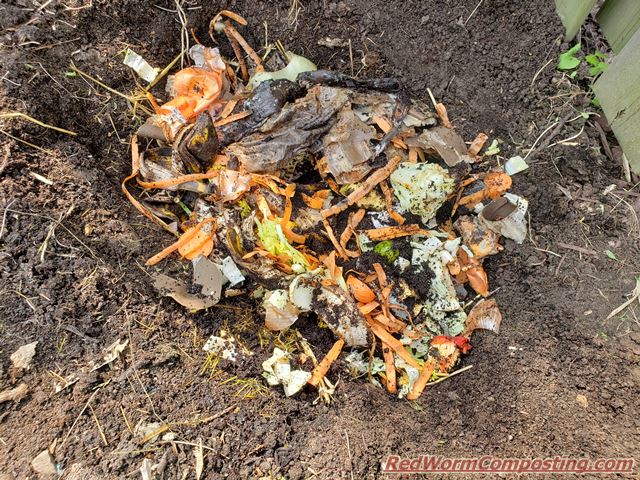 I then simply added more of the cover bedding, before putting the barrel back in place over top. 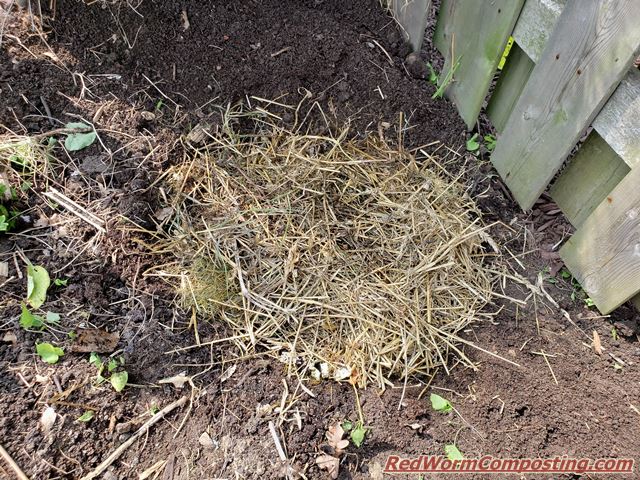 Coming back to something touched on earlier…
The system idea discussed in the course actually recommended the use of a basic wooden slate composter or some metal bars with something like snow fencing attached. This would offer the double benefit of providing more composting volume, as well as a support structure for sprawling plants like cucumbers and tomatoes. In more of an open location, you could likely put a plant on each of the 4 sides.

In this case, I just went with a couple of plants out in front – an english cucumber and a cantaloupe – and they will simply be allowed to run around in the garden. 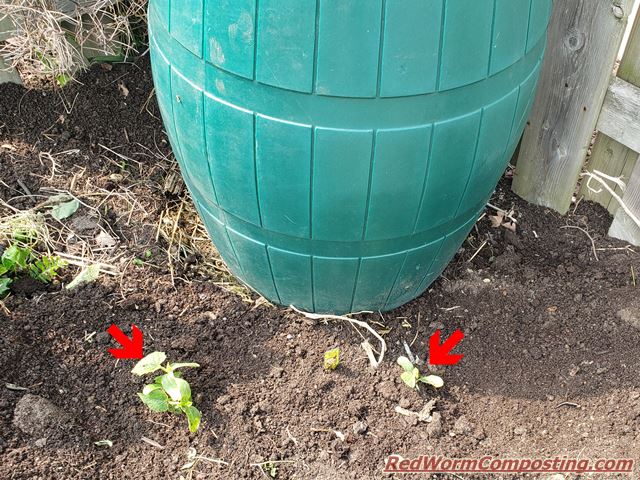 I’m excited to see how this turns out!

All said and done, the set-up time was about 30 minutes (max) from start to finish, with about as much “labor” as would be required to plant a small tree or medium sized shrub.