Earwigs in My Worm Bin?

Here is a question from Gail:

I have things like earwigs in my worm bin.
Will they eat my worms?

Hi Gail,
I am glad you brought this up since I’m sure there are a LOT of people wondering the same thing! I’ll start by saying that, yes, actual earwigs can reside in a worm bin – but this generally only happens with outdoor systems. The fact that you’ve said “things like earwigs” makes me think that you are keeping an open mind about it, which is great because there ARE other critters that can look quite a bit like earwigs – namely, the “Rove Beetles”.

Rove Beetles are almost certainly the most common group of beetles to be found in composting systems (including worm bins). They come in a variety of sizes and colors, but all tend to be elongated with a tail that often bends upwards – and they always seem to move quite quickly (occasionally even flying). The most common ones in my systems seem to be small and shiny black, but there are definitely some brownish ones (such as the big one in the second picture down) as well. I have not yet found any that are difficult to distinguish from earwigs (see the fuzzy third image), BUT there definitely seem to be some varieties that look quite a bit like them (follow these links to see images):
http://bugguide.net/node/view/54020
http://www.photographersdirect.com/buyers/stockphoto.asp?imageid=1725193

These two Rove Beetles were quite a bit larger than the ones I typically find, and thankfully they held still long enough for me to snap some pictures! 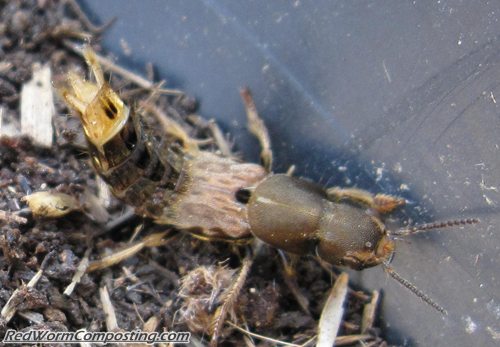 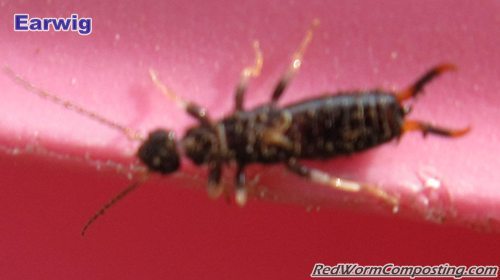 Rove beetles are definitely predators, but I would tend to view them more as a “friend” than a “foe” since they likely consume lots of excess mites, springtails, and small fly larvae, rather than doing any serious damage to your worm population.

Rove Beetle larvae can also be voracious predators in a composting system. You can find an image (second one down) of one in this post: Parasitic Worm Bin Mites?