Salamanders in a Worm Bin

Howdy.
A salamander has showed up in my 3-stack worm bin. I moved him out, he came
back. Is he going to eat my worms, or the other little critters living in
there? I can handle him eating a worm a week, but no one can tell me how big
a threat he is. We are in a drought here in California, so I hate to turn him
out if he’s not too voracious.
Thanks. 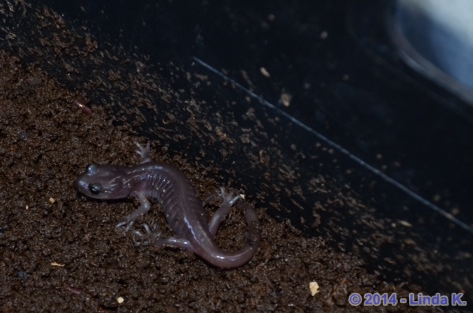 This reminds me of my “Toad Fruit Fly Trap” post – and the fact that I commonly find toads in a manure heap (containing Red Worms) I frequently visit. I’ve actually brought some home by accident from time to time!

Clearly, some amphibians have no problem living in a “composting” habitat!

In all honesty, the salamander will eat some of your worms – that’s definitely a favorite salamander food. But the likelihood of it putting a really dent in your worm population is minimal in my opinion. I also suspect there will be an added benefit of the salamander preying on various other critters (eg springtails, mites etc) at the same time.

As I mentioned to you in our email exchange, the timing of your question was perfect since I’ve recently been discussing with my daughter the possibility of getting her set up with some salamanders as pets (an upgrade on the “worms” I originally suggested, but a downgrade from her “parrot” idea! lol). Now I’m starting to wonder if it might not be a bad idea to see how they do in one or more of my worm composting systems!

My Worm Inn Mega seems like a prime candidate since it offers excellent air flow and a bit more light than a typical bin (not that salamanders need much). It also has a huge springtail population (along with a wide assortment of other critters).

Thanks for the inspiration – and do keep me posted on your progress with “Sully” (yep, Linda’s in trouble – she’s already named him! lol)!
😎

Keeping Worms Outside in Cold Weather