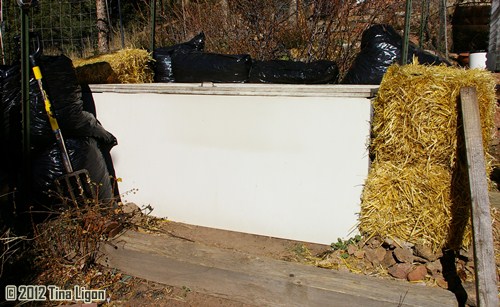 I have been a worm wrangler since 8/2009. I live at about 8000’ in the foothills of Colorado. I started with a larger bin than usual, a converted refrigerator that is stripped down to being an insulated box. I got my first worms by volunteering for a morning at a local worm farm in Fort Collins, CO, http://www.cowormman.org/. It is a great way to get started – I learned so much in those few hours. Here is an earlier post (on the RWC blog) with more details from the first year: “Tina’s Outdoor Worm Bin Experiment“.

Winter one – I got nervous with low temperatures and added a 2 gallon container of water with an aquarium heater in it to the center of the bin. All was good except it did dry out quickly in the surrounding area; I had the temp in the mid-60s.

Winter two – I moved all the worms into indoor plastic bins, about 6 of them, due to an out of state work opportunity. I learned that the outdoor bin is much easier than that many inside. Plus I gave away a few bins, amazing how many worms there were.

Winter three – I made one “insurance” bin for indoors, a plastic footlocker, so it is a bit larger than typical but it has some built in wheels and handle so it is easier to move around. It actually sat right behind my desk; you would never have known it was a worm bin. The biggest problem with it was that I tended to use it as a piling place for papers, so I had to clear it off in order to feed them. The outdoor bin did great and didn’t just survive – it was quite active. 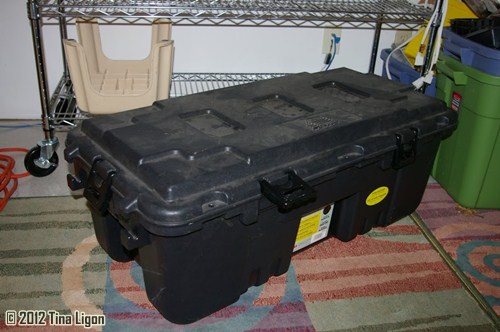 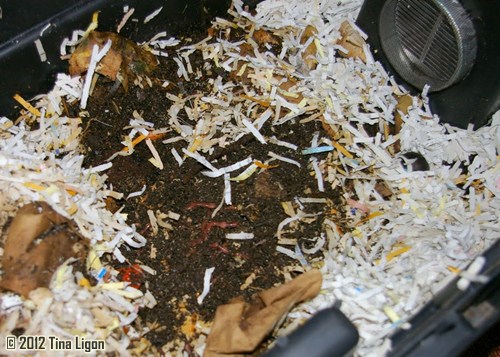 I used the spent grains from my husband’s home brew activities for its composting action along with leaves to be my supplemental heat source. The grains will make pretty hot compost and the worms love them. I like the beer, so it’s win-win. I always add this “controlled hot compost” in just one area of the bin so that there is plenty of space for the worms to move into if it gets too hot. I also had several trash bags of loosely packed leaves that I put on top of the worms as insulation, it works great and I can remove them easily when it is time to feed or I am opening the bin up on a nice day. I keep a compost thermometer in the bin so I can monitor the temperature. 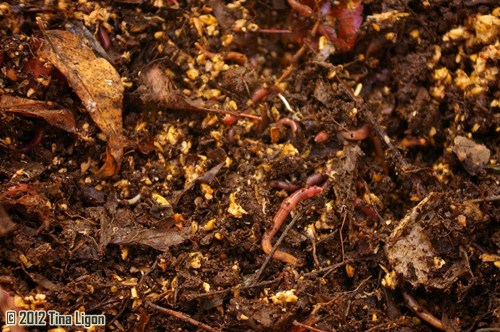 Winter season four (2012) – I have had some near misses with getting ready for winter this year. I just haven’t followed my own advice and have had some overheating problems. Thank goodness my worms seem to have a guardian angel that comes and knocks me over the head so that I go check on them. Of course the sight of 1000’s of worms trying to do a mass exodus is never pleasant. Now, after several weeks, things seem to be back under control. Now that I am back to a happy place, I will tell my story.

I was in the process of trying to build up some mass for the winter season. I had about 1 ½ gallons of spent grains that I had stored in the freezer. I got it out and then promptly forgot about it for several days. By the time I opened the container, it was getting a bit ripe. Yep, so what did I do, I dumped it onto one end of the bin and mixed it in a bit with some shredded paper and leaves. Yes, it started to heat up pretty quickly and smelled pretty darned foul, definitely some anaerobic activity happening.

Believe it or not that didn’t seem to deter the worms too much – yet. It was about 90 F at that point. So what did I do then, added some leaves to the other end of the bin. What do I always tell others? It is a good idea to only mess with one end of the bin at a time, allows for a nice escape route if things go south. Back to the stinky end – I turned it and added some shredded paper on the bottom because it was wetter than ideal. (Note to self, don’t be touching this stuff with bare hands, the smell lingers even after several washings.)

So a few days go by and I got that knock on the head, “go check on the worms”. Darn, it had heated up to 110F in the core on both ends and the worms were staging a mass exodus up the sides of the bin. I think there were enough greener leaves (read nitrogen not just carbon) in the mix that it started composting also. So here was my panicked, emergency action. First I pushed the material in the middle toward either end and made a clear spot that I filled with about 6 inches of shredded paper that I slightly moistened and added a bit of food scrapes, this was to be the safe haven to move into, similar to a new worm bin. I then went on to the leaf end and turned it to aerate and cool the material. When I say turn, I use a turning fork and really mix it up and try to cool it off. I did not replace the carpet or any insulation and left the top propped open during the day.

I repeated most of this process for several days and things started to cool off and worms were moving into the center “new” area. But no, I am not finished screwing up yet. We were to have some cold weather so I decide to put my insulation back into the bin, bad idea. Yes, I got the knock again in a few days and went back to see the worms with their suitcases packed and waiting for the next train out of there to better homes. It was too hot again. 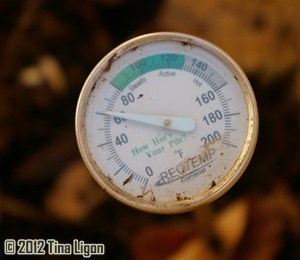 So I go through the process of turning and adding some paper and cooling. By this time, at least the stinky grain end smelled much better. After a few more days the temps were back to reasonable levels and we were about to have some cold weather, lows of about 12F and highs of 22F. So I did put the insulation back in and am happy to report when the 3 days of cold had passed the temperatures were about 60-70F. There were a few worms crawling up the side on one end and I realized there just wasn’t much left there for them to munch on so added some food. Now I have to start worrying about the temps dropping too much. But I promise, only one end at a time and I will check often when I add a quart only of spent grains.

It looks like I have managed to avert total disaster with my worms and they are settling back into a happier home. The indoor worms are doing just fine; they just get the normal food scraps and shredded paper.

Until next time – happy worms to all.

Tina Ligon is an avid gardener and composter living at 8000′ in the Colorado Rockies. She is a contributing blogger for a “mountain gardening” blogsite sponsored by the local Master Gardener group at: http://coloradomountaingardener.blogspot.com