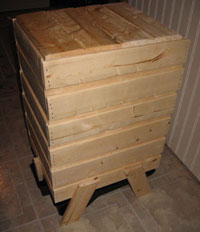 As mentioned, I bought the system from Wood Worm Farms. They offer a number of different sizes, and I decided to buy their largest system (5 trays) to help ensure that the castings in the first tray are finished by the time I fill the last tray.

I found the ordering process very easy and convenient. I buy a lot of products online (and work online), so I was more than happy to use the Paypal shopping cart system. I sent an email to them (Wood Worm Farms) just to make sure my order had been received and inquired about the estimated shipping time. I received a friendly e-mail back relatively quickly, and was happy to learn that I wouldn’t have to wait very long for my new system.

The package arrived sooner than I had expected (literally the day after I wrote the post on the blog), which was a nice perk. All in all I was happy with the way the worm bin looked once I had it unwrapped. It wasn’t quite as sharp looking as the units pictured on the website, and was a wee bit shaky (not sitting perfectly flat on the ground) – it also didn’t come with a handle on the lid as shown (on the site). That being said, it does seem to be structurally sound and of course looks much nicer than my usual worm bins – who knows, maybe my wife will even let me keep it out where people can actually see it!
😆

I was a little worried about the fact that the trays are made from untreated pine, and actually spent some time researching various earth-friendly ways to treat wood. Edward, from Wood Worm Farms, put my mind at ease (with a comment on the blog) by assuring me that he has yet to have a system become so rotten as to be structurally unstable (even systems kept outdoors). As such, I’ve opted to leave the bin untreated for now.

Bottom-line, I’m definitely happy with the purchase and very interested to see how the bin performs! I will talk about setting it up for worm composting in my next post since it relates to another fun project I’ve started up.