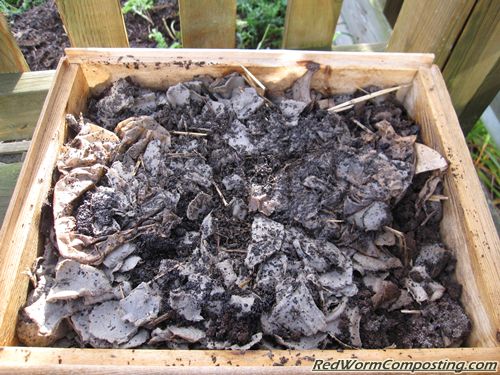 It’s been well over a month since my last stacking worm bin update (definitely doesn’t feel like it’s been that long!). My primary reason for not providing many updates is the fact that nothing has really been changing significantly in the system. I really wish I had decided to set this experiment up several months ago, since I’m pretty sure that one of the issues has been the cooler weather (especially at night).

Just to bring everyone up to speed here – the idea has been to see how composting worms do with a diet consisting primarily of coffee grounds (only other “food” material is the shredded cardboard bedding). Of course, I’ve also been interested in testing out the stacking system again (since it’s only been used once before) to see how it…uhhh…stacks up (yuk yuk) against some of my other systems.

The worms have done well down in the first tray. It looks as though they are processing grounds and shredded cardboard, and they just generally seem vigorous and healthy. There hasn’t been much in the way of upward migration, although, whenever I lift up the second tray there are usually some dangling down. Interestingly, I found a number of worms in the second tray this morning when I checked on the bin, but I’m pretty sure this has something to do with the fact that it poured rain for most of yesterday. 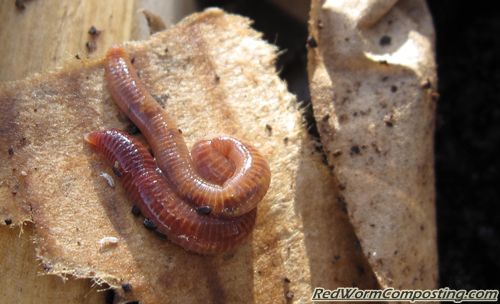 With temperatures only continuing to drop, it looks as though I’m not really going to have the chance to test out the bin itself – I really don’t have any interest in having it up and running indoors this year. I DO however want to keep going with this coffee grounds and shredded cardboard trial to see how things pan out over the long haul. My BOM-6000 bin is sitting empty in my basement at the moment, so I think that will be the perfect bin to move everything over to. What’s great about it (in comparison to the stacking bin) is that it can hold a LOT more material. One of issues I ran into with my stacking bin was a lack of space for adding new material (even with the second tray). I also think that the BOM will keep more moisture in, which should help to keep the grounds “worm friendly”.

Anyway – that’s basically in for now. I’ll likely write another update once I move everything over to the BOM bin.
8)