I was actually hoping to have a new generic image for you guys today (i.e one to replace the image above) – showing my bin with a second tray – but alas, it seems I have too much material in the first tray still so I’m unable to get the next tray positioned nicely over top. My plan was to fill the second tray entirely with dry bedding – as recommended by a RWC reader – so as to (hopefully) discourage the development of another bad fruit fly infestation – but obviously, without the second tray nested snugly in the first, that’s not going to do me much good!

As mentioned in my most recent Worm Inn Journal post, last week I thawed out some frozen carrot peelings and added it to both of these systems – the WF-360 receiving just shy of 1 lb of the material. 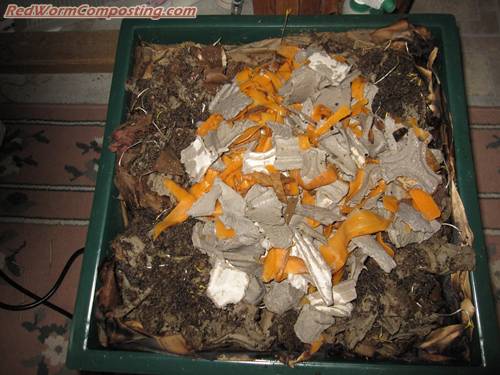 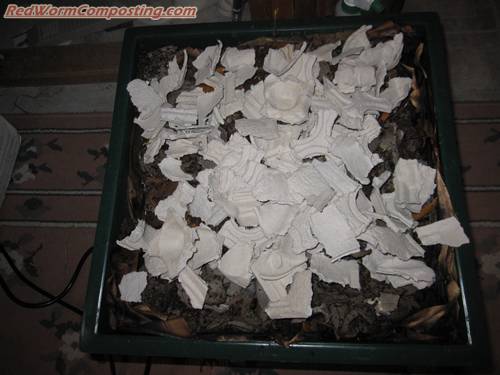 Although the number of fruit flies in my house has dropped substantially, I’ve been pretty paranoid that I’m going to end up with another bad infestation in the WF system now that I’ve added more food. I checked on things this afternoon, and it looked as though maybe one or two fruit flies (or gnats) flew out, but they certainly don’t seem to have established a strong foothold…yet!

I think it’s safe to say that waste preparation (or lack thereof) can have a HUGE impact on the success of an fruit fly invasion. Any bulkier materials, especially those that won’t be processed by the worms for a while (if at all), seem to be prime time fruit fly breeding grounds. When I checked on the WF bin last week I noticed part of an apple core that still had not broken down all that much (even after a good month or more of sitting in there), so I can only imagine the sort of fruit fly nursery it had been. Other common culprits can be resistant fruit peels and rinds, since the fruit flies absolutely go bananas for them (no pun intended – well ok, maybe a little bit! lol), yet the worms won’t really feed on them all that readily!

Moral of the story – do EVERYTHING you can to optimize materials for microbial break-down and worm feeding. Chopping, freezing, blending, grinding – you name it! If you’ve got a healthy population of worms and you’re presenting them with a material they can start processing right away, there’s a pretty good chance they are going to outcompete (maybe even consume, if they are small enough!) any fruit fly larvae that end up in the material.

I’d love to set up an experiment to test this out a bit but…yeah, I think I’ve had my fill of fruit flies for the next little while! lol
I still have some very small, enclosed (manageable) colonies going though, so perhaps this is something I can try in another month or two.
8)

IMPORTANT UPDATE: The deadline for this month’s Worm Factory 360 contest is rapidly approaching! I was shocked to learn from Kate that there had only been 70 some-odd entries thus far!!! We had more than 400 the first month! C’mon everyone – I know a lot of people are still in holiday mode here (lol), but we need a bare minimum of 100 entries to even have the draw!
Here is a link to the contest page:
http://www.naturesfootprint.com/redwormcomposting **CGU - Your "Ultimate" Worm Farming Education Resource >>Learn More<<**
Previous Post

The Euros vs Reds Head to Head Challenge