Quick Worm Inn update for everyone! In my last “Worm Inn Journal” post (see “Worm Inn Journal-12-15-11“) I shared the good news that the parasitic nematodes seemed to have really helped reduce the (massive) number of fungus gnats that were in the system a short time before. Well, as of yesterday, there didn’t really seem to be ANY!

As has been the case with my Worm Factory 360, I’ve basically just left the Worm Inn alone (other than adding some water occasionally). In fact, no food waste has been added since the middle of November, when I added about 7 lb worth. I did some digging around yesterday, and it looks like there are plenty of worms, and – surprise, surprise – a lot of the original bedding material has been converted into worm castings.

Given the apparent elimination of fungus gnats (fingers crossed), I decided it was definitely time to add some more food. Earlier in the week I removed some grated carrots from the freezer and left them to thaw out. I added some of the material to the Worm Factory (will write about that in my next WF 360 update) – but most of it was added to the Worm Inn. It was nice and slimy (thankfully didn’t smell too bad though), so it’s safe to say there was a decent microbe community associated with the material already.

The amount added was just over 1.5 kg (~3.3 lb), so rather than risk having it turn into a big ball of anaerobic goo in the middle of the Inn, I mixed it with quite a bit of dry shredded drink tray cardboard. 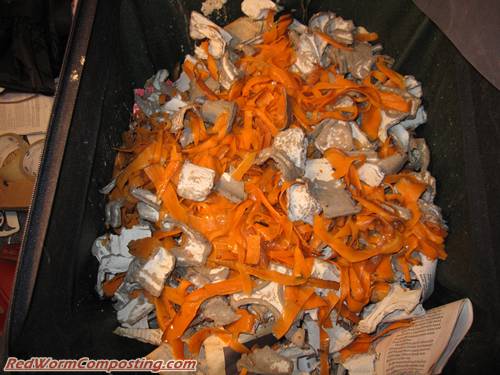 Over top I added a nice thick layer of dry cardboard and old newspaper strips (which had been used in other worm bins), before watering everything down a bit. 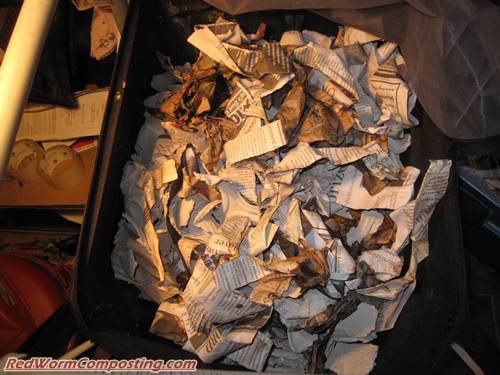 If I start to see ANY gnats in the system I will likely start adding the nematodes again – I definitely don’t want to let a full infestation develop before doing anything this time around.

Will keep everyone posted!
8)