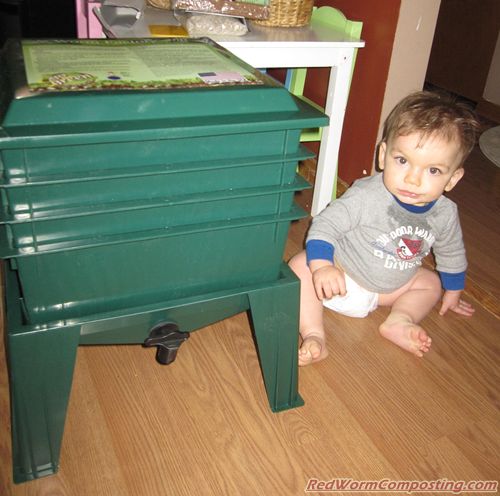 As I wrote recently in the newsletter, a short time ago I was contacted by Kate Alldredge from Nature’s Footprint – makers of the “Worm Factory” series of worm bins (among other products). Her initial contact was innocent enough – she simply wanted to know more about my use of the parasitic nematodes, Steinernema feltiae (how effective they were against gnats and fruit flies etc). Well, as you might imagine (based on the title of this post), one thing led to the next, and Kate ended up asking me if I’d like to test out one of their Worm Factory bins.

(NOTE: We can also thank Kate for getting me thinking about – and then ordering – parasitic nematodes again!)

In all honesty, I’ve had a pretty long-standing mini-grudge (haha) towards stacking worm bins. I own a wooden model, and found that it fell short of expectations, and I’ve received a LOT of emails from vermicomposters encountering issues with their own plastic stacking systems. As such, the opportunity to ACTUALLY test out one of these bins myself could serve as a very valuable experience. I’m hopeful it will help me change my tune about stacking bins, and I DO think it will definitely help in terms of providing people with educated feedback regarding how to effectively use these things.

As is usually the case with “free stuff” – I was pretty excited about the arrival of my WF-360. My (almost) one year old even decided to get in on the action (he was so excited, in fact, that he spilled his drink – yeah, yeah, that’s it! lol) 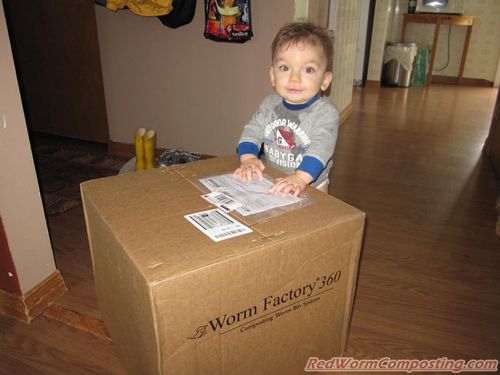 Right off the bat, I was pleasantly surprised by the amount of “stuff” that came with the bin. Here’s a list of the included items: 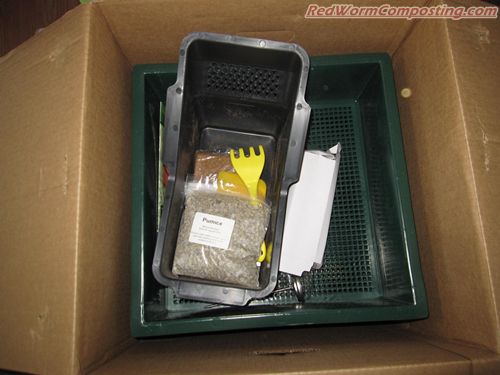 It really does seem as though Nature’s Footprint wants to see new users get up and running effectively. I also must admit to being somewhat surprised by the size of the bin (see how it “stacks up” against a one year old above! lol). Already I can see how this one might work a fair bit better than the bin I tried previously (which has very shallow trays). Just generally, I really like to “look and feel” of the bin – almost seems like something my wife might tolerate being in plain view (haha) – not that I plan on pushing my luck! It seems very sturdy as well.

Part of the reason I’ve wanted to test out the “360” model was due to the fact that I was told it had improved aeration over other Worm Factories and other plastic stacking bins in general. For some reason I thought there were actually air vents in the corners of the trays, which in fact there are not. I guess if there was ONE potential “disappointment”, it might be the lack of any OBVIOUS major improvements in ventilation (I would still love to see one of these manufacturers actually put air vents in the trays and lid. That being said, one thing I DID notice was that the walls of each tray seem to curve inwards slightly, thus leaving an air space – there also may be a space at the corners as well. Hard to say for sure before actually getting this thing up and running!

I am going to resist the temptation to drill holes in the bin (haha) for the sake of properly testing it out as it is sold. I definitely look forward to getting the ball rolling!!

One of the things that came up on the recent survey was an interest in seeing more how-to stuff using different systems. Obviously doing a bit of a follow-along with the WF-360 is a great start. To make it even MORE interesting, I plan to also get my Worm Inn set up as well. NO, this is not intended as some sort of “head to head challenge” (lol) – it will be an educational look and how to use both of these bins, and to demonstrate how the care/maintenance might differ somewhat. I KNOW already that the Worm Inn works – and works well – and I’m quite optimistic that the WF-360 won’t disappoint either.

Now, for some serious stuff…

I want my community to be 100% clear on the terms of this arrangement with Nature’s Footprint. For starters, be assured that I told Kate I would only be interested in testing out the bin (or at least writing about it) if I was able to express my honest opinions. Also be assured that I am receiving NO financial compensation for this testing – my compensation is as follows:
A) I get a free WF-360 bin (whoohoo!)
B) Nature’s Footprint has agreed to give away one free WF-360 per month IF I can get 100+ readers to complete their survey (thereby entering themselves in a draw) – NOTE: I forgot to mention the 100+ entry minimum in the recent newsletter (sorry!)
c) Nature’s Footprint has also agreed to provide a 10% purchase discount for any RWC reader who orders from the special RWC page on the NF site (I can’t remember if one needs to fill out the survey for the 10% discount).

All I need to do in return is write about my use of the system periodically – as I told Kate, this is pretty much a given anyway, since I like sharing my vermicomposting activities here on the blog

With that heavy stuff out of the way – let’s NOW have a look at what my children did with the WF-360 box (funny how little kids can get more fun out of the boxes the “fun stuff” comes it – probably a lesson in there somewhere for us adults!): 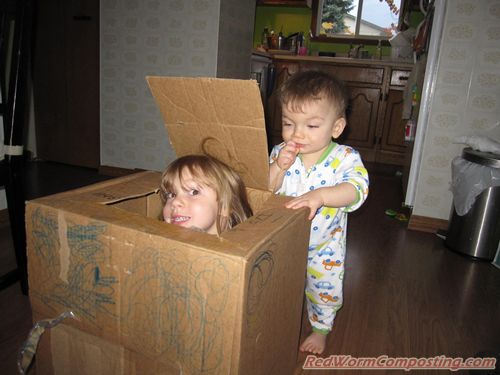 My Parasitic Nematodes Have Arrived!