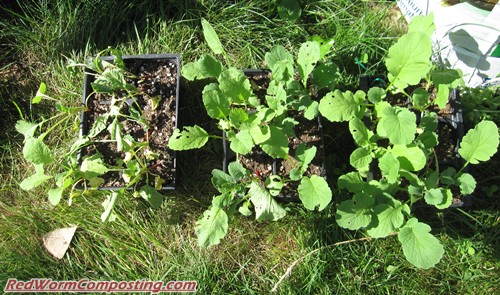 I was planning to throw in the towel with my radish growth experiment today – as someone aptly pointed out in a comment on a previous post, hot summer weather isn’t exactly the ideal time for these seedlings – but then I noticed something really interesting with my neglected plants. The Pro-Mix only treatment (far left in picture above) looked a lot worse than the two vermicompost treatments! To me, this seems to clearly indicate improved drought resistance (when vermicompost is added to mix) – just not sure if it’s due to improved water-holding capacity or more robust root structure (both?).

This is actually not the first time I’ve seen this in one of my experiments. Some of you LONG-TIME RWC readers may recall when I received some complimentary “Worm Power” worm castings a few years back, and ended up trying out various little growth experiments. As is the case with these thirsty radish plants, it ended up being a case of my absent-minded neglect uncovering something interesting (see “Worm Castings and Drought Resistance“). Clearly, more evidence supporting the fact that my foibles should be a cause for celebration, not frustration!
😆

Another interesting thing to note, is that the vermicompost with rock dust and grounds treatment seems to be quite the tasty treat for critters. The seedlings in this treatment have a lot more holes in the leaves than either of the other two. Could this suggest that rock dust might improve the flavor of leafy greens? I dunno – but that’s kinda cool if you ask me!

All in all, the 33% normal vermicompost mix looks the best – with bigger, healthy looking seedlings, in spite of the fact that I just haven’t been keeping up with my watering schedule! Speaking of which, and just in case you are wondering, I did indeed give these poor plants a nice drink of wah wah after taking the picture!
🙂

Moving on to the Crookneck Squash experiment…

This one yielded some interesting results early on, but things have started to level out a bit. It took a little while for any of the plants to germinate initially, but it was the two 33% vermicompost treatments (one with the rock dust etc, the other without) where the plants emerged first – the other treatments (Pro-Mix only, and pure vermicompost) were multiple days behind. 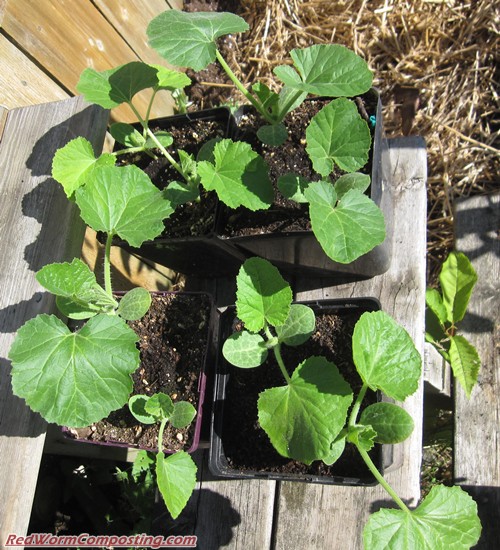 Next, I will likely remove the smaller of the two plants in each pot so as to provide the plants with a bit more room to grow. I will then likely move them to larger pots at some point.

Moving on to the marigold experiment…

While I am not really taking this one too seriously (especially given the fact that I didn’t use the same type of marigold in all the treatments! lol), it’s still fun to see how it’s coming along. Still basically looks the same as last time, but I have a sneaking suspicion that the rock dust and coffee grounds vermicompost treatment is on the comeback trail – and who knows, perhaps it will even beat out the other two eventually! 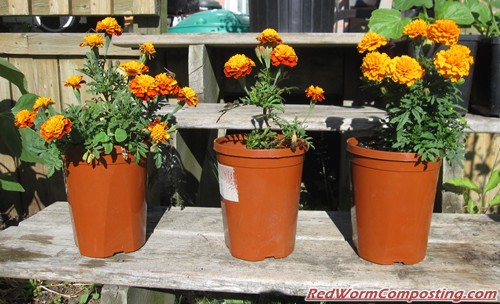 Anyway – that’s all for this update! Certainly more vermicompost growth updates (and new experiments?) on the way.
8)