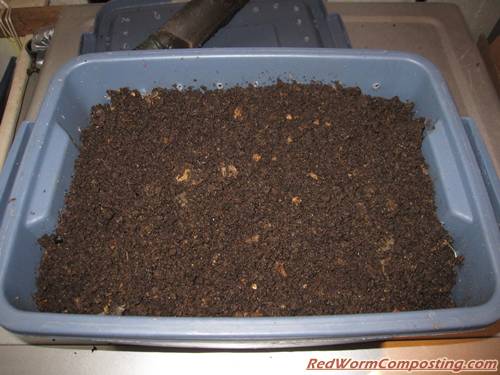 I decided to check up on the tub of vermicompost harvested from my Worm Factory 360 bin (see “Worm Factory 360 | 3-02-12“). It’s been sitting now for about two and a half weeks, so I was interested to see if any baby worms had hatched out from the cocoons, and just generally, what the material looked like.

The bin seems to work perfectly in terms of keeping the material quite moist, while still providing some air flow. The vermicompost looks and smells great, and I’ve actually decided to put some of it to good use (more on what I’m doing with the rest of it in a minute).

Some of you long-time RWC readers may recall my post about the “Valentine’s Day Philodendron” from April 2010. For those who don’t, here’s the scoop…a number of years ago, I bought a beautiful philodendron for my wife on Valentine’s Day. At the time it had red heart-shaped blooms, and – me being me – it just seemed a lot more appropriate than your run-of-the-mill cut flowers (never been a fan of these!).

Unfortunately, trying to keep plants in our home is challenging at the best of times. We don’t have a lot of good spots that receive enough outdoor light – and those spots that do are accessible to our plant-munching cat, Monty. Anyway – long-story-short, this philodendron has REALLY suffered over the years. As you can see in my video/post (linked above), I did make an effort to revive it at one point – but that experiment ended up falling off the rails (surprise, surprise! lol) before too long.

I am absolutely AMAZED that it’s managed to survive at all. It has spent the last 4 or 5 months sitting in our laundry sink in the basement where very little natural light reaches it. I’ll take it as a sign of the fact that “love conquers all”!!
😆 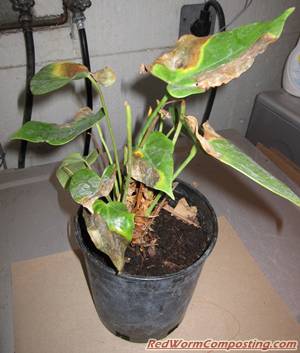 Anyway, the poor plant is in really rough shape, and I want to see if I can revive it with the help of some of this WF-360 vermicompost and by putting it in a slightly better location (I noticed that my basement shelving unit actually gets a fair bit more light than the laundry sink).

My very first experience with the “magic” of vermicompost as a plant growth promoter involved adding some (from an active worm bin) to the pot of another variety of philodendron – and watching as the plant basically exploded with growth. I’m hopeful I can AT LEAST get this particular one well on its way down the road to recovery!

The level of soil in the pot had gone down considerably over time, so I figured the best approach was to simply top it up with some of the vermicompost. Any cocoons and baby worms I noticed were placed back in the storage tub. 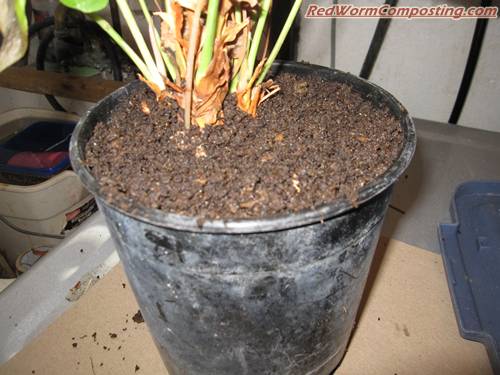 This may end up being a case of “too little too late” unfortunately, but I figured it was at least worth a try! I’ll be sure to keep everyone posted.

As for the rest of the vermicompost – I want to remove as many baby worms from it as I can before using any more of it. Normally, I wouldn’t worry too much about this myself since I have lots of Red Worm habitat out in my yard (so any lost worms would like find a home pretty easily), but I know plenty of people are concerned about losing worms/cocoons in vermicompost. The idea here is to lure all the worms up to a zone where I’m putting a small amount of food waste (in this case some carrots strips that have been in the freezer) and then scooping them out.

All I did was dig a shallow trough, laid in the carrot strips, then covered with some vermicompost. 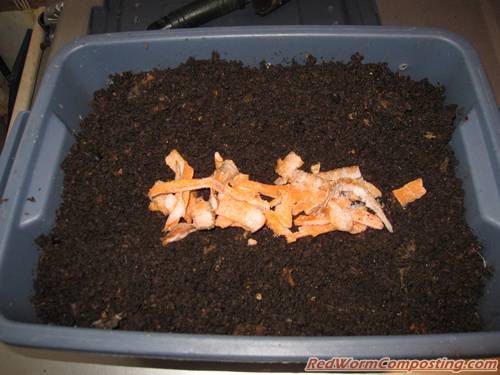 Hopefully the presence of the waste will also stimulate the hatching of the remaining viable cocoons in the vermicompost as well.