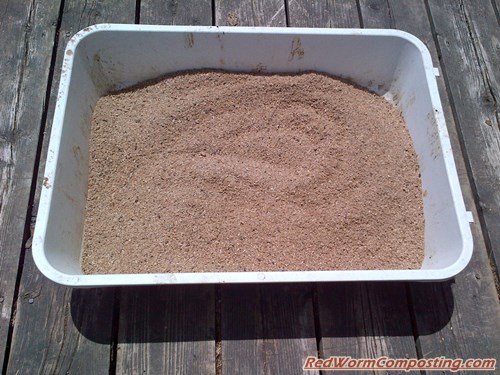 I recently wrote about my newly-discovered (thanks to helpful RWC readers) “ultimate” material – wood pellets. As I said, I think these pellets have a lot of potential as both a compostable kitty litter AND a vermicomposting bedding material – especially given how inexpensive (relatively speaking) they are.

When I first laid eyes on the pellets I really wasn’t sure how they would work as a kitty litter. Straight out of the bag they look a lot more like some type of animal feed than any type of litter I’ve seen. I suspected that my cats would not appreciate the feeling of the sawdust cylinders under their feet, and would therefore avoid using a litter box containing them.

Nevertheless, I proceeded to fill one of their two litter boxes with them (keeping the other one filled with the regular clumping litter) and waited to see what would happen.

Surprisingly enough, at least one of them DID actually start using the box (I suspect it was only one of them since the other box was still being used as well). There were a couple of interesting things I noticed right off the bat:

1) The pellets turned into sawdust as they became moistened (as mentioned in another post, I missed some key info shared in a comment by “Priswell” about this) – thus looking (and probably feeling) much more like a typical litter.
2) The litter box did not smell! (it takes very little time for one of our clumping litter boxes to start smelling since these cats fill them up pretty quickly)

Very excited about all of this, I ended up leaving the litter to sit for longer (without cleaning) than I normally would have with one of our clumping litter boxes. This morning one of my cats decided to let me know he wasn’t quite as impressed as I was, leaving a delightful-deposit on a sheet of cardboard sitting on my basement floor (I was at least grateful he put it there and not any number of even-less-desirable locations! lol).

I decided it was time for a “Plan B”.

It just so happened that I had converted a bunch of the pellets into sawdust (for some worm bedding experimentation) and left it sitting outside in the sun. Today I made an effort to dry it out further (in a shallow black tray sitting in direct sunlight). I then mixed in two scoops of chick starter (great idea shared by “Kim from Milwaukee”), along with a handful of screened vermicompost. 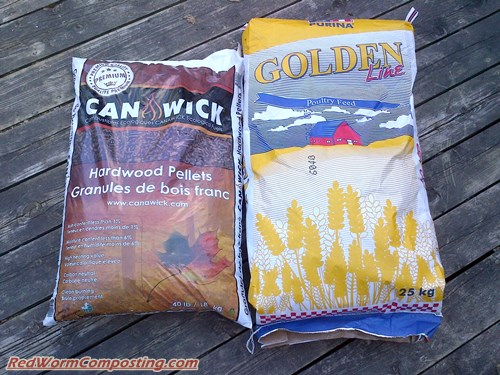 As you can see in the first image, it now looks a lot more like an actual kitty litter – so I’m hopeful the cats will start using that box again. The chick starter should help to wick up moisture (Kim was saying she’s been using it straight as a clumping kitty litter) and perhaps help to provide food/habitat for microbes.

That’s where the vermicompost comes in – my hope is that it will help to cut down on odors even more. Compost can be an excellent bio-filter material – and I’ve seen first-hand evidence of just how well “living materials” like this can help to cut down on odors in a vermicomposting system, so ya never know! I may need to tweak the proportions of each component next time around, but I’ll be interested to see how this mix works in the meantime!

In case you are wondering about the partially-used litter and pellets I started with, they are now in my new experimental kitty litter vermicomposting bed – something I’ll be writing about in another post.