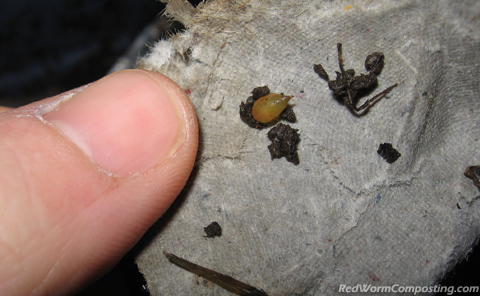 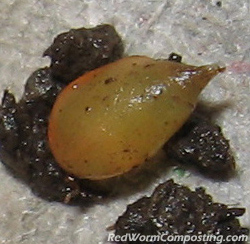 As mentioned at the beginning of the month, I now have a couple of small bins containing European Nightcrawlers (Eisenia hortensis).

The bins I used to house the worms are the same systems I set up for my first two worm composting videos. Even though both bins were very well-aged (in fact, I could no longer find any evidence of food waste in either), the Euros seemed somewhat unsettled when I first added them – almost certainly due to shipping stress (which is inevitable) and perhaps also the fact that they were raised primarily on a manure diet.

In an effort to discourage too much roaming I added a decent layer of shredded egg carton cardboard (my absolute favourite for vermicomposting) in each. This material absorbs moisture very readily, and will create a much drier atmosphere above the main composting mass – gradually over time this cardboard will completely moisten and be broken down (worms love it), but in the meantime the worms seem more than happy to remain in the wet materials down below.

After doing my 4-worm experiment inspection this morning I decided to check out my Euro systems to see how they were doing. I was very happy with what I saw. Not only are the worms no longer roaming around the sides and lid, but much of the waste materials and wet bedding has been processed (I saw lots of worm castings). When I first opened the bin I even caught two worms mating. I tried to get a picture but it didn’t turn out as nicely as I had hoped – I will aim to get some good mating pictures at some point.

Seeing the mating inspired me to dig around for cocoons. As you can certainly tell from the photos above, I did indeed find them – quite a few in fact! Very exciting stuff! I’ve seen (and written about) Red Worm cocoons before, but this is my first experience with E. hortensis reproduction. I’m actually quite surprised to see just how quickly they are producing cocoons. I’ve read quite a bit about the “slow” reproductive cycle of Euros, so I wasn’t expecting to find any evidence of mating for quite some time.

Of course, we’ll still need to wait and see how long it takes for juveniles to hatch (and then mature), but this is good progress in my books nevertheless!

Anyone who has found Eisenia fetida (Red Worm) cocoons should be able to tell from the first photo that these are definitely larger – not too surprising given the larger size of this species (E. hortensis, that is). It certainly made things easier when I tried to find them in the bin.

Rest assured, I’m going to keep close tabs on both my Euro bins from now on and will report back as soon as I find any baby worms!