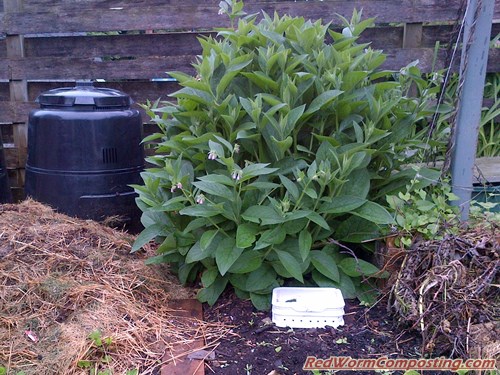 Things seem to be moving along nicely in this system. Initially the cat waste zone was colonized by a variety of critters other than worms (including lots of springtails), but I’m happy to report that I’ve been finding lots of small Red Worms in there now, and the waste materials themselves seem to be disappearing.

I am starting to wish that I had used a bin more like the one set up for my “Vermi-Fertilization & Watering System“. That size of bin would make MUCH more sense for something like pet waste, which is never in short supply for those with cats (especially if adding compostable litter as well) or dogs. Even with the “experimental” quantities I’ve been adding, things are getting a bit cramped in there. Hopefully the overall level of material in the bucket will settle down a fair bit more as the worm population grows and they process more of the original bedding etc.

While I’m not going to claim that this system is entirely responsible for the health of the comfrey plant sitting behind it (I can thank ALL the nearby composting systems for that), it is clear that this plant is going to reach Jurassic proportions this season! It hasn’t even reached the blooming stage and it’s already far bigger than any of the (blooming) comfrey plants in my other beds. If you are familiar with the size of an Earth Machine composter (black bin in background) you should have a feel for just HOW big this plant is getting!

Speaking of composter – believe it or not, there is actually another (neglected) composter sitting directly behind the comfrey plant! Kim-from-Milwaukee’s recent (awesome) tip about using chick starter as a compostable kitty litter has me thinking I should overhaul that bin and once again set it up for compostable kitty litter processing. I’ve been getting SO fed up with sending the clumping clay stuff to the landfill. My cats (one of them quite old now) have been using the stuff up like crazy – which has been driving ME crazy! LoL

Anyway, I’ll be sure to continue keeping everyone posted on the pet waste vermicomposting front!