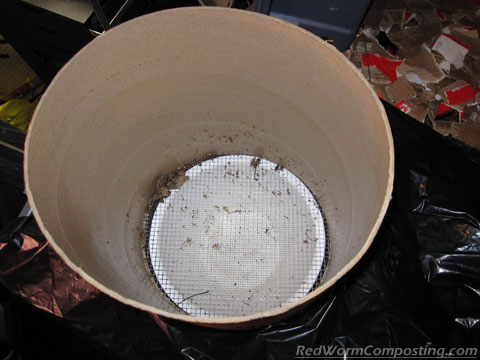 SSUBWHT with plastic bowl directly beneath it

A couple of weeks ago I wrote about my ‘Super Simple Ultra Basic Worm Harvesting Tube‘ – basically my attempt at creating a passive worm harvesting system that actually works. Well, I hoped it would work, anyway.
😆

As I wrote in the post, the system didn’t work at all for me the first time I tried it out. Even with a moist environment down below (provided by wet paper) and a hot light shining for hours above, the worms just didn’t seem interested in going down.

Something that came to mind as a potential problem (also suggested by one of our readers) was the fact that there was an air space between the screen and the paper below. In other words, the worms would basically have to fall a short distance – probably something they would try to avoid whenever possible. I also think I simply had too much material on the screen, so there wasn’t as much of a threat to the worms (and they were happy to stay where they were as a result).

Based on my assumptions, I decided to try the system again – but this time with a modified approach. I found a plastic bowl that almost seems like it was made to go with the SSUBWHT! It fits very nicely underneath, with almost the same diameter. I had to prop it up on a roll of tape in order to have it making contact with the screen, but that certainly wasn’t a major inconvenience.

I filled the bowl with moistened strips of newsprint and fall leaves – enough so that these materials would end up pressed against the screen. I then added a much smaller amount of worm bedding (with worms) – this time with Red Worms (not European Nightcrawlers) – on top of the screen, and positioned the lamp over top in the same manner as before.

I then proceeded to totally forget about it until later in the day – which probably helped.

MUCH more promising than last time! I am happy to report that there were a lot of worms down in the bowl. Initially I thought it had been 100% successful, but then when I emptied out the upper compartment I realized there were still a fair number of worms in this material.

At least we are getting somewhere!

Some other things I am planning on testing out…

I’m confident I can get the system working even better – my goal of course is 100% transfer of worms. Providing a food source down below may be the missing link.

How Often Should I Spray My Worms?