Things have been coming along nicely in my outdoor Worm Inn Mega system.

I wrote about adding a big batch of thatch mixed with food waste in my last update. The worms ended up taking longer to move into it than I predicted – but that’s the beauty of Worm Inns! As long as the worms have some safe habitat to hang out in, you can easily get away with “overfeeding”.

Of course they eventually did move in, and had processed quite a bit of the food material by the time I checked on the system yesterday.

With everything looking good, I figured I should add a new batch of food yesterday as well. This time I didn’t bother mixing in any thatch. I simply dumped a bag of frozen-then-thawed food waste on top of the upper hay layer… 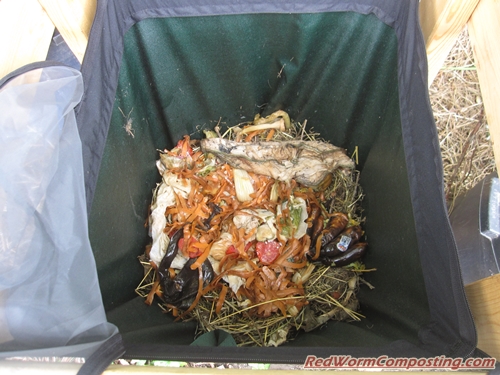 …then added another layer of moldy hay on top. 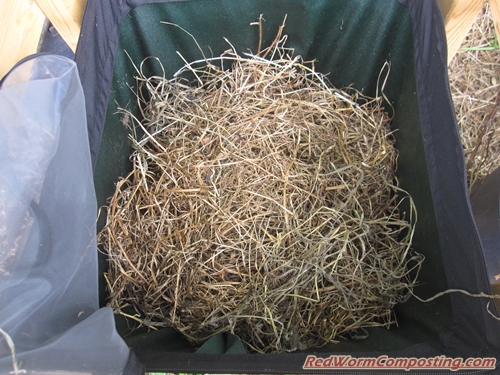 I’m pretty sure this latest batch of food had fruit flies in it (due to sitting outside for several hours), but this isn’t even a huge deal in an indoor Mega (due to the zippered lid), so I’m certainly not concerned in the least.

I’m happy to report that I found a great lid for keeping the Mega protected from the rain. It is from an outdoor kid’s play table (that we never bother to cover). Good timing too, since we’ve had quite a LOT of the wet stuff since my last update. 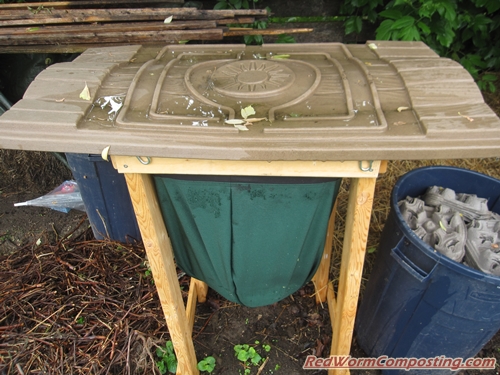 The sun still shines on the Mega first thing in the morning, so I’d like to do something about that – perhaps hang a sheet over it – but all in all, I’m pretty happy with how well the system is protected from the elements.