Amazing how time flies during the summer!

It’s been more than a month and a half since my last Worm Inn Mega update – and sadly, it’s probably also been that long (or at least pretty close to it) that I have been neglecting it.
😆

But this is actually the “Tale of TWO neglected Worm Inns” – one FAR more neglected than the other!

Today I decided to take my Regular Worm Inn (last update was in February!) outside and transfer the entire contents over to the Mega.

As you might expect (given the breathability of these systems), the contents were very, very dry. In all honesty, I can’t remember what all I’ve done with the Regular Worm Inn since February (it has been sitting in a corner of my basement with some boxes on top of it), but I’m pretty sure I fed it at least once, and know I watered it once or twice.

I’ll be honest, when it comes to long-term neglect, a basic enclosed plastic worm will usually handle it FAR better than a Worm Inn. I might go so far as to say that plastic bins can almost thrive MORE when you neglect them (than when you give them a lot of attention).

I did find quite a few tiny worms in the Regular Worm Inn (and who knows how many I missed). I never cease to be amazed by the resilience and adaptability (is that even a word?) of these creatures I tell ya! 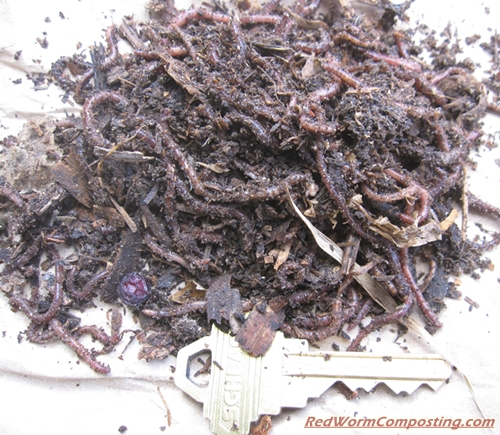 Conditions in the Worm Inn Mega weren’t nearly so dire. There did seem to be a reasonable amount of moisture down towards the bottom – not to mention a very healthy population of flying pests. Unfortunately, when it comes to outdoor systems, there is virtually nothing you can do to prevent fruit flies, gnats and various relatives from becoming established.

But really – does it actually matter?

My bigger concern revolved around the fact that I could not for the life of me seem to find a single Red Worm when I started digging around. We’ve had some really hot, dry weather for and extended period now – so I was starting to wonder if I’d managed to kill them off.

As it turns out, I ended up finding them all concentrated down in the very bottom of the Mega – likely the zone with the highest moisture content.

Confident that there was indeed still a decent population of worms (albeit small ones) in the system, I went ahead with my transfer (from Regular Worm Inn) plans.

I started by adding a bunch of unprocessed bedding + dry living material (which I realize might sound like an oxymoron. Truth be told, there was still enough moisture in it to maintain enough of an ecosystem to make it useful) 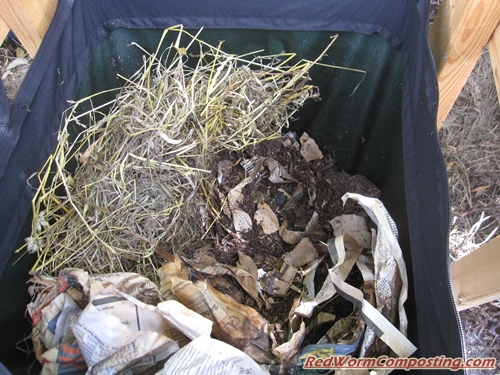 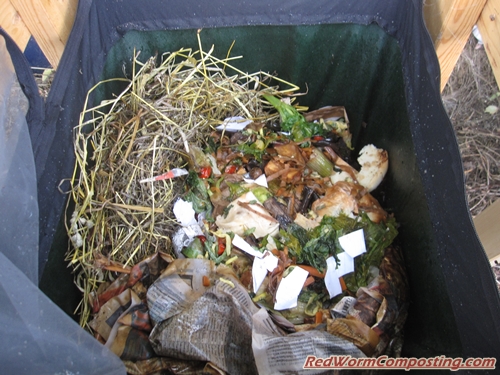 Next I mixed in a lot more of the dryish living material before covering the food zone with hay, and then all the cover newsprint strips from the Regular Worm Inn. 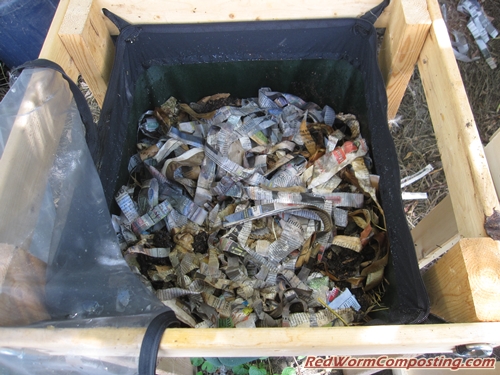 One final dose of water and I felt like things were back on track with the system. I wasn’t all that thrilled to see water starting to drip down out of the bottom of the Mega, but I don’t imagine that leakage will last for too long.

NOW hopefully I can actually get this system working the way it’s supposed to! I may start adding ALL my kitchen scraps to it over the next few weeks to see how much of a difference that makes.

Should be interesting!
Stay Tuned.
😎