With my WF-360 check-up yesterday, I figured it was only fair to see how my poor, neglected Worm Inn worms were doing today.

My last feeding (~ 3.3 lb of shredded carrots) was back on Jan 5th and, other than the occasional addition of water, the system has basically been left alone since that time…and it shows. The level of material in the Inn has gone down quite a bit, and while there was certainly some evidence of there having been shredded carrots in there at one point, there really wasn’t much.

I was happy to find LOTS of worms down below in spite of the less-than-optimal conditions. Aside from processing the food that’s been added, they’ve clearly been munching away on the shredded cardboard bedding as well.

Before feeding today, I decided to water everything down a bit since it was looking pretty dry. 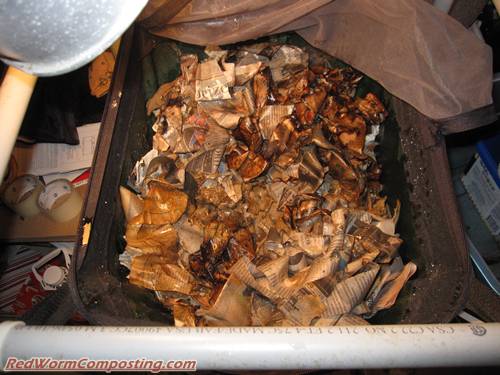 Given how low the level of material was, I decided to use the old cover layer as my base layer below my new food materials. The amount of food I added today was 1.039 kg (2.29 lb). As was the case yesterday, I didn’t have access to any (thawed out) frozen food scraps so I decided to make do with a fairly fresh collection of scraps I’ve been collecting for the past day or so. Again, I made sure to compensate for this by cutting everything up as best I could with a pair of heavy duty scissors (as you can see below, that cluster of leaves at the top of a pineapple is really tough!!). 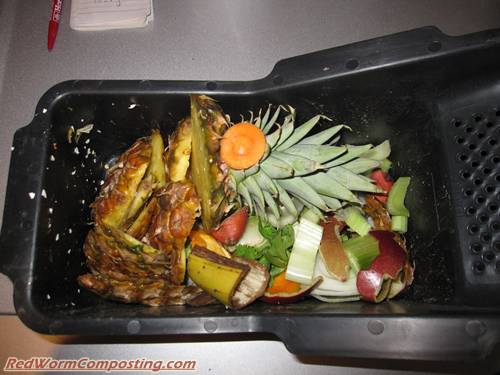 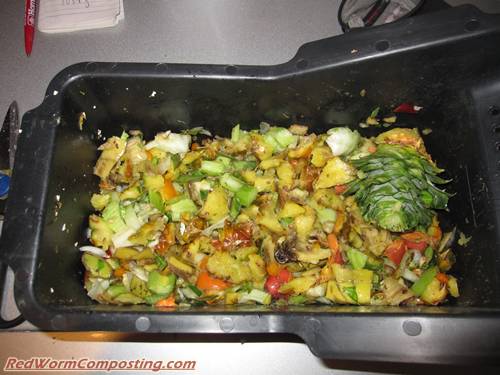 Once I was satisfied with how finely chopped everything was (minus the pineapple leaves! lol) I simply spread the materials over top of my base bedding layer, before adding a brand new layer of dry bedding over top. 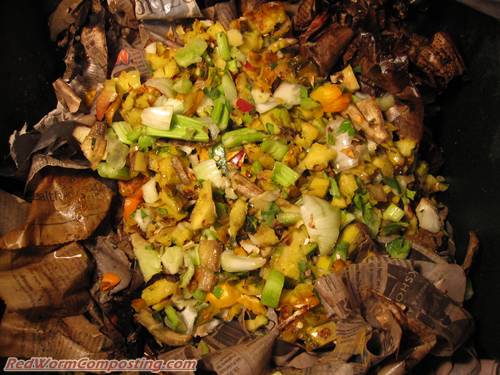 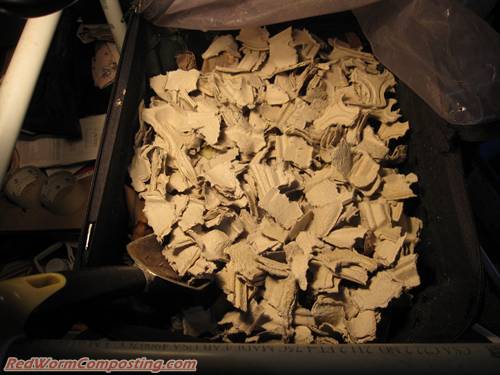 My aim this time around had been to treat this Worm Inn as a “normal” system – rather than attempting to overfeed as I did with my “Overfeeding Challenge“. Well, it seems I’ve ended up down in the opposite direction so far!

Time to start adding waste materials on a much more regular basis, that’s for sure. With my flying pest problems now behind me (he wrote as he knocked on wood – lol), this shouldn’t create ANY problems!