I wanted to post a quick Worm Inn Journal update to bring everyone up to speed before the weekend. As you may recall, I added quite a lot of waste (7 lb or so) all at once back around the middle of the month (November, that is), along with the contents of two of my particle-size-experiment bins. The level of material at that point was actually up quite close to the screen!

I haven’t added anything (other than some water) since then, and it’s amazing how far down the level has dropped.

The not-so-hot news is that my super-mellow approach with gnats and fruit flies this last little while has ended up coming back to bite me – BIG time! I now have an unbelievable infestation of fungus gnats in the Inn. As always, I LOVE the fact that they are basically trapped in there – much nicer than the experiences with plastic bins where they are coming out the air holes en masse etc etc! 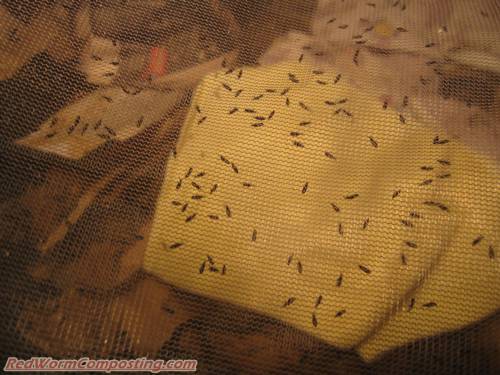 Of course, it’s also a good opportunity for me to really put these parasitic nematodes to the test (BTW – I will provide an update on the nematode-fruit-fly front next week). Yesterday I mixed a substantial quantity of the nematodes with water and gradually poured it all into the system. I have a bucket of coco coir sitting below to catch all the run off (actually transferred some of this wet coir over to my Worm Factory system since it likely has a decent number of nematodes in it).

I’ll likely hold off on adding more food waste for the time being, at least until the gnats are a bit more under control. Should be interesting to see what sort of impact all those nematodes have!

One thing I really “like” about fungus gnats is that they move towards light sources very readily – this means I can position a lamp over top of the system and loads of them will congregate up on the screen where the light is shining. All I need to do then is suck them all up with the vacuum! Should help me put a serious dent in the population of “breeders”.
8)

Anyway – that’s basically all for now. I’ll try to provide an update on the fungus gnat situation sometime next week.