I’m definitely overdue for an update re: my Worm Factory 360 bin! Things have continued to hum along very nicely in the system since my last update. I haven’t really added a huge amount of food waste, but everything that’s been added has ended up getting consumed quite rapidly.

I’ve decided to start adding more food, and on a more regular basis moving forward. I will also start monitoring the weight of wastes that get added. Today I used some materials that had been sitting in a bag out on my deck. Temps are now a fair bit below the freezing mark at night, so while the stuff certainly isn’t freezing solid, I think I’ll still see some of the same benefits as I would if it had come from my freezer.

I didn’t have an exact weight in mind – I just want to end up with a “decent amount” of food wastes being added today. This turned out to be 1.39 lb worth. The black plastic contraption that came with the WF 360 (name escapes me now) worked really nicely as a scrap mixing tub and a weigh boat (and yes, I DID remember to tare it before adding the wastes! lol). 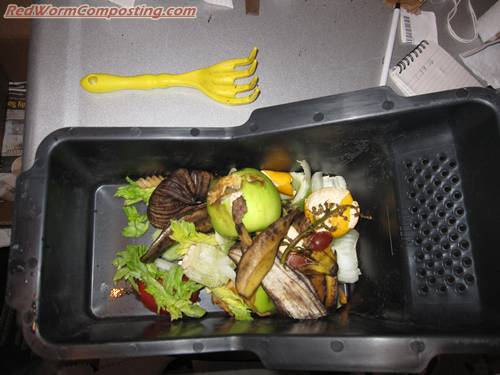 Once I knew the weight, I spent some time “optimizing” the material for faster worm processing. I cut it up as much as possible, then mixed in some shredded brown paper, and a small amount of rock dust. 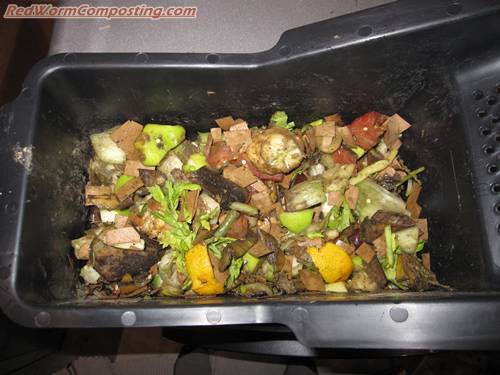 Adding it to the bin simply involved created a shallow depression, dumping it in, spreading it out a bit, then covering it up with bedding materials already in the system along with some new dry bedding. 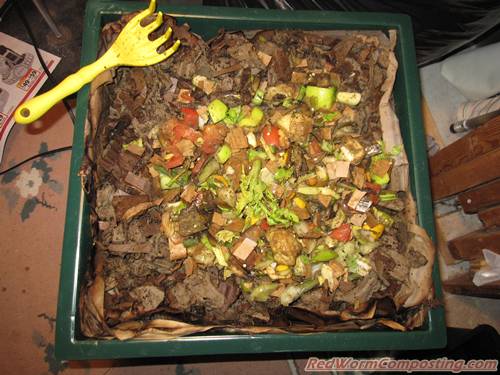 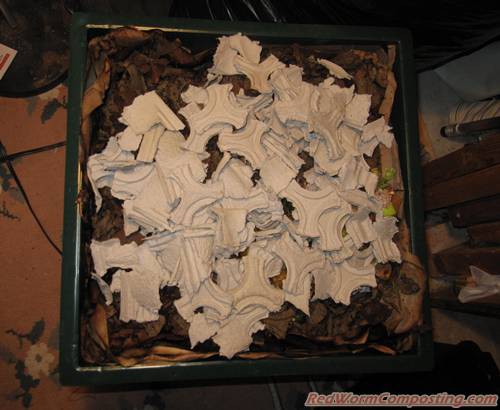 I’ll be very interested to see how quickly this mix gets processed. Ideally, I’d like to be adding more waste materials by the middle of next week.

There still doesn’t seem to be any worms finding their way down into the reservoir, so my newsprint floor is likely still mostly intact.

IMPORTANT – Don’t forget that today is the start of yet another Worm Factory 360 contest! I thought it would mean that participants would have to fill out another survey, but when I checked out the contest page today I saw that it’s something totally different (cool)! I’m really glad the folks at Nature’s Footprint have decided to mix it up a bit – definitely keeps things a bit more interesting!
Be sure to check it out for yourself: Worm Factory 360 Contest Page

NOTE: I always forget to mention this (sorry!), but unfortunately these contests are limited to those living in United States and Canada.