Hi Everyone – I wanted to add a quick follow-up to yesterday’s Worm Factory post (see “Worm Factory 360 Set-Up“). There were some important things I forgot to mention. 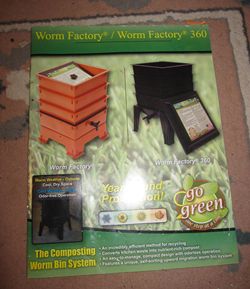 Some of you may have wondered about the coir and pumice that comes with the Worm Factory 360 start-up kit. While I had always intended not to use them right off the bat – I DID at least want to make mention of them. These are an important part of the set-up process when you follow the directions outlined in the manual.

Speaking of the manual – I also wanted to make mention of the fact that – while I myself am not a manual-sorta-guy (nearly 12 years of vermicomposting makes me a bit more set in my ways – haha) – I AM very impressed with the quality of information contained in this booklet! If you are new to vermicomposting I highly recommend you follow the directions outlined. Unlike some other instructions I’ve seen for setting up a new system, these ones seem to cover a lot of the areas I myself feel are important: 1) proper food prep, 2) lots of bedding, 3) “living materials” etc. There is also a fair amount of good maintenance/troubleshooting info and general vermicomposting info.

Anyway, in light of the fact that I was planning to write this follow-up, I decided to go ahead and put some of the coir and pumice to good use today (rather than waiting for a little while). I know I came across the information on what exactly the pumice is for – pretty sure it is a bulking agent and odor absorbing material – but I just can’t track it down now. 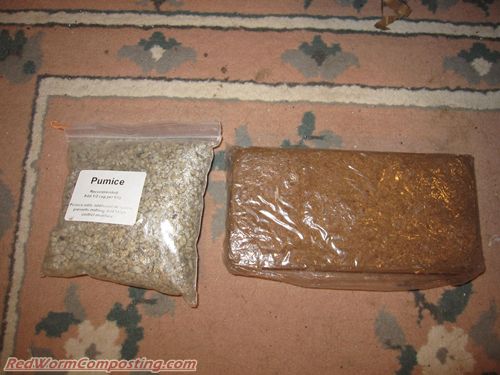 I must say I was REALLY impressed with the coir brick. I dropped it in some water and was astounded to see a big fluffy mass of coir springing forth right before my eyes! I’m definitely used to waiting for awhile for a brick to expand (likely part of the reason I didn’t want to bother with it when first setting up). Pretty cool! 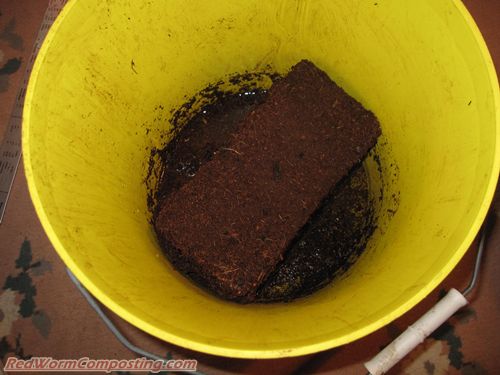 I also wanted to mention that I added some more food waste. There was a semi-rotten hunk of cauliflower lurking in the bottom of one of my crisper drawers (lol) so I nabbed it and chopped it up into small pieces. This reminds me – yesterday someone expressed surprise regarding the size of the pumpkin chunks I was adding to the bin. What I failed to mention was that – aside from these pieces being quite soft – when I mixed them with the bedding materials they broke down a fair bit more. I do have some chunky stuff still – but certainly not anything to worry about. Cutting up materials (and otherwise breaking them down) as much as possible before adding them IS a really great strategy though – so please keep that in mind. 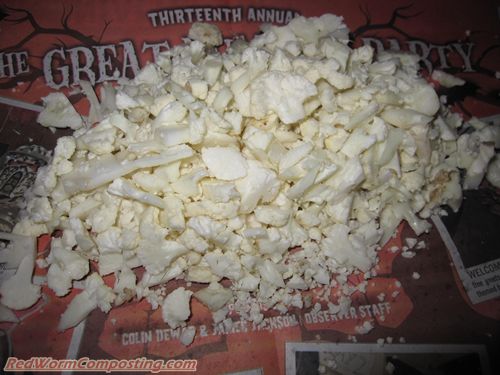 I also decided to add some of the nice rock dust I received this past summer since it should help to stimulate some more microbial activity, add trace elements and provide the worms with some grit (for their gizzard – to aid digestion). In the WF-360 manual they mention “crushed egg shells and/or sand” – these (especially the egg shells) can be helpful as well. Also, please keep in mind that NONE of these amendments are vitally important for worm bin success – a simple food-waste-with-bedding system can do just fine as long as you follow the basic principles of effective vermicomposting.

Just so you know, I added about half of the coir and a small quantity of the pumice (likely pretty close to the 1 cup mentioned in the guide). 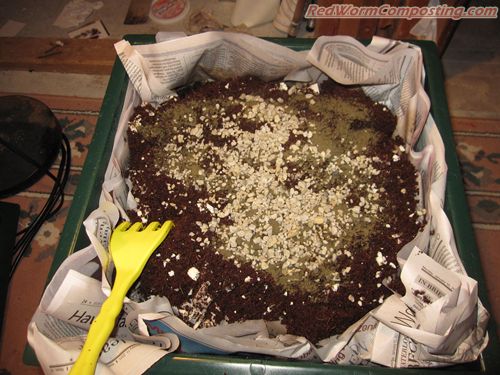 I then mixed everything in very well. 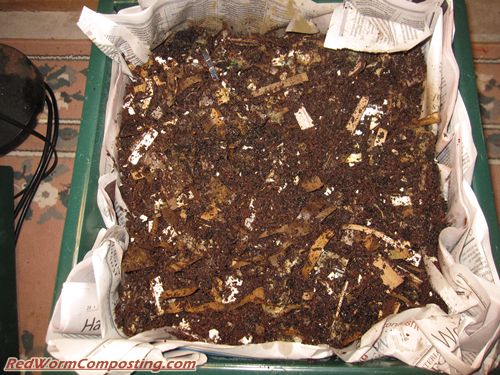 Before doing any of this, I had the chance to dig around in the bin a bit. I was happy to see that the worms were already munching on the pumpkin waste. I saw the odd fruit fly – will likely see a LOT more of them before too long (haha) – especially now, since the materials will probably warm up a bit.

One other quick thing to mention before I sign off here. I had wondered (in my first post) what the special aeration features were for the Worm Factory 360. Kate informed me that it’s primarily the way the lower tray sits on the base, and the way the lid sits on the upper tray. In both cases there ends up being an air space (I noticed this with the lid), so there is the potential for a nice flow of oxygen from the lower reaches up through the trays and out underneath the lid! The key of course is to make sure we don’t let materials in each tray get too wet and packed down! I’m sure we’ll talk more about this as I start to work my way upwards over time.

OK – that’s all for now. I’ll likely provide another update towards the end of next week!
8)