I finally got my Worm Factory 360 set up this morning. Whoohoo!
🙂

The first thing I did was set up a super-thick newsprint floor, sprayed with water to make it more worm-friendly and to help it stick to the sides and bottom. My aim here is to avoid having worms roaming down into the reservoir right off the bat. As you can see I tried to create a sort of newsprint container by folding it up the sides. 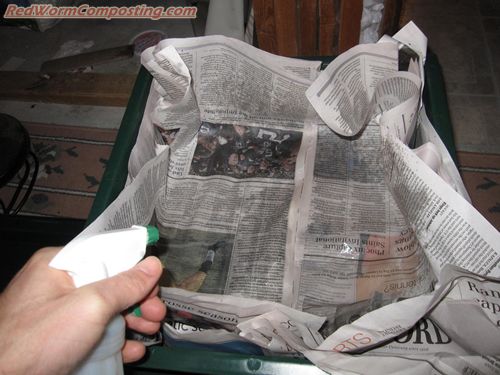 Speaking of worms in the reservoir, I realized after putting up my last Worm Factory 360 post that I totally forgot to mention the “worm ladder” – shown below. It is a black plastic insert that fits down in the reservoir. The idea is that it provides the worms with a way to crawl back up into the first tray. 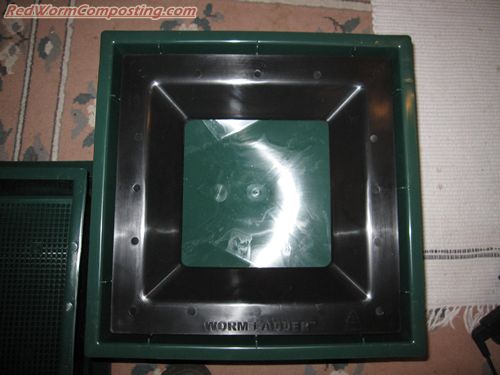 I had plenty of options as far as starter “food” goes, and settled on some pretty ripe pumpkin “guts” that had been sitting in a bowl ever since our family pumpkin carving event last Sunday. I think I may try to avoid doing that again (letting it sit) – lol – WOW! Pretty foul I tell ya! As you can see, it had a nice growth of mold as well. 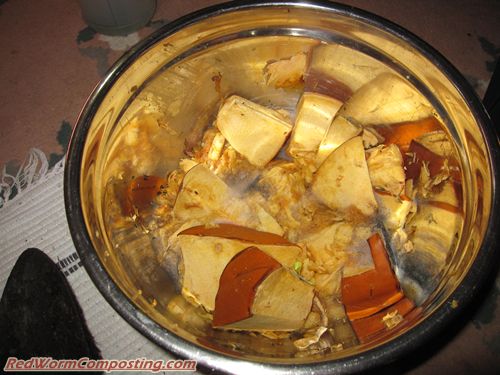 Oh – did I mention that it was also crawling with fruit flies and fungus gnats? Yep – as per usual, I am trying to create some “commonly encountered problems” right out of the starting gates. I’m not overly concerned – partially because the cooler temps down in the basement seem to be limiting the growth of the fruit flies, and partially because I have my trusty parasitic nematodes to help me!

By the way – in my recent “Parasitic Nematode Update“, I mentioned that the fruit flies seemed to be hatching a fair bit more in the nematode infested system (aka my “nematode farm”) and the larvae seem to be crawling up the sides. Well, I looked in today and it’s absolutely LOADED with adults now and I can see some dead larvae on the sides – even thought I could see nematodes coming out of some of them. So, the good news is that the nematodes DO seem to be effective against fruit fly larvae – the bad news is that it will likely seem like your infestation is getting worse before you see any sort of population crash. Just something to keep in mind if you plan on using these nematodes agains fruit flies!

Ok – getting back to the set-up…

I mixed the pumpkin guts with the bag-o-shredded-paper/cardboard that came with the bin, spraying it with a bit more water as well. The result was something akin to my “homemade manure“. I then added the stuff to the first tray (sprayed some more as well). 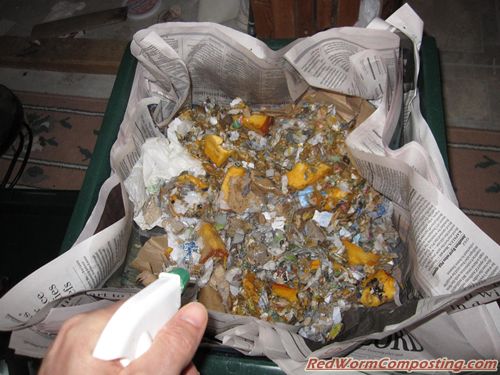 I used my typical method for stocking worms – that is to say that I simply dug wormy material (what I might also refer to as “compost ecosystem”) from another bin and mixed it in to the food/bedding zone. The bin I took the wormy stuff from had received a fair quantity of coffee grounds (so some additional food value) and – LUCKY ME – just so happened to have a nice little population of fungus gnats as well! My nematodes are going to be working over-time! 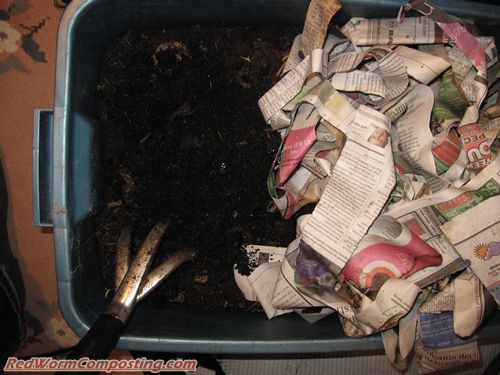 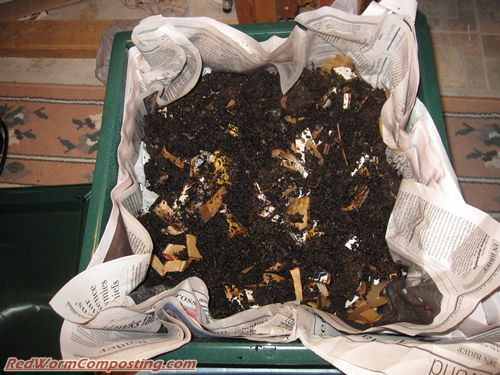 The last thing I did before putting the lid on was add some additional shredded cardboard over top (oh – I should mention that I also added some of this material – and mixed it in – after the homemade manure was added). 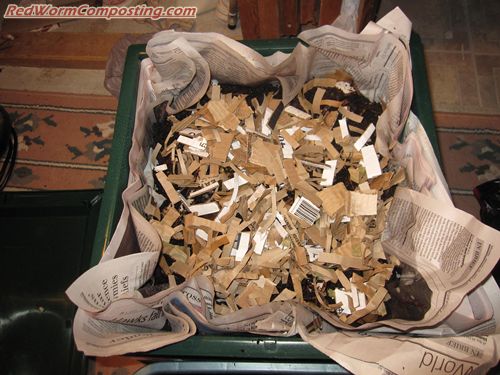 Now I will basically just let the system sit for the next week or so. I normally would do a set-up with food and bedding and actually let it sit before adding the worms but like I said, the pumpkin waste was already pretty ripe (pumpkin/squash family plants tend to break down quickly anyway – so great if you are in a hurry) – plus I was adding plenty of good habitat/food material along with the worms so it’s not like they’d be starving anyway.

I’ll be sure to post another update next week!

UPDATE:
1) Almost forgot…in case you are not on the RWC newsletter list, or just happened to miss my last message – you can enter yourself a Worm Factory 360 prize draw if you visit our page on the Nature’s Footprint website and fill out the survey. Here’s the link:
http://naturesfootprintinc.com/redwormcomposting

2) Please also refer to this follow-up post: Worm Factory 360 – Important Follow-Up
(There were some important things I forgot to mention)