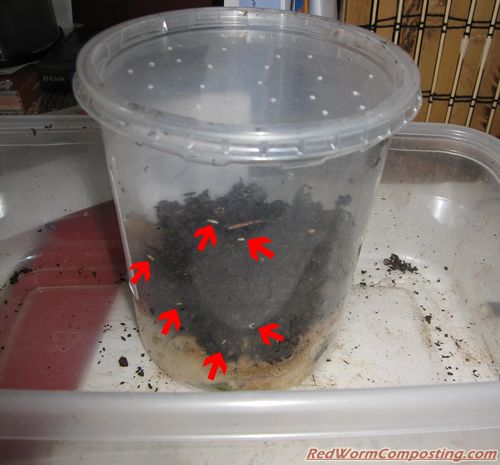 Hi everyone! I don’t have anything Halloween-themed for ya today – but it IS kinda creeeeeepy!
OR…maybe it’s just me!
😆

I wanted to provide a bit of an update on the Steinernema feltiae (parasitic nematode) front. As mentioned in my last nematode post (see “My Parasitic Nematodes Have Arrived!“), I decided to see if I could use larger maggots as hosts for these guys since each one would have the potential to support a LOT more nematodes, and I figured they could more easily be used as a sort of transportation vessel, helping me transfer the nematodes to new systems.

Well, I THINK the nematodes do in fact attack larger maggots. After adding some to my maggot holding container, I started noticing some change in behavior – for the first time, some maggots ventured out of the container – and just generally, a certain sluggishness. Rather than waiting for conclusive evidence, I ended up adding maggots and their habitat material to one of my little gnat / fruit fly farms (pictured above). By that point, the “farm” was humming along quite nicely with loads of little larvae crawling around in the lower reaches of the container.

Right after adding the maggot mix, I decided to add even MORE nematodes for good measure (wanted to leave no question of there being loads of them in the system) before leaving the bin to sit for a few days. I decided to check on the situation today, and so far it looks the nematodes have got the larvae on the run (quite literally – haha). As shown in the photo, quite a few of the larvae are now crawling up on the sides of the container! There may have been the odd one up on the sides before, but this definitely seems to be new behavior for the most part. I’ve also noticed an increase in adults in the bin – this actually seems to support some observations made the last time I tested these nematodes. After adding them to my fungus-gnat-infested bins, rather than finding lots of dead larvae it seemed like I was finding lots of dead adults looking like they had been invaded by something. It actually does make sense that flying insects would respond to a threat this way – almost like a last ditch effort to help ensure the success of future generations!

Another positive sign is the appearance of countless tiny worms (obviously the nematodes) on the inside walls of the “farm” bin. I have to hold the container up the light in order to really see them – but I can see them wiggling away when I do, so I’m confident they are doing just fine. There are loads of larvae still moving around in this system, so I think this could end up being a fantastic stock system for the nematodes. Now I just need to make sure I have at least one or two more thriving larvae bins set up for future transfers so I won’t run the risk of exhausting my nematode “food” supply! lol

All this larvae and nematode farming aside, I still obviously need to properly test the effectiveness of the nematodes against our tiny flying friends. I am hoping to set up some small fruit fly breeding systems with shredded paper for bedding and banana peels for food, and then add a bunch of the nematodes (still LOADS of them in the original bag I received them in) to some of the containers to see if there is a noticeable decrease in the number of adults etc.

I will certainly keep everyone posted!
8)