Just a quick update for all those of you following my Worm Factory 360 series. As you may recall, I got the system up and running last week, and have been taking a pretty laid back approach with it. I didn’t add a huge amount of “food” (primarily just some semi-rotten pumpkin) – nor did I start with a huge quantity of worms. Since getting things rolling, I have not added any more food and – apart from a little digging around – have left the bin essentially undisturbed.

The other day when I opened up the bin I noticed some fluffy white fungal growth up on top. I was actually quite excited, and ran to grab the camera, since I knew it would provide me with the opportunity to touch on a very common concern with new vermicomposters. These sorts of growth are VERY common early on – especially if you do an “aging” period prior to adding the worms.

For the most part – assuming the growths are not accompanied by a foul stench (likely indicating you’ve added WAY too much food) – this is nothing to worry about. Really just a matter of one particular organism taking advantage of available resources! Once the worm population becomes established, these sorts of growths tend to be kept in check without any further help from us (if not, again this can indicate that you are adding too much food at once, or at least food that is not well-prepared for the worms). 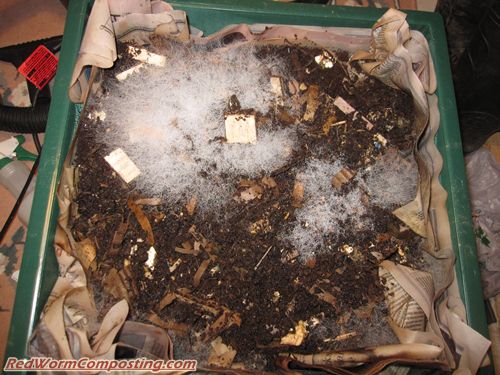 When these growths do pop up, all you do is take your trusty garden hand fork (one of these actually comes with the WF-360 bin) and mix everything up a bit. This breaks up the fungal mycelium (what you see) and helps to avoid more growth and potential spore production (best to avoid this).

So far I have been quite impressed with this bin. Everything smells good (earthy) and looks good down below (active worms, wastes being consumed etc). The worms even seem to be getting bigger! I’ve sprayed the contents 2 or 3 times since last week – it hasn’t been drying out by any means, but I can tell that it will easily handle more moisture (some moisture down in reservoir, but no pooling). I haven’t yet found any organisms down in the reservoir either, so I think the newsprint false bottom is still holding out ok!

Oh – just remembered one other important thing. I decided to add the contents of one of my small nematode farms to this bin in an effort to (hopefully) keep the flying pest populations in check. While I’ve seen the odd fruit fly coming up when I open the lid, so far there really doesn’t seem to be any sort of remotely-serious infestation (quite surprising, given how careless I was with the pumpkin waste before adding it). Hard to say for sure if the nematodes are helping, but regardless, it’s nice to not have clouds of fruit flies flying up into my face when I open the bin!

Anyway – that’s all for now. I’ll be sure to post another update in a week or two.
8)

**IMPORTANT REMINDER** – If you haven’t already done so, don’t forget to get registered for this month’s WF-360 draw that’s going to take place on November 15th. Just fill out the short survey on the RWC contest page (on Nature’s Footprint website) and you are good to go! Here is the link:
http://naturesfootprintinc.com/redwormcomposting