The week before last, I wrote about getting my Worm Inn back up and running (see “Worm Inn Journal-11-04-11“). As is the case with my new Worm Factory 360, I’ve been taking a pretty mellow approach – well, I guess that is until today!
😆

Since it IS a Worm Inn, this week I’ve decided to add a decent amount of food waste. I raided my chest freezer down in the basement (where I’ve been stock piling waste materials) and, after adding a small amount of frozen lettuce to the Worm Factory (the worms are doing VERY well in there so I know they won’t complain), I basically dumped the rest (likely about 7 lb worth) into the Worm Inn, directly on top of the newspaper strips that were serving as a cover for the composting zone. Of course, I then added a bunch more bedding on top of the waste materials (the image below was taken before the additional bedding was added). 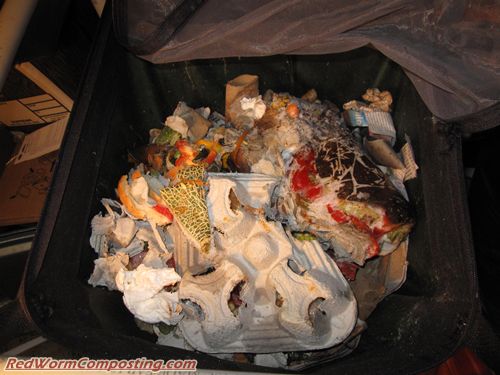 This isn’t intended as the start of an “overfeeding challenge” or anything like that – I simply prefer to add food in this manner rather than smaller amounts on a regular basis. I am sure I’ll now be leaving the system to sit for a little while since the worm population is still quite low – but we’ll see how things pan out over the course of the next week or so. One of the nice things about the Worm Inn is that, as long as you have plenty of absorbent bedding in the system, you can basically add as much waste as you want (within reason). Worst case scenario – it will just become an aging bin for your waste materials. Excellent aeration, and moisture absorption is of course the KEY – so if you did this without any bedding, the results wouldn’t be nearly as nose-friendly!
😆

Something else worth mentioning…

Last week I added the contents of one of my thriving “nematode farms” to the Worm Inn. I am hoping that this serves to provide an ongoing “ounce of prevention” against my tiny flying friends. I’m really interested to see what sort of populations of fruit flies and/or gnats develop (or even IF either of them ends up getting established). There are plenty of them (especially fruit flies) flying around in my basement at the moment (one of the bonuses of creating my little “farms” – haha), so really, unless the nematodes provide some assistance, I am pretty much guaranteed to end up with one or the other (or both).

Anyway – that’s basically it for now!
Will write more soon.
8)

And the Winner is…