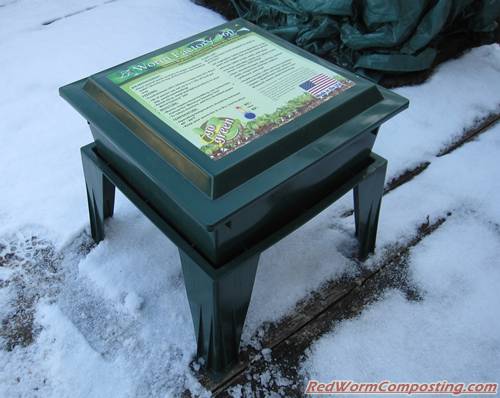 They say a picture is worth a thousand words.

So, yeah…it seems my mellow ways have landed me in hot water…UhhhhGAIN! This time with a different little annoying pest. The day after I added the “1.39 lb” of food waste (see “Worm Factory 360 | 12-01-11“), I noticed lots and lots of fruit flies (more than usual – haha) down in the room where I keep the wf-360 – and, sure enough, plenty of them seemed to be hanging out around the bin!

Obviously, I shouldn’t be too surprised! Raising fruit flies on purpose is bound to land you in trouble eventually, right? lol

OK – joking aside, I should explain that the situation isn’t quite as bad as it looks. My Worm Factory 360 isn’t actually sitting out on my deck in sub-freezing weather – well, at least not anymore! I put the bin out there for a period of time yesterday (perhaps a couple of hours) to see if I could kill off the resident fruit flies. I also worked hard to vacuum up as many fruit flies in the house as I could find (LOTS).

All of this has certainly helped, but I think the main problem was that there were still plenty of fruit flies inside the house, and yes – now that the bin is inside and warm again, it seems they have decided to move in….UhhhhGAIN!

Thankfully my wife is used to my shenanigans (and the critters that seem to follow) by now, so it doesn’t look like I’ll sleeping on the deck myself quite yet – but, I do think it’s time to start focusing a bit harder on getting rid of the FFs! Unfortunately, the nematodes just don’t seem to be up to the task of really keeping them under control (hope to write more about this soon) – especially not in an active worm bin – so it’s back to my “multi-pronged” approach I go.

Needless to say, I won’t be adding more food these week! In their defense, the worms have actually done a great job with the food materials in the bin – so the potential fruit fly real estate has certainly been reduced – but nevertheless, I don’t want to push my luck any farther than it’s been pushed.