Just wanted to share a quick Mega update. I’m sure some of you have been wondering how things are coming along with the system.

Today I decided to harvest some more vermicompost in an effort to clear out some more space. The system has been getting pretty full and heavy.

What’s funny is I ended up removing a concrete mixing tub full of vermicompost from the lower reaches of the Mega, yet it seemed like I hardly put a dent in the total amount of material that is down there. 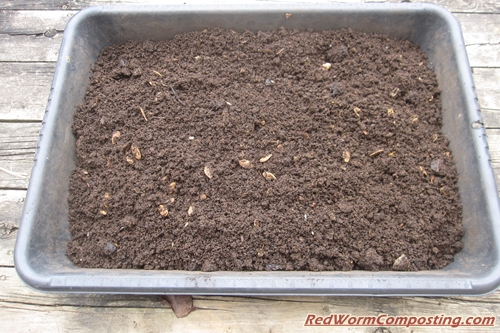 The vermicompost I removed looks fantastic, save for some unprocessed materials that could easily be screened out. I did see some worms, but not a huge number of them.

The process of harvesting made me realize that it is definitely time for a system overhaul, A) because I want to remove all the vermicompost from the bottom and, just generally, see how things look inside, and B) because it’s definitely time to switch over to a wooden stand. Time to stop procrastinating on that front! lol

Don’t get me wrong – I’ve been pleasantly surprised with the PVC stand. I honestly thought there was no way it would be able to hold the weight of a full Mega – and it has passed that test with flying colors (I’ve certainly loaded my Mega right to the top with zero issues). That being said, it’s still not quite as sturdy as I would like it to be. I found the harvesting process somewhat difficult, partially because I didn’t want to dig around too vigorously, for fear of having the system come crashing down on my arm! lol

I am actually REALLY excited to see what sort of worm population I have in there. If the density of worms near the top is any indication, there must be multiple pounds of Red Worms! Pretty cool considering the fact that I simply started the system with worm-rich material (no specific number or weight of worms).

As for the compostable food scraps that would normally be added to the Mega – for the time being, they are being diverted elsewhere. I added some to my new tumbler worm bed, and even more to one of my backyard composters earlier today.

I’m certainly not worried about finding other places to put these waste materials (in some ways I’m actually glad to finally have some scraps NOT being fed to the Mega! It’s a food hog! lol).

Anyway – I’m aiming to have the stand built within the next week or two. I’ll definitely post an update once I do.
Stay tuned!
😎

Worm Composting in a Compost Tumbler