Worm Composting in a Compost Tumbler 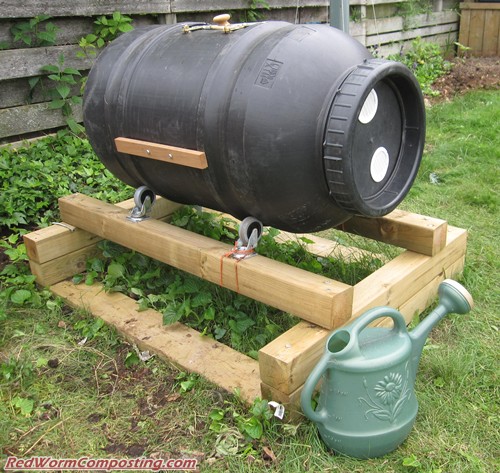 Over the years, I’ve stayed pretty consistent with my views on the “proper” use of compost tumblers – and what that has amounted to is a firm recommendation NOT to use them as an actual worm bin. Instead, I have suggested that people use them to make “worm food”.

Maybe I’m softening in my old age, I dunno…but at any rate, I have decided to turn my own tumbler into a worm bed this year and see how it pans out! Now, right off the bat let me point out some important details. For starters, I am located in northern temperate North America (in Southern Ontario). Our summers tend not to be really extreme in comparison to many other (more southerly) locations. Multiple days above 30 C (86 F) would be considered a “heat wave” – and it’s rare to get above 34 (~ 93 F). Also, my tumbler is located underneath a tree, so that will make a big difference in terms of preventing overheating.

If you happen to live in a zone where 95 F (and beyond) is just “par for the course” as a daily high during warmer months, it will definitely be a lot more difficult to keep worms alive in a tumbler (or any plastic bin sitting outside for that matter) – even if it is in the shade.

Setting up the bin didn’t involve much in the way of planning or strategy. There was already a fair amount of partially decomposed cardboard in there. I added some shredded pizza boxes, some old coffee grounds sludge (that had been sitting in a bucket outside), and transferred wormy material from my “pet waste vermicomposting” heap (very well processed material with lots of worms in it – hasn’t been added to for more than 6 months). I also added some water to moisten the cardboard (all of which was quite dry).

Moving forward, I’m sure I will “tweak” things in an effort to optimize the system a bit – but all in all, I’ll be keeping the project nice and simple (we know what happens when I try to over-complicate things! lol).

Stay tuned.
Should be fun to see what happens!
😎