[UPDATE: The video mentioned below is no longer online so I have removed the embed code for it.]

Firstly, I’d just like to send a BIG thanks out to ‘Jeff’ – one of our readers (and a customer) – for telling me about this today. This is exactly the sort of thing that reminds me of why I got into vermicomposting in the first place (like I need a reminder – haha!). I love coming across these super-cool ‘real world’ examples of worm composting being successfully used on a large scale.

This video talks about the Red Worm beds (which actually just look like a series of big Rubbermaid tubs) being used at the Wright-Patterson Air Force Base Recycling Center, in Dayton Ohio. The worms process fruit and vegetable waste (along with newspaper) from the base, and of course convert it into a pretty amazing all-natural ‘fertilizer’. One very interesting tidbit was the observation that the worms seem to feed most heavily at 70 F (academic research has suggested that the ‘optimal’ temperature is closer to 77 F).

Although this video is quite new, it looks as though the base has been using Red Wigglers to process their wastes for a number of years now. I tracked down an article over at Worm Digest posted in 2005, but which actually looks to be from 2003!

Here is an interesting blurb from that article:

The base launched a vermicomposting program in July, using earthworms to consume a daily average of 500 pounds of solid waste. The worms digest vegetable matter and old newspapers. That saves the base about $25 per day on transporting and disposing of waste.

As the number of worms grows, so does the amount of waste they consume.

The base acquired 250,000 worms and their climate-controlled home at no cost from another base that found it didn’t produce enough food waste to satisfy the little guys’ voracious appetites.

At Wright-Patterson, which produces more than enough fruit and vegetable waste from its commissary, the California red wigglers have flourished, now numbering more than 300,000.

[UPDATE: Unfortunately the Worm Digest website is no longer active so I can’t link to the original article]

Just the fact that they are doing this is great – but it is also quite inspiring to see that they are even saving quite a lot of money in the process!
😎

As I mentioned at the beginning of Mark’s recent guest post (Mark and his OSCR Worm Bin), I’ve been bugging him about writing for the site for awhile now. Ever since buying worms from me last winter he has been sending me emails about all his cool vermicomposting projects – not to mention sharing his helpful winter worm bin heating strategy, and posting lots of helpful comments on the blog. I just KNEW he’d be a great addition to the ‘team’, since one of my main goals here at RWC has been to get people excited about vermicomposting. If the overwhelming response to his OSCR post is any indication, it looks as though Mark is definitely going to be helping out in that department.

Anyway, I don’t want to waste too much space sharing MY thoughts about all this (will certainly add more in this week’s newsletter), so without further ado, here is a little more about Mark (written by the man himself)…

Let me tell you a little bit about Mark from Kansas. 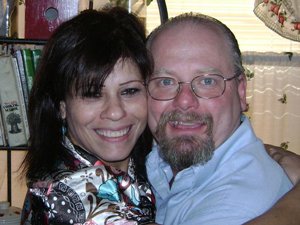 Mark and his lovely wife Letty

I live in well… Kansas. My wife and I are in the health care field. When we moved into a really nice house a few years ago, the yard was a mess. We even found what was left of a frozen turkey in a cooler in the back yard. The backyard was over run with weeds and the front wasn’t much better. We bought some plants and the yard started to look better. After I cleared the weeds and brush, I took it to the city compost place. There I discovered compost. I took all I could haul and top dressed the flower beds. I then started to research municipal compost and was not all that impressed but, it looked good.

I turned my attention to the lawn and that giant pool of water out back after it rained. I could not grow grass to save my life. It was like the dirt was damaged. One of my residents was telling me about the great dust bowl back in the 30’s. I started to read about the dust bowl and figured that’s what happened to my yard. It turned out to be a good guess. Earlier I mentioned how I wasn’t impressed with the municipal compost – the weed seeds germinated nicely and overtook the grass seed in a matter of two weeks.

So, not wanting to spend money on synthetic fertilizer, I did more research and found redwormcomposting.com and thought “this is the biggest bunch of crap I have ever read!”

The worms are going to eat my garbage, that’s a good one!

I think I read everything on the website for about 4 – 5 months before I bought my first pound of worms, mainly because I did not think it would work. I followed the instructions, I even challenged the idea of keeping it outside, it stayed warm like it was suppose to. I noticed that the worms were really doing what they do. We had some really cold weather coming in so I decided to add a heater (that can be viewed elsewhere in this website).

My wife came up with the heater idea. I decided to move the bin inside because I got tired of going out to the cold garage. A few weeks later I noticed that all the food was gone, the bin had an earthy smell to it, and there were these little lemon looking things all over.

I harvested and split the bin. The vermicompost (VC) was so rich looking and the funny thing was, it use to be our trash. Then I split again, bought some more worms, and got hooked.

We use the VC in our flower beds; one bed was mostly sand and the other was mostly gravel. Man did those plants grow. We also started a vegetable garden as well. The tomatoes did well and, through casual observation, they were bug free, disease free and were pretty tasty.

On a personal note, one of the residents I work with, has a dementia related illness with dementia related symptoms and short term memory loss. His wife Joann would come in every day so I got to know him through her. She told me he was an organic gardener and he would always tell her how his compost smelled. Joann did not know how important that little piece of information was. Her husband would open up to me when I would ask him about compost. He would come out of his room more if I asked him to and we became friends. We would talk about compost. Joann passed away a few months ago; I still miss her very much. She was almost motherly to me.

So here I am today. I am moving onto bigger projects. My winter project is the OSCR bin and to see how fast I can process a ton of trash.

I have smaller projects in the works and am planning a big project in the spring and summer.

I would also like to add that my wife Letty (pictured above) has been very supportive of me. She has had some ideas that I incorporated into my projects. When I was harvesting a bin last winter, I did it in the house it was too cold for me outside, she was really impressed with the VC. I was surprised that she didn’t say anything about the wheelbarrow in the back room of the house or the few worms crawling around on the carpet. Letty also brags about me at work, she is like my own personal cheerleader. One time I went to get 2 more plastic tubs for a side project, she wanted to pick them out (I suspect she choose a certain color in case I had to bring the bin inside and it would match the curtains).

Thanks Mark! Bentley here again, folks – and just so you know, I WON’T be butting in on all of Mark’s posts (apart from the odd teasing remark, perhaps). I will be adding a tiny blurb at the end of each of Mark’s articles along with his headshot, just so there isn’t any confusion over authorship. Mark will also have his own user account here, so his name will appear as the author (down below where it says “Written by Bentley” it will say “Written by Mark from Kansas”)