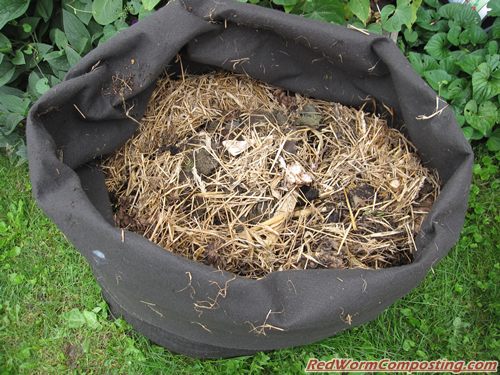 I figured some of you might be wondering how my Compost Sak vermicomposting system is doing these days, so I recently assessed the situation. As you may recall, I never really stocked it with a lot of worms – I basically just added some material that happened to contain some worms and cocoons when I first set it up (plus one small addition of worms on another occasion). This combined with with fact that I added a lot of waste material during warmer periods (causing the system to heat up quite a bit) left me unsure as to what I could expect to see in the way of a worm population.

Interestingly enough, the system is absolutely loaded with Red Worms now – and they are distributed throughout (rather than just down in the bottom). I think the onset of cooler weather and a bit more “neglect” has definitely helped a lot! 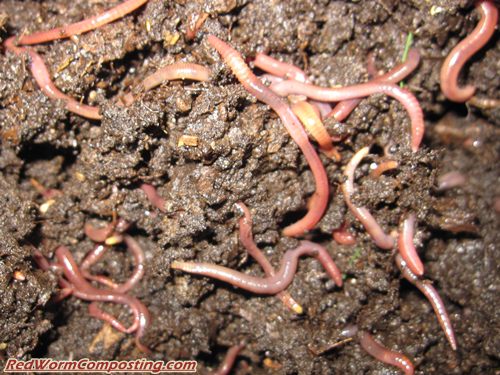 All in all, I am really impressed with how well the Compost Sak works as a vermicomposting system, and a composting system in general. Like I said, I added a LOT of wastes to it while it’s been up and running (and didn’t really do much to “optimize” these materials for faster break-down), yet most of it seems to have been converted into rich, dark compost already.

I don’t think Compost Saks would necessarily work well in every situation though – at least not for vermicomposting. In locations with very hot, dry summers, you may encounter issues with overheating and/or drying – but then again, if it’s kept in a well-shaded location and watered regularly, perhaps the excellent “breathability” would keep it cooler than various other types of commonly-used outdoor composting systems.

Bottom-line, it’s safe to say that I’m officially a fan of this simple (yet effective) composting container, and will certainly continue to use them! By the way, my other Compost Sak has worked very well as a tomato-growing bed – but I will more than likely switch over to “Smart Pots” next year since they are designed specifically for growing plants.
8) 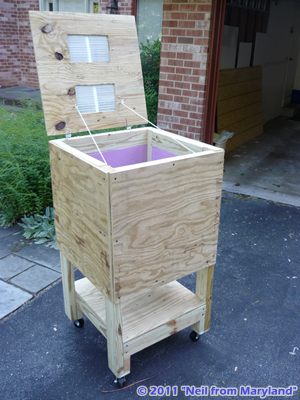 My recent “Complete Guide” pre-launch was an incredible reminder of the fact that the RWC community – and the vermicomposting world in general – is chock full of wonderfully kind, supportive people. Some individuals even seem determined to go well above and beyond the (already impressive) “norm” – a prime example being my new friend, Neil (“from Maryland”).

Neil, who you might consider to be a “new” reader of the RWC website, recently ordered the pre-launch package along with 5 lb of Red Worms. His intention was to access the VB24 plans right away and get the bin built before the worms arrived – a pretty ambitious goal in my mind, especially for someone who doesn’t consider himself to be a serious DIYer!

Well, the long and the short of it is that he DID get the bin built before the worms arrived, and while it took a bit longer than he had originally anticipated, it was a process he derived a great deal of satisfaction from. It also seems to have inspired him to do something “well above and beyond the (already impressive) ‘norm'” – that’s for sure!

I really appreciated Neil’s double order, and his willingness to keep me posted on his progress, but I certainly didn’t expect him to then proceed to put together a full photo-journal of his building experience and offer it as an additional resource for other VB24 plan owners – but that’s exactly what he did! He’s even taken it a step further by offering to periodically share his ongoing VB24 vermicomposting experience with us here on the blog!
😯
(Thanks again, Neil!!) 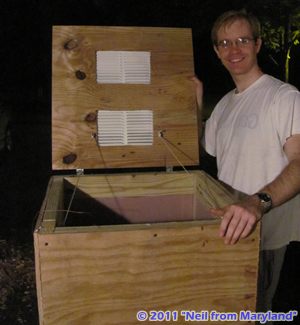 Joe (Denial) did a phenomenal job putting together the plans for the VB24, and all the positive feedback so far has certainly been a testament to this. What Neil’s done, though, is provide a very helpful play-by-play written from the perspective of the typical person attempting to tackle the project. I know for a fact that I myself will be reading through Neil’s guide multiple times before building my own VB24 this fall!

For those of you with an interest in the “VB Series” of flow-through bins – particularly those of you who may have missed the pre-launch – the good news is that the VB24 plans/guide will be launching (as a stand-alone product this time) later in the week. I should mention, though, that unfortunately the planned release date for the VB Series plan bundle – which includes two larger designs along with the VB24 – won’t be as soon as previously predicted. We’re hoping to make that one available sometime early in October. The good news is that all VB24 plan owners will be entitled to a very low-priced upgrade deal (no pressure of course – only if you have an interest in building one of the larger versions).

I am aiming to make Neil’s photo-journal available for download in the member’s area by the end of the week, and will certainly keep everyone posted about the VB24 launch (be sure to sign up for the VB Series list if you want to stay in the loop via email).
8)

How Long Can Worms Be Left Unattended?

We have returned from our extended travels after 2 1/2 Months to find our worm population at about 6…… I guess we will have to start over again with a new population????
FYI, we did feed about two weeks before our departure and added additional bedding but I suspect based on what we found on return inspection was the food supply was exhausted…..????

Hi Tom,
While I’d certainly be the first to recommend neglecting your worms a bit (typically better than too much attention), I can’t say I’m TOO surprised that most of them have disappeared after not feeding them for essentially 3 months. There are a lot of factors that can play a role here. The location of your system (indoors/outdoors), the average ambient temperatures while you were away, the age of the system (before you left), and how the system was set up could all have a major impact.

For example, worms in a newly set-up (enclosed, moisture-retaining) system containing LOTS of shredded cardboard bedding mixed with food, located indoors in a relatively cool spot would have a MUCH better chance of surviving than if the system was sitting in a really warm spot, with not enough bedding mixed in – especially if the system was already pretty mature by the time you stopped tending to it and/or it ended up drying out quite a bit.

I definitely wouldn’t give up on the material left in your bin by the way – perhaps there are lots of smaller worms and/or cocoons that you just didn’t see? Might be worth putting some new bedding/food mix on top to see if you end up with more (than 6) worms up in this zone. You might be surprised by the number of worms you end up finding there in a week or two (hard to say for sure, but probably worth a shot anyway).

Does Particle Size Make a Difference? 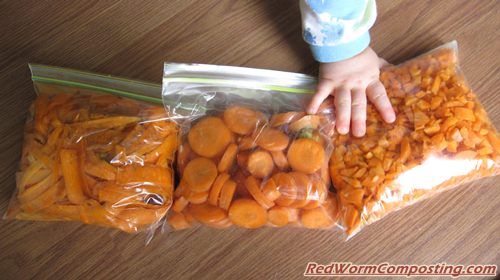 Something I’ve been meaning to test out for quite some time is whether or not food particle size has a major impact on the growth/reproduction of Red Worms, and just generally on the overall effectiveness of a vermicomposting system. I think it’s fairly safe to assume that foods that are chopped up finely will become “worm-friendly” (much?) more quickly than those that aren’t. After all, there is greatly increased surface area for microbial invasion, so these materials will tend to break down more quickly. But will this translate into much faster growth?

I need to dig up the source, but I recall coming across some research findings that seemed to suggest that smaller food particle size can have a dramatic impact on worm growth rates. I’ve certainly seen a big difference in the overall efficiency of systems receiving waste materials that have been chopped up etc – but I’ve never really done an actual comparison.

This is going to be a pretty simple experiment, but I’m hopeful it will end up being really interesting! As you can see, I am using carrots as the “food” material. I need consistency here, and don’t want to spend all my time trying to create equal mixes of different foods. Carrots are fairly inexpensive (and readily available), and I think they should provide the worms with enough nutrition when mixed with shredded cardboard bedding.

As you might imagine, I will be adding equal weights of carrots to each treatment when I set up the bins and each time I feed. Not 100% sure how many worms I’ll be adding to each, but my plan is to use immature worms that are similar in size (and of course, will add the same number to each bin). This way I know the worms weren’t already fertilized (carrying sperm) when added.

The carrots are in the freezer now. Will likely take them out today and aim to get the bins set up tomorrow. Next week I will add the worms!