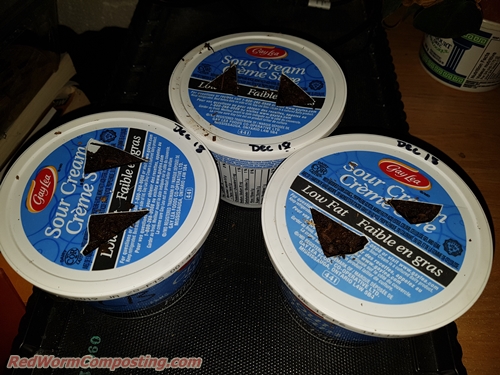 NOTE: This series was previously referred to as “(Red Worm) Cocoon Production in Different Materials”. As touched on in my last update, I decided to let the bins continue on, so now it’s more like my original “Four Worm Reproduction Experiment“.

I had planned to check on the bins a bit sooner than yesterday (Day 44), but in all honesty I do think it’s not a bad idea to limit the amount of disturbance as much as possible – especially now that there are tiny hatchlings involved.

As you may recall, my Day 21 update seemed to suggest that the cardboard and wood chip treatments were more productive since I found quite a few more cocoons in them than in the manure treatment.

Well, my most recent assessment served as an important reminder of the fact that cocoon-production alone does NOT equal population growth. The worms still need to hatch out, right?

Here are the numbers from yesterday:

Firstly, I should point out that those juvenile numbers are almost certainly lower than the actual numbers in the bins. Most of them are still at the “hatchling” stage, and even more difficult to spot than cocoons. Interestingly, the manure treatment seemed to be the one where they were hardest to find.

I didn’t want to be too invasive with my searching, since the hatchlings are very delicate. I would much rather under-count (more quickly) and have live worms, than spend hours on end picking everything apart and potentially killing some hatchlings in the process.

It’s safe to say that it will be very interesting to compare numbers once the young worms are bigger and more easily found!
😎

Whatever the future holds for these little Red Worm populations, this new twist is pretty intriguing – yet in some ways does make good sense. Aged horse manure is one of those “ultimate” habitat/food materials that Red Worms just seem to do amazingly well in. Undoubtedly, there are various chemical (etc) cues that help to dictate hatching rates. Perhaps the the wood chips and cardboard – since not as rich – trigger a longer term incubation period (in case of lean times ahead), while the manure suggests “good times”, leading more cocoons to hatch out.

I currently have a huge abundance of cocoons from some other trials I’ve been running (you can learn more about this in my new “Spare Room (Spare Time) Worm Farm report – part of the recently launched “Worm Business Starter Pack“), and I’m starting to test hatching rates now as well. Will be sure to set up some basic manure treatments to see how they compare to the bedding/food mix I’m currently testing.

As for the 4-worm trials…

I added a small amount of food and moistened the contents of the tubs before putting them back. I will likely check on them in another 3-4 weeks.