I’m sure everyone will be utterly shocked to learn that I really haven’t done much with this project since my last update (yep, that’d be sarcasm! lol). Anywho…the key is that I made some progress today!

I started, yesterday, by removing a couple of bags of food scraps from my chest freezer and letting them thaw overnight in a plastic tray. 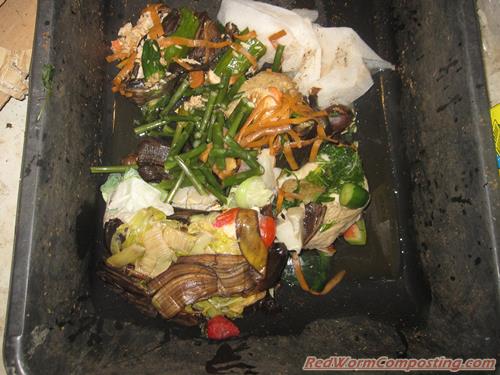 Today I chopped up the scraps fairly well, and mixed in some wood pellets (along with some of the sawdust mix I’ve been using for kitty litter) so as to sop up all the liquid. As has been my habit lately, I also mixed in some rock dust for good measure. I then made sure to mix everything up really well. 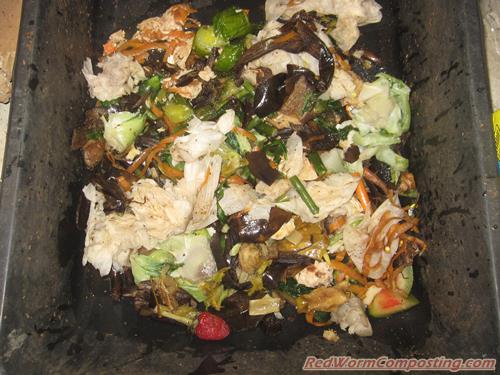 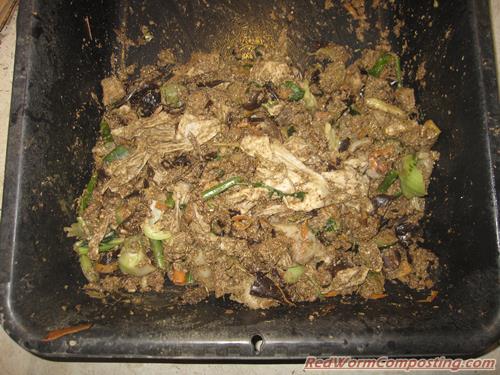 Next, I filled an old coffee can with the stuff and weighed it out on my balance (with can tared of course) before adding it to the plastic bin. This process was repeated for the Worm Inn. It’s important to note that the Worm Inn portion ended up weighing a fair bit more. I’m not concerned about this, though. I figure as long as we know how much has been going in to each we will be fine (and better to err on the side of more wastes with the Worm Inn than the plastic bin, in my humble opinion).

Here are the weights of material that went in:

It’s important to mention that this was more like a “homemade manure” (i.e. with bedding mixed in), and of course there is plenty of water-weight in there, so the numbers are a wee bit misleading. 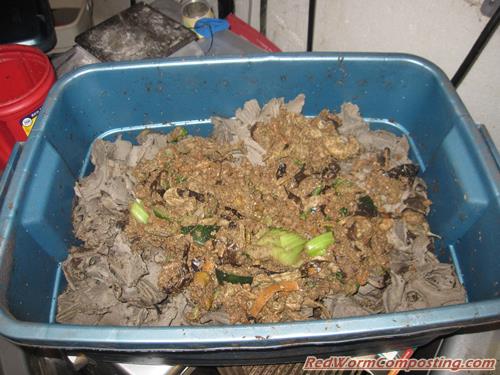 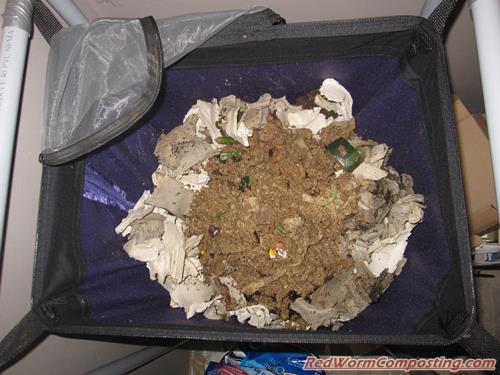 Before adding the scrap mix I dug around in each of the systems. It looked as though quite a lot of the material (in both) has been well processed. I also saw lots of juvenile worms in both systems. It seemed like there were more in the plastic bin, but it’s more difficult to dig around in the Worm Inn, so I won’t jump to any conclusions just yet.

The Euros seem to be doing just fine in both bins. I didn’t see any obvious Euro cocoons, but then again I wasn’t really looking all that hard. I will aim to do more of a population assessment (for both species) some time later on.

Not too surprisingly, conditions in the Inn were a fair bit drier than in the plastic bin. The problem, of course, is that I’m not using it properly. I should be adding water-rich food scraps on a much more regular basis. This will help to create the “sweet spot” – the moistened zone in the middle where worms thrive and “magic” happens (lol)! That said, the system is still doing surprisingly well!

I will likely have more time to tend to these bins over the next couple of months, so we may finally get this challenge going properly! I am planning to start by adding another similar batch of material to the systems early next week.

Will be interesting to seeing how things progress in coming weeks!
Stay tuned.