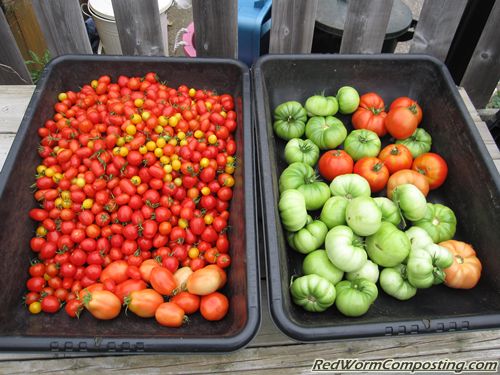 This year I haven’t been nearly as active with my harvesting (and freezing) efforts as I was last year. I’ve certainly picked a fair number of beans and tomatoes (and the odd zucchini), but mostly just for a given meal here and there. As a result, many of my beans have toughened up and/or been munched by critters, making them fit for worm consumption only. I thought I might be heading in the same direction with the majority of my tomatoes, but ended up taking some action this weekend.

I’m sure that a lot of my inaction on the harvesting (specially, harvesting then freezing) front stems from the fact that I ended up quite disappointed with the produce I froze last year. As some of you may recall, I ran into some serious issues with a tomato disease last year and ended up having to harvest most of them while they were still green (see “The Great Green Tomato Rescue“). I’m a serious fried green tomato fan, don’t get me wrong, but I had FAR more tomatoes than could be put to use in a reasonable amount of time. I figured that frozen green tomatoes could be put to good use in soups, stir fries, sauces etc. As it turns out, they just were not appealing at all – so, the vast majority of them ended of as worm food (as did most of the frozen zucchini, chard and beans).

As you can see in the picture above, I have been forced to harvest a fair number of beefsteak tomatoes while they are still green (since these plants are among the hardest hit by the disease this year) – but I also had LOADS of beautiful, ripe grape, cherry and tomatoberry fruit (and expect to harvest many more before I need to chop the plants down). I am much more confident that these can be used for soups, sauces etc during the fall and winter – they should offer much more flavor – not to mention lycopene!
8)

I have been particularly impressed with the tomatoberries this year. Sure, they didn’t go gangbusters in the bucket systems (although I still managed to harvest a fair number of ripe fruit from them) – but it was another story altogether with the plants that border (or are growing directly in) my worm composting trench beds! Even with my failed support efforts, and some really lousy weather (and lack of care from me) as of late, the plants have done great! Although you might generally think of these as a type of cherry tomato, I’ve found them much more versatile than that – and as you can see, some of them have certainly grown a fair bit bigger than most cherry tomatoes as well. 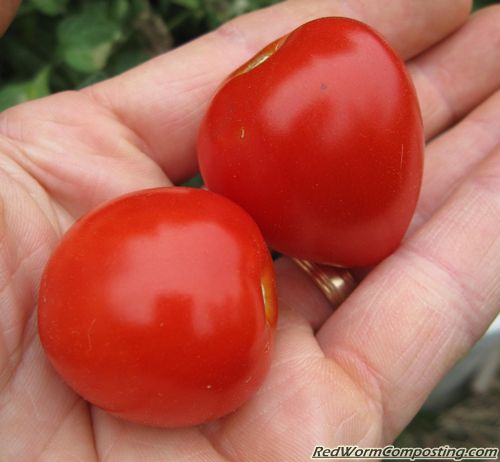 The flavor is definitely sweet enough to enjoy them right off the vine, yet meaty enough to also make them a great addition to a sandwich. I’m optimistic that they will do just fine as a mini “plum tomato” (for sauces etc) as well.

I spent a LONG time preparing my tomatoes for freezing last year – which naturally seems like “wasted time” in hindsight – SO, this year it’s going to be a K.I.S.S. approach all the way. I tossed them in the sink for a soak (to wash off dust/debris etc), rinsed them quickly, patted them off in some tea towels (to avoid excess water in the freezer bags) then bagged them up. 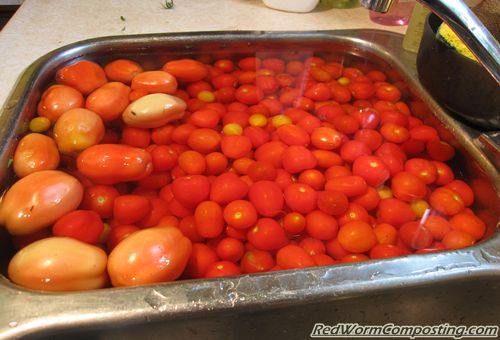 When all was said and done, I ended up with four large freezer bags full (perhaps ~ 20 lb worth) with a small quantity in a fifth bag as well. 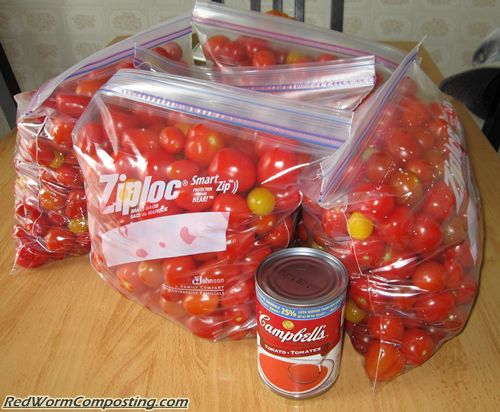 I didn’t do anything with the larger tomatoes. The plum tomatoes I picked are pink so I’m sure they will ripen fairly quickly, as will some of the pinkish beefsteak tomatoes. Any of the green tomatoes that don’t end up ripening on their own, or consumed / given away, will likely head right back to where they came from. I’m not the only one who enjoys munching on tomatoes (although I do prefer mine not to be rotten)!
8)