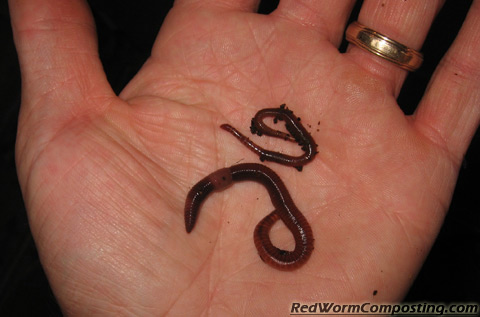 A manure Red Worm as compared to one of my normal Reds, raised on food scraps and cardboard

Back in April I wrote about the ‘wild’ Red Wigglers I got from the manure pile sitting at a friend’s horse stable. Looking back, and remembering the size of those worms (comparable to the ones in my own systems), I’d have to say they must have been quite young.

I had the opportunity to visit my friend’s horse stable this past weekend, and of course I headed straight for the manure pile as soon as I arrived. With a little bit of digging I quickly found a lot of seriously jumbo Red Worms – and they certainly lived up to their ‘wiggler’ name too!

Needless to say, I was pretty excited, and I made sure to take a bunch of the material (with worms) home with me.

These Reds are actually fairly close in size to some of the Euros I have, although certainly not as fat. It’s funny – I’ve recently been amazed by the size of the Red Worms in my food waste trenches out in the garden. They have been among the biggest worms I’ve personally grown – yet they are still not as big as these manure worms (we’ll see how big they are by the end of the season though – likely still some growth left in them).

I suspect that based on their size and their vigorous wiggling action, these Reds (an my trench worms for that matter) would be excellent bait worms or live food for larger fish, reptiles, birds etc. 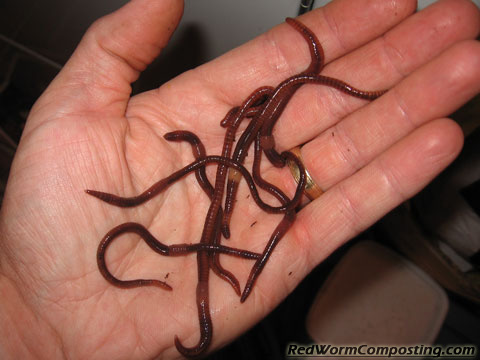 These Red Worms are long, but not as fat as European or Canadian Nightcrawlers.

Finding these big worms the other day certainly served as a reminder of the fact that manure is pretty well the ultimate food for Red Wigglers (and likely other composting worms as well). As I’ve mentioned before, my very first experience with Red Worms (at the ripe old age of 14) involved finding unbelievable quantities of them in a huge pile of old manure out behind a horse barn.

If anyone reading this happens to have horses or other livestock (or can get a hold of large amounts of manure) I would highly recommend creating your own aged manure vermicomposting heap. If the manure isn’t already mixed with straw or some other type of bedding I would highly recommend that you mix some in. It will help to aerate the heap and will shift the Carbon/Nitrogen ratio more in favour of the worms. If the pile is big enough, you likely won’t even need to worry about cooler winter temperatures since it will stay above freezing (maybe even a lot warmer) in the middle of the pile. Once the manure no longer has a strong manure smell it will probably be ok to add the worms. Just to be safe, you may want to add a fair amount of neutral bedding material – such as moistened straw, newspaper etc, or even the entire contents of a worm bin – on the surface of the heap to provide the worms with a safe zone if the manure still isn’t quite ready to inhabit.

What’s interesting is that another friend of mine (who I actually buy worms from sometimes) has loads of Red Worms in his manure piles yet they are quite small in comparison to the ones I found, and seem to also look a fair bit different – this would be totally normal if they came from different habitats, but is a little puzzling given the fact that they live in a very similar material. This has me even more convinced that either there are in fact subspecies of Eisenia fetida, or one of the two are Eisenia andrei (a very close relative). I guess we’ll see how they both look as they grow in my systems – if they end up looking exactly the same over time then my theory will likely get tossed out the window.

Given the great nutritional value of manure and the nice uniform consistency (in comparison to food waste) – not to mention the lack of issues with fungus gnats and fruit flies – I think I’m going to start feeding my worms more of this material. I think manure and cardboard combined would provide the ultimate in breeding a growth potential.