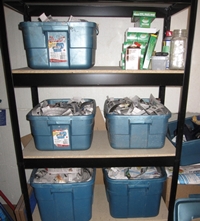 Naturally, if you can raise more worms in less space that’s even better!

Back in the “olden days” of the internet (and modern vermicomposting for that matter) a man by the name of Brian Paley wrote an article called “How To Breed, Raise, and Maintain A 100-Pound Stock of Worms in a Single Room“.

OK, I’m kidding around – but this thing is a meandering beast!

Here is the first paragraph for your reading pleasure:

The most difficult problem encountered in explaining this concept to potential “breeders” is the amount of outside information which is required to make everything clear. With this in mind, I will begin by listing several facts regarding worms in general, and vermiculture in particular. Though some of these points may be obvious, and others may not, they are all important in understanding the various principles that are at work here. By making sure everyone understands these things up front, we can hopefully avoid any confusion later. (I have developed some of these points as a result of my personal research into this area, and if they should appear to contradict anything which you have read or learned earlier, all I can say is that you should try and set up an experiment or whatever to test these claims for yourself,… before you call me up and question the wisdom of my mother’s favorite son.)

Now, imagine if you had to read almost 100 X more of that same sort of text to get to the end.
😆

Back when I first got into vermicomposting – nearly 20 years ago as I type this – I stumbled across “The Burrow” website, where the article is found, and was immediately drawn in by the title (how could you not be?). But it didn’t take long before I ended up bogged down in Paley’s infuriatingly-long-winded prose (and I know a thing or two about long wind!) leading me to eventually give up on it.

I’m glad I did…because I wasn’t quite “ready” yet.

Fast forward to summer of 2015, and for some reason the article lured me back in. This time I decided to was going to slay the “beast” – reading it from start to finish.

Hidden among all those needlessly-detailed explanations, corny jokes, and paragraphs of downright bogus information…I found pure gold! Fascinating insights about Red Worms that totally jived with things I’d learned and experienced over the years (yet had never really bothered to analyze all that much).

I decided to carefully go through everything with a fine-toothed comb and create my own set of notes as I went. What eventually emerged was the original “Paley100” guide – my “Coles Notes” (“Cliff Notes”) summary of this epic resource.

This guide was originally only shared with members of the Worm Farming Alliance, but this year I decided it was time to make it available to a much wider audience. So, I dusted it off, updated it (a little), and have included it with my free “Worm Business Starter Pack“.

As the title promises, Paley claimed it was possible to raise 100 lb of Red Worms (in fact, far more than this) in a single room of a house. But there’s an important “catch” – it’s actually the equivalent of 100 lb (or more) of Red Worms he is referring to.

What exactly does that mean?

The Big Idea at the heart of the article is that there are various ways to grow huge numbers of tiny adult Red Worms – and maintain them at far greater densities than normal sized worms. According to Paley, these worms can then be fattened up to normal size quite quickly (he claims within 2 weeks). Apart from requiring far less space, these populations of tiny worms also don’t need nearly as much food or attention as would be the case with a professional worm breeding operation. In other words, this approach should be well-suited even for those with less experience.

In my mind there are 3 KEY areas of importance to zone in on – things that would need to be “proven” in order for Paley’s overall concept to hold water.

1) Huge populations of very tiny worms.
2) Tiny adults that continue to reproduce even at incredibly high densities.
3) Fattening up tiny worms to “normal size” within a couple of weeks.

Over the years I’ve had plenty of systems that have ended up neglected, usually leaving me with loads of much smaller worms (if the system was well-fed prior to the neglect, and also contained lots of bedding). So, I feel quite confident that #1 is possible.

In the past 6 months, I’ve had the opportunity to “rescue” neglected systems (including my “Insurance Bin“) containing tiny worms – and I’ve been very impressed by just how quickly the worms grew back to “normal size” (and even to “big” range). Maybe not quite as quickly as Paley claims, but close enough for #3 to be viable as far as I’m concerned (within 3 to 4 weeks for sure).

It’s #2 that’s now the only one I’m not so sure about. Is it possible to end up with a massive population of tiny worms that will continue to replenish itself as worms are removed? I’m not sure – but I would definitely like to find out!

I think the best chance at success with a Paley-esque approach will involve a bedding-loaded system that is well-fed for quite a while before being neglected or at least switched to bedding-only feeding strategy.

Last year (2018) I “accidentally” ended up with massive quantities of tiny worms in my Urban Worm Bag (1.0) system. It had been fed heavily with kitchen scraps, then aged horse manure for a number of months before being completely neglected. It wasn’t until I noticed loads and loads of tiny worms in the tray that was sitting underneath it (and plenty more dried up on my floor as well) that I started to clue in.

The bag eventually ended up outside where it got rained on. When I finally decided to clean it out properly I discovered gobs of small (but now hydrated) worms inside! 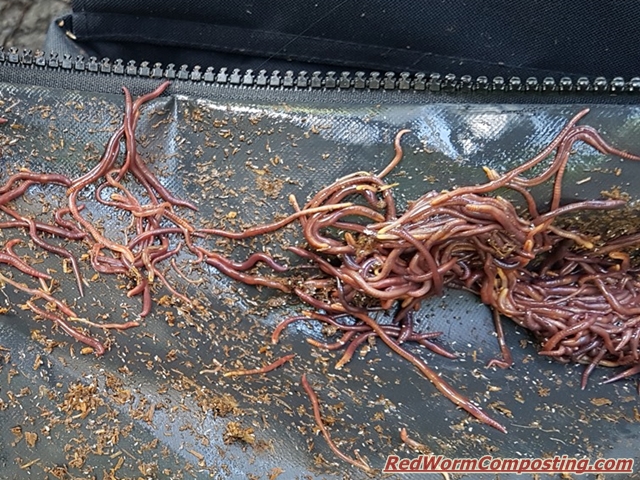 I think the UWB offers the ultimate testing ground for a Paley approach – and, as touched on in my last UWB 2.0 update, I want to start heading in that direction with my current system. I’ve already been adding a lot of bedding materials – literally and figuratively in fact, since I am experimenting with ripped up bed sheets as a bedding material! I’ve been adding more food as well – and plan to ramp up feeding even more in the weeks ahead.

I’m not really sure when the “neglect” period will start – or whether it will be intentional or not (haha) – but I’m predicting that it will be at least a month or two away.

If any of you are interested to learn more about Paley’s methods be sure to sign up for the Worm Business Starter pack and check out the Paley100 guide.