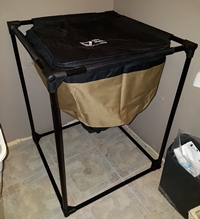 Sometimes I think it is very important to see a project/experiment all the way through to completion. Other times…not so much!

Some time ago I reached the conclusion that my cat waste vermicomposting project fell into the latter category.

I’m the sort of guy that really loves to “play” with my active systems (when I’m not busy “neglecting” them, that is – haha) and – quite frankly – playing around with a system containing plenty of “kitty poopies” isn’t really all that much fun.

I see plenty of value in using Red Worms to process pet wastes – even with an indoor system like an Urban Worm Bag (if set up and managed properly) – but it makes a lot more sense for these systems to mostly be left alone.

As far as the worms are concerned, while they do seem more than happy to process cat wastes over time – they certainly aren’t received with any of the same “enthusiasm” you see when something like horse manure or pumpkin is added.

So where do we go from here?

For the most part, my immediate plans are simply to continue treating the UWB like a pretty typical system. I do have some other ideas up my sleeve, though – including testing some old sheets as a bedding material, and eventually only adding bedding to see if I can produce similar results as Brian Paley (be sure to check out the free Worm Business Starter pack if the name doesn’t ring a bell).

Whatever the case may be, I will certainly keep everyone posted!
😎