Today I decided it was time to do a thorough examination of my “Euros vs Reds Head to Head Challenge” bins. As you may recall, I managed to get the experiment back up and running (after replacing most of the Euros I killed early on) towards the end of January. On Feb 9th I discovered that all six Red Worms had indeed survived (I could only find three the last time I had checked), and by Feb 21st it was looking like the Reds were possibly starting to get ahead of the Euros when I found two Red Worm cocoons and only one Euro cocoon.

Well, let’s just say I was in for a pretty BIG surprise when I went through the bins today!
😯

I started with the Red Worm bin, carefully removing all of the bedding looking for cocoons, juveniles and adult Red Worms. I took my time so as to ensure that my counts were as accurate as possible.

I ended up finding 18 Red Worm cocoons – this seemed pretty impressive considering how few worms are in the bin, and the fact that I could only find two cocoon the last time I checked (a couple of weeks ago)! I didn’t find any juveniles, and strangely, only found four adults (was expecting to find six). I think I will be doing a quick double check on that fairly soon just to make sure I didn’t forget to add one or two to my tally etc.

As you might imagine (based on my mention of a “BIG surprise”), it was in the Euro bin that things really got interesting! I naturally assumed it was going to be a lot easier to track down cocoons in this bin. For one thing, I figured there would be fewer of them. I also assumed that given the larger size, they would be a lot easier to spot. I was wrong in both cases!

Total Euro cocoons found: 33 (nearly twice as many as the Red Worms) 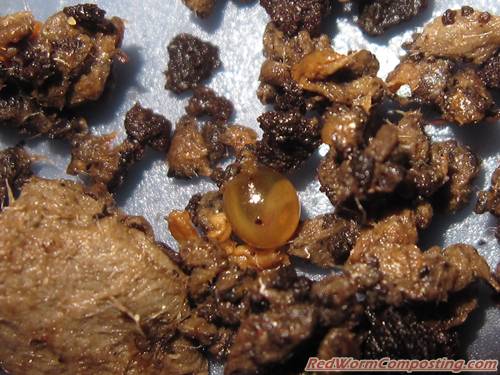 I have little doubt that I ended up missing some as well. I kept finding them in material I thought I had carefully sorted through. What made things challenging in this bin is that the cocoons were ending up well-hidden in among the worm casts, which were more abundant and larger than in the Red Worm bin.

All six adult Euros were easily found, as were two juveniles (second image below). I’m not too surprised to have found these young worms given the fact that I added two cocoons to the Euro bin when I started it up again (thus giving the Euros a head-start in terms of producing offspring). 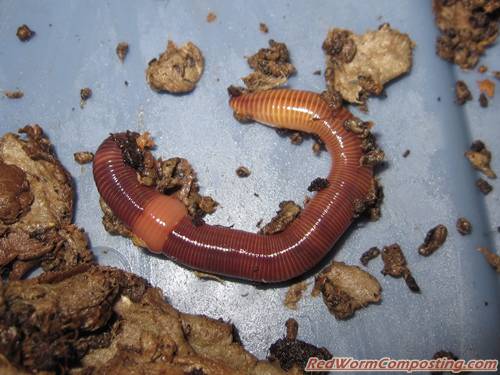 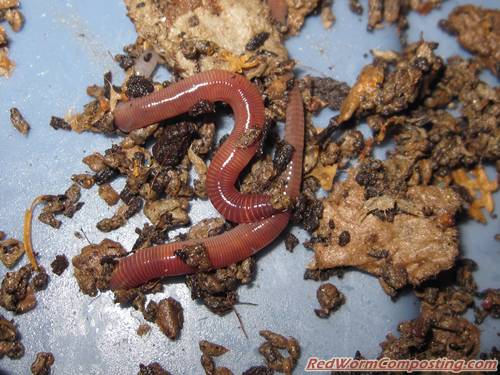 In both bins, apart from worms, I found lots of tiny fast-moving larvae. Based on the fact that they had legs I knew they must be some sort of beetle larvae – very likely Rove Beetle larvae. 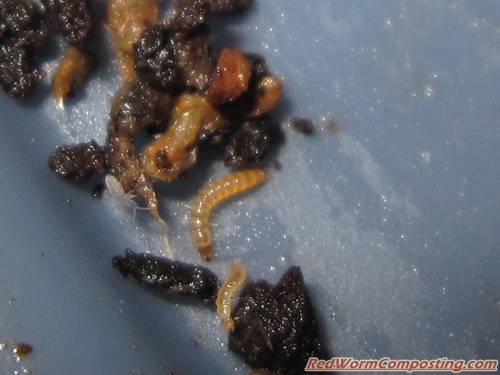 Sure enough, I ended up finding quite a few of the (even-faster-moving) adults. I’m still surprised that I was able to capture one on film! lol
Close up they do almost look like ants, don’t they? But they are actually very small – and exhibit the characteristic Rove Beetle upright tail when moving around. 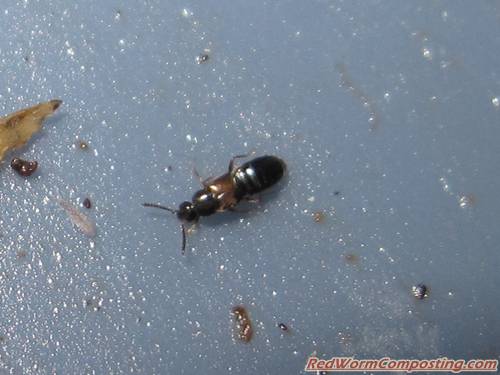 Anyway – I’m REALLY interested to see how things progress from here. I thought for sure that the “advantages” I was giving the Euros initially were going to disappear very quickly, with the Red Worms growing in number much more rapidly. Now I’m not so sure! I guess we’ll have to wait and see what happens.
8)

Where Did My Worms Go?