It’s been a few weeks since my last VermBin48 update. Things have continued on in much the same manner. I top up with lots of bedding, the level of material goes down (fairly quickly) and I add more bedding!
🙂

As many of you know by now I’m dealing with a bit of a scuttle fly situation in the bin, so I still haven’t been adding any real “food” materials. What I have added, though, is 20 lb of fall leaves (basically a big animal feed bag full) plus, as mentioned in another recent posts, the contents of my WF-360 Euro system.

I saw a fair bit of heating shortly after all those leaves were added (oh, did I mention I added them all at once?? lol), but temps have really been settling down nicely over the past week or two. 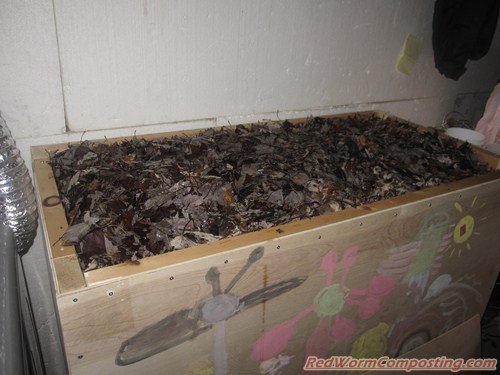 Not sure if I mentioned this, but my parasitic nematodes (Steinernema sp.) arrived a little while back. I have already applied them twice. This basically involved mixing part of the culture in a bucket of aged tap water and then slowly (and thoroughly) watering the contents of the bin with it.

One thing I noticed when I was experimenting with parasitic nematodes and fruit flies is that the presence of the nematodes seemed to result in more fruit fly adults emerging. My hunch was that this was some sort of natural pathogen-response mechanism intended to help ensure the creation of future generations.

It seems like there is a similar occurrence with the scuttle flies. Both times I have added the nematode liquid, the number of adults emerging has seemed to be higher than normal. I have no idea if the nematodes are really having any sort of impact on the larvae down below, but I figure they must be helping at least a little bit.

Something else I have been experimenting with are various types of traps. I discovered early on that cider vinegar traps aren’t nearly as effective for scuttle flies as they are for fruit flies – so I’ve been trying other liquids. One weekend evening I just happened to be down near the bin with a beer (some people go to social functions…I vermicompost! lol) and I noticed that my glass seemed to really be attracting the flies. So, I decided to pour some beer in an old dried up cider vinegar trap to see what would happen (a “beer crime”, I know, but it was in the name of “science”! lol). 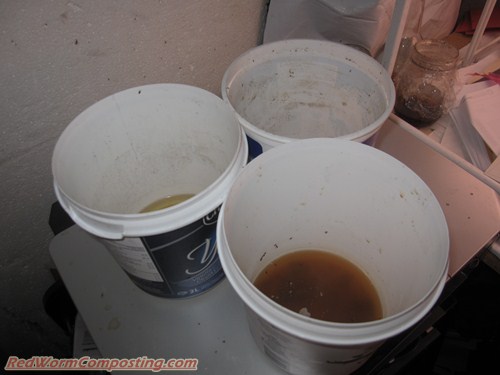 I also purchased some baker’s yeast and created similar traps with apple juice and the yeast. I thought perhaps that the flies would be more attracted to fermenting apple juice than to the vinegar. So far the beer trap has been outperforming the other two by a substantial margin.

One other idea I’ve had (and am starting to implement) is to put food wastes (including some stuff with the potential to really stink) in two liter pop bottles, and then to drill small holes for the flies to squeeze through. I figure lots of the flies will move into the bottles, but not all that many will be able to escape again – and if I freeze the bottles periodically in my chest freezer, I’ll take care of any flies and larvae that happen to be in there, leaving the traps ready for more fly-attraction action.

So far, I haven’t found scuttle flies to be nearly as annoying as fruit flies since they don’t have the same tendency to fly around in clouds. As written previously, they actually run around a lot – so that also makes them an easier target for my rolled up newspaper! lol

At some point I am hoping to add a batch of really well aged horse manure. Apart from adding some obvious food value (likely appreciated by the worms after all their bedding-munching), I think it will also help to introduce some predator organisms that can help me keep these flies under control. While fairly fresh manure can be teaming with maggots and buzzing with adult flies and gnats of various kinds, you just don’t see the same thing with older material. What I HAVE found in this material are high numbers of rove beetles and their larvae (also predatory), along with a wide assortment of other creatures. I can’t recall ever having an aged-manure-dominated system overrun by either fruit flies or fungus gnats.

Generally speaking, these sorts of organisms (such as scuttle flies) tend to come and go in cycles anyway – so I wouldn’t be surprised if the population growth just gradually tapers off, and then declines on its own (and with the help of various critters that are already taking advantage of the abundant food source – such as my resident spider population).

As for the worms – they seem to be doing really well in their new home, and the fact that the level of material in the bin continues to drop fairly quickly seems to indicate that they are busy at work down below!
8)

And the Vermi-Humor Winner is…