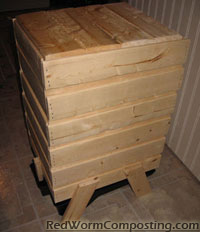 As some of you may recall, about a year ago I started up my “Four Worm Reproduction Experiment“. Although I didn’t spend enough time tending to the system (surprise, surprise – haha), the results were quite interesting. Over the course of 5 months or so, the worm population underwent a 25+ fold expansion (I counted 106 worms, but certainly would have missed some). Pretty impressive – although the vast majority of worms were still very young.

Anyway, I haven’t written all that much about the wooden stacking bin I used for the experiment, so I thought it might not be a bad idea to update everyone about that system. Once the experiment was officially over, I continued to add food and water to the bin in an effort to use it the way it was intended (ie. by actually adding additional trays etc). Initially, I was a little frustrated with the system’s tendency to dry out really quickly, as well as the trouble I had trying to keep it free of fungus gnats and/or fruit flies. Thankfully, adding the parasitic nematodes did seem to help.

Once I had secured a large supply of the aged horse manure (with bedding) – which has been all the talk of the blog for the last few months it seems (haha) – I found myself enjoying the stacking system much more. The aged manure was an excellent bedding/food and it also contained lots of baby worms and cocoons. I noticed activity in the bin increasing by leaps and bounds. I found the material to be great for burying food waste as well, and no longer had serious issues with gnats or fruit flies. In no time at all I was up to the final (5th) tray and ready to evaluate the end result. 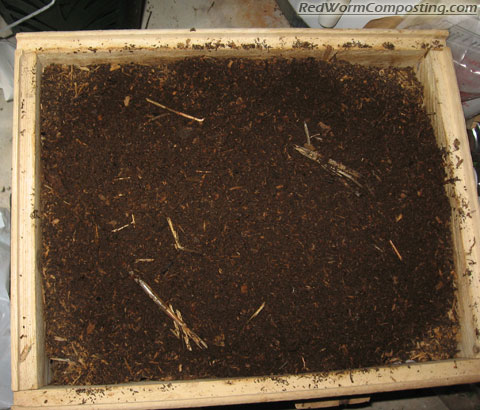 The material left behind in the lower trays looked quite good (with a fair amount of resistant debris understandably still intact). Interestingly enough, the best material wasn’t in the lowermost tray, which had totally dried out and still had lots of organic matter not yet decomposed. The second and third trays on the other hand both had a nice dark, uniform looking material – undoubtedly, at least partially due to the fact that my bedding (aged manure) was already pretty uniform stuff.

As expected, most of the worms were up in the top two trays where there was more moisture and better food resources. I harvested most of the larger bodied worms (ie not the infants – haha) and ended up with about 3/4 lb of fairly small Red Wigglers. At one time or another there had actually been some Blue Worms (Perionyx excavatus – more on them in an upcoming post) in the system, but I wasn’t able to find any.

All in all, I’d say that the system worked quite well. On the positive side, it was very easy to use and provided excellent aeration, thus aiding the production of high quality vermicompost. Again, the main negatives included the need to keep it moist and the tendency of the trays to easily become infested with pest flies.

The system now sits empty. I’m sure I’ll come with some sort of fun way to put it to use in the near future though (suggestions welcome). And as per usual, I’ll keep all of you posted!
8)