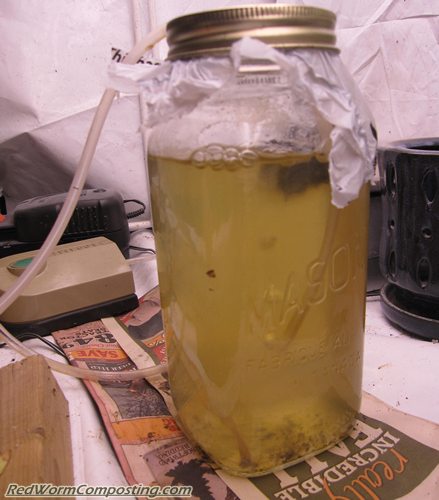 I recently wrote about the little “Worm IV” rig I have hanging over my Worm Inn. What started as a nifty way to keep my Worm Inn hydrated, has turned into a fun little experiment to test out liquid feeding methods.

Let me point out right off the bat that this isn’t really particularly relevant for those of you who are using plastic enclosed worm bins, or even for the average hobbyist vermicomposter in general – this is just me having some hair-brained fun! I have a background in (and keen interest in) aquatic biology so I love finding ways to tie the two together (hence my fascination with topics like “vermiponics“).

I DO, however, think this (drip feeding stuff) might offer some potential for those who are interested in breeding lots of composting worms without the need for using food waste, manures or commercial feeds. The big question I have is whether or not paper-based bedding materials drenched in a nutrient-rich broth will support worm growth and reproduction to the same extent that some of the more typical “foods” do. Some of you may recall that this is something I’ve briefly explored before (see “Making Microbes” and “Making Microbes – Part II“) – but I don’t think I ever ended up really testing it out all that seriously.

As mentioned in the last Worm IV post, I decided to start using water from my daughter’s fish tank in my drip system. I figured there would be plenty of nitrogen (and likely lots of microbes as well) that could help the carbon-rich bedding materials to break down more quickly – thus offering the worms a more-readily-available food source.

Since then, I’ve taken things a step further and have actually started brewing up my own “microbial soup” in much the same manner as one would brew a compost tea. I put a small clump of dry alpaca manure in a mason jar filled with fish water, then added a small amount of molasses. I am oxygenating the mixture with a small aquarium air pump.

I started the brewing process yesterday morning and checked on the mixture throughout the day, but the only change I noticed was the slight “tea” tinge the water had taken on. The water was still very clear when I took a peek yesterday evening. By this morning, however, the water had become quite cloudy – so I’m confident that the microbial population has increased substantially. I took a whiff just to make sure it wasn’t going anaerobic and couldn’t detect any bad smells, so I think it should be completely safe to use (as I discovered the last time around, adding a stinky brew to a worm bed isn’t necessarily the best idea!).

Moisture Content and Stocking Densities – Impact on Growth and Maturation