I should mention right off the bat that, although I’ve used today’s date, this is technically an update for Friday, August 10 – Day 36 of our Plastic Worm Bin Follow-Along (amazing how times flies!).

When I checked on the bin, I was happy to see how everything was coming along. It looked like the overall level of material was definitely lower than we left it (last update), the upper bedding seemed to be nicely moistened – and there was even some moisture on the underside of the lid. 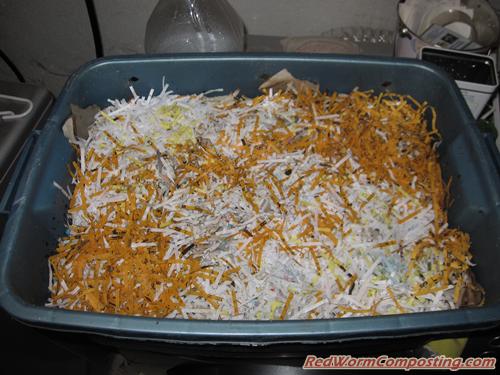 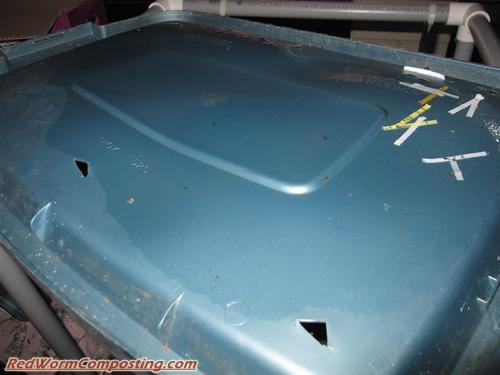 As I mentioned previously, frequently adding more dry bedding up top can help to keep the upper sides and underside of the lid quite dry – BUT, when it comes down to it, there is no need for concern if you are still seeing a fair bit of condensation. If there is so much liquid that you end up with lots of water drops falling when you open the lid, that’s probably a sign that you should add more dry bedding, but if it’s just a film of moisture I definitely wouldn’t worry about it.

I think it’s safe to say by this point that I’ve basically been “underfeeding” this system! I checked on things earlier in the week (last week, that is) and could find no sign of the watermelon I had added. This obviously isn’t something I need to worry about – in fact, it’s a good way to get the worms to process more of the bedding materials – but I’m thinking it’s probably time to ramp things up a bit!

Speaking of which – it looks as though I won’t need to worry about either fruit flies OR fungus gnats raining on my parade (when I add more food). I already mentioned that the fruit flies had disappeared, but it now looks like the gnats are completely gone as well! I’m starting to suspect that there must have been at least some viable nematodes in the various cultures I added to the bin – normally gnats are a bit more of a pain to get rid of. Whatever the case may be, I’m happy to see them gone!

For my feeding on Friday I decided to keep things pretty simple. I had some bags of zucchini slices in the freezer so I thawed some of them out, rather than trying to track down an actual mixed bag of food waste. The total weight of zucchini used was 1166 g (2.57 lb). This was chopped up and mixed with 204 g (0.45 lb) of dry, aged horse manure (my “living material” of choice). 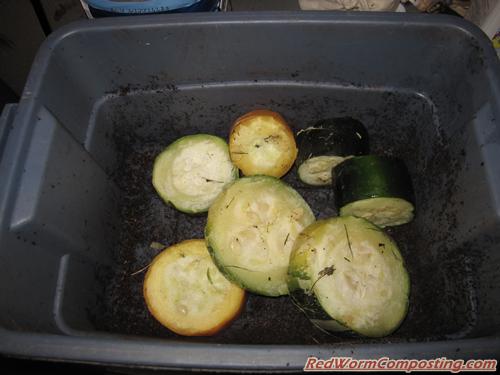 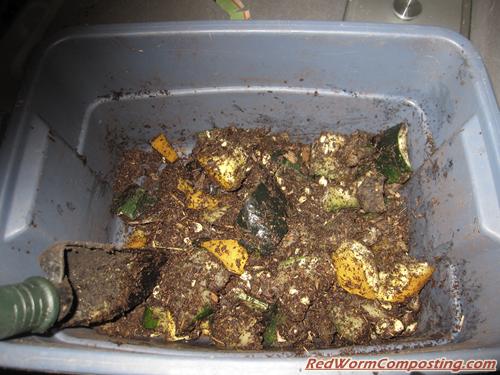 Adding the mix to the bin simply involved pulling back the old cloths (again, these came from the nematode cultures), creating a shallow depression, and dumping it in. I should mention, though, that I actually put some of my moistened upper bedding in the bottom of the depression before adding the food. This is one of the great things about keeping a layer of bedding up top – you’ll always have some to mix with your food wastes whenever you need it! 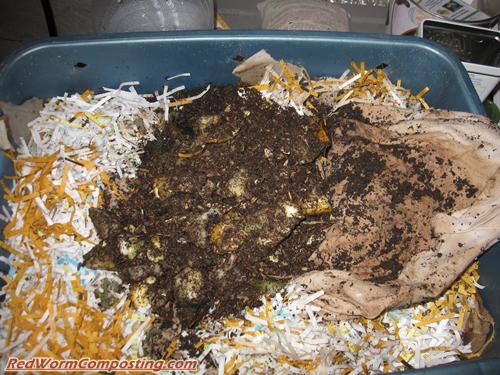 I then pulled the cloth back over top, along with the moistened bedding, before topping up the bin with a lot more dry bedding. 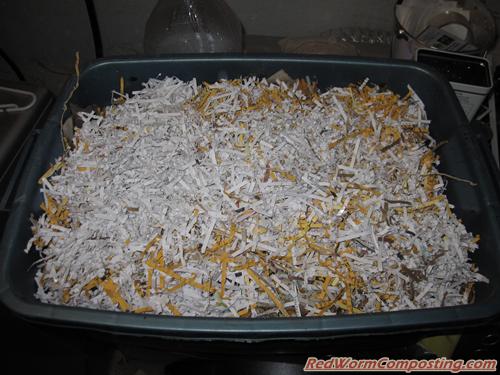 I checked on the feeding zone this morning and am happy to report that it’s absolutely crawling with healthy looking Red Worms (along with various other critters). It looks like a fair bit of the zucchini has been consumed already, so I’ll likely add some more food very soon.