This morning I finally got around to counting the worms in my “Euros vs Reds” bins, and I must say that the incredible difference in bedding-processing between these two bins (reported on in my 8-22-12 update – link below) is making a LOT more sense.

As mentioned previously, I decided NOT to count any cocoons this time around (I can only imagine how long that would have taken!) – I simply counted “adults” (those with an obvious clitelum) and “young worms” (those without an obvious clitellum). There was certainly some grey area there, though, with some of the larger “young” worms likely being capable of reproduction, but in terms of a total-worm-population size, there really just no comparison!

So yeah…150 worms vs 21 worms (not even taking into consideration the average size difference) – lol. This is exactly why I didn’t want to draw any major conclusions simply based on the appearance of the bedding in the two bins. The picture below says it all (that one little handful of Euros likely contained as many – if not more – worms than there were in the entire Red Worm Bin! lol) 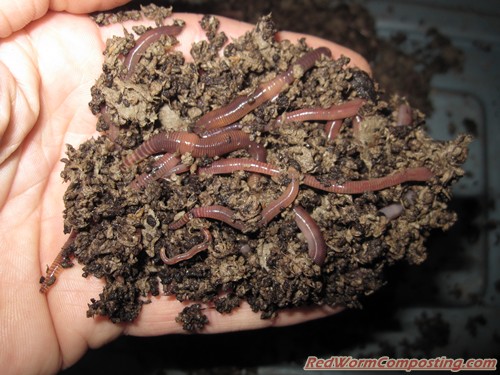 That being said…I still can’t help but think that Euros might be better adapted for thriving in systems where bedding materials are the primary food source (something I did feel bold enough to hint at in my last post). Sure, I gave them a decent advantage over the Reds right out of the starting gates – but that was MONTHS ago (at the end of January). It’s not so much that I’m shocked by the fact that the Euro population is larger than that of the Red Worms – I just can’t understand why we would still only have 21 Red Worms after 7+ months!

Looking back at my May update (where I reported finding 10 Red Worm adults, 8 juveniles, and 78 cocoons), it would appear that all the worms matured, yet only 3 more hatched out from those 78 cocoons! Compare those numbers to those of the Euros (8 adults, 71 juveniles, 104 cocoons back in May) and it’s clear that the Euros have been hatching out far more readily than the Red Worms.

In hindsight, I am glad I neglected these bins – since it resulted in these interesting findings – but I can’t help but wonder what might have happened had I added food a lot more often. One thing is for sure – I’m really looking forward to starting some new Euro experiments! Here are just a few questions I’d like to explore:

1) Pound for pound, will Euros process cardboard bedding (when primary food source) more quickly than Red Worms? Will they once again reproduce more quickly?
2) How much of a difference would it make if the bins were fed regularly?
3) What happens when an equal number of Euros and Red worms are forced to live in the same system? (something a lot of people email me about)
4) What happens when you keep Euros in a stacking bin? (another one people often inquire about)