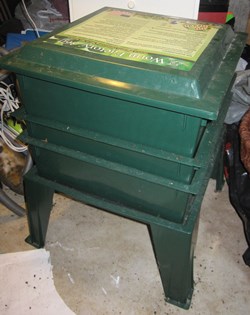 Continuing with my “updates” theme for this week, I figured it would only make sense to provide you with a “Stacking Bin Euros” update (NOTE: links for all previous posts below)!

This will actually be a “wrap-up” post, since I decided to dismantle the system. It has been up and running for 4 months, and – regardless of some neglect – I feel like I have a better sense for viability of using Euros in stacking bins.

The long and the short of it is that I think they can do better than I previously thought – they WILL absolutely move up the same way that Red Worms do – but their temperamental behavior can still come into play.

On at least 3 or 4 occasions I found one of them trying to squeeze out between trays (or already on the floor) – whereas there were no similar situations with Red Worms. Other than that, they seemed to adapt to life in the stacking system just fine.

As shown in my recent “Homemade Manure” post, the uppermost tray – while fairly well-processed – still has a fair amount of unprocessed material. Thanks to the recent addition of that HMM, there were plenty of worms up in this tray as well. 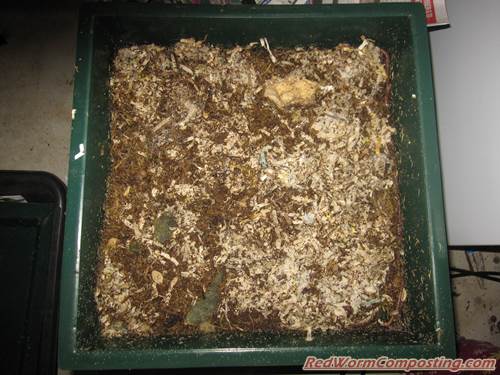 When I first uncovered the middle tray I thought I was looking at the bottom grate – it literally looked as though the tray was almost empty. I then realized that I was simply looking at the grate impression that had been embedded into the vermicompost in this tray (lol). Everything was definitely squished down, though – not exactly ideal worm habitat. Yet there still seemed to be a decent number of worms in this tray. 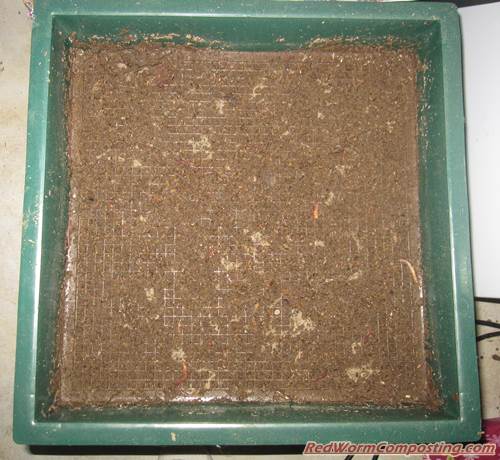 The bottom tray looked almost identical to the middle one, but the contents were (not surprisingly) squished down even more. Once again, there were worms (Reds and Euros) somehow living in this tray as well. 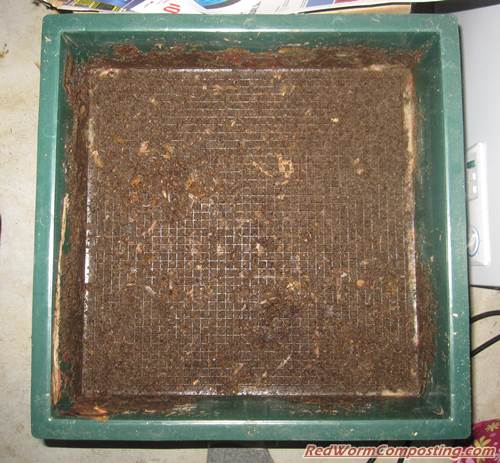 I was actually expecting to find a LOT of worms down in the reservoir (potentially lots of Euros) – but was surprised to see only a small handful of juveniles (likely a mix of both species). 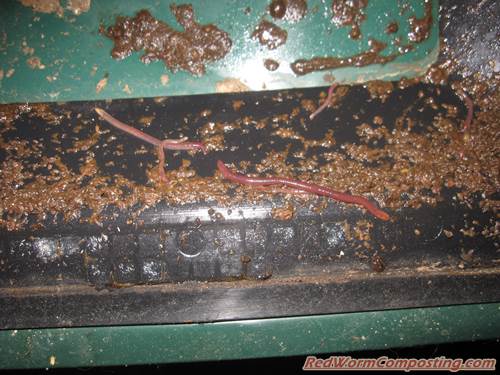 As it turns out, much of the bottom newsprint layer (sitting over grate of lowermost tray) was still intact – so I guess this helped to block worms from moving down. 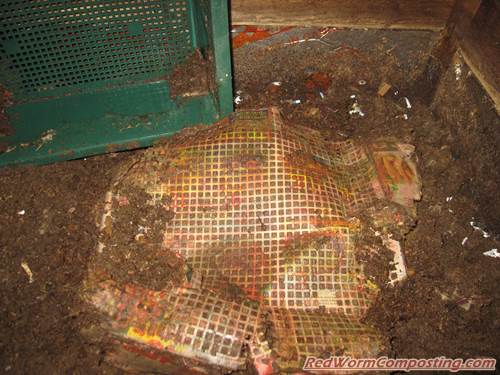 The contents of all 3 trays were dumped into my VB48 system – I’ll be posting an update on that front as well. I wish I’d had more time to assess overall worm numbers, but the impression I got was that Reds had increased in abundance (since start of experiment) while Euros had either remained approx the same or decreased.

Before I put this Euros-in-stacking-bins idea completely to bed, I think I’m going to need to set up the system again – this time using ONLY Euros (no Reds), and to make more of an effort to monitor the population size over the course of the experiment.

Until then…adios to stacking bin Euros!
🙂