Back in the spring of 2008 vermicomposting trenches completely changed the way I look at outdoor vermicomposting and gardening. I (accidentally) discovered the magic of integrated systems – directly harnessing the “power” of worms to boost plant growth.

People have associated earthworms with soil health and plant productivity for ages. It’s no secret these lowly creatures can greatly assist us in our gardening/farming efforts, when healthy populations of them are present. You don’t really need any sort of fancy “system” either – just enrich your soil with lots of organic matter, introduce some local soil worms (if you don’t already have some) and away you go!*

Integrated systems, however, are a completely different “can of worms” (literally – haha). What we’re talking about in this case is the use of composting worms in specialized systems to convert organic wastes into rich compost, containing plant-available nutrients – even growth regulators and hormones that can further boost plant growth.

*[NOTE: Unfortunately, there are still plenty of people who assume you can simply dump a bunch of worms – even composting worms – on your lawn or in your garden, and they will then magically create a fertile oasis without any assistance. Alas, this just isn’t the way it works.]

Composting worms can process rich wastes FAR more quickly and effectively than their soil cousins – and they are adapted for rapid reproduction, and life in warmer, crowded environments – so we’re able to move well beyond the typical benefits of simply having healthy populations of worms in our soil.

Since 2008 I’ve tested a variety of other integrated vermigardening approaches (aside from vermi-trenches and windrows), such as various “worm towers”, “vermi-mulch” systems, “vermiponics”, and more recently “vermicomposting planters” – all with varying levels of success. 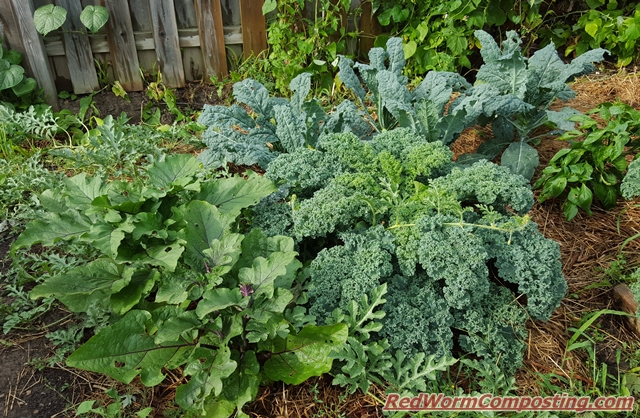 As you can likely guess by now, today I want to take the topic of vermicomposting planters a bit further – sharing my current thoughts about this method, and how it compares to my tried and true trench vermicomposting.

Firstly, let me make it clear that I still have not tested out my planter enough to come up with an ironclad final verdict. As some of you may recall, my first season (2017) got off to a very late start (didn’t really get going until July/August). And while last season (2018) did provide me with a much better opportunity to assess the potential of the system thanks to a much earlier start, I really didn’t do all that much with it.

That (neglect) in itself actually highlights one of the key differences between trenches and planters – but we’ll come back to that in a minute.

1) Aesthetically Appealing – this is a major one in my mind. Let’s face it – a nicely constructed wooden planter is much nicer to look at than a hole in the ground! lol
I could imagine a lot more (non “worm-head”) people being happy with something like this in their yard than a vermicomposting trench.

2) Good Protection for Worms – the structure of the planter has the potential to protect a population of worms even more than a typical pit or trench (assuming the worm compartment actually has a pit/trench beneath it). In my experience, the worms really seem to thrive in a system like this (but this will obiously be influenced by the design of the planter).

3) Can Boost Plant Growth – my overall impression is that plants growing in a vermi-planter have the potential to do better than those in more typical planter.

4) Flexible Design Options – Unlike a manufactured backyard composter (for example), you can basically design your vermi-planters to suit your needs and tastes, as long as you also make sure to meet the needs of the worms and plants (which can actually be bit more challenging than you might think). 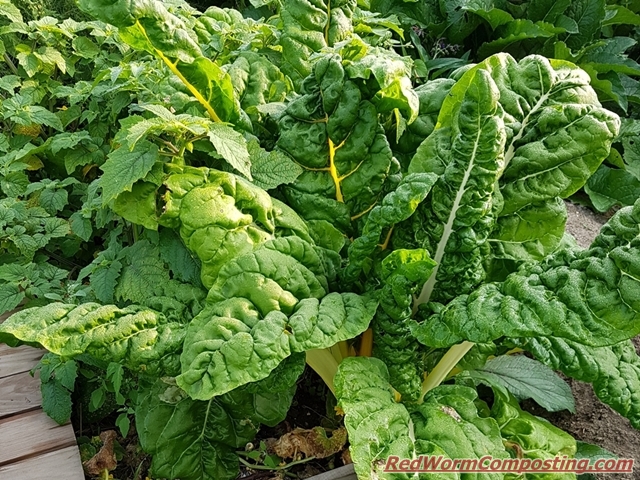 Where do I start? lol

1) Very Flexible Design – as long as you have a patch of soil to work with and some tools you are basicaly good to go. Want more of circular pit? No problem! Want a trench that follows the curves of a garden bed? No problem! Need to extend an existing trench (maybe even make an “L” shape out of it)? No problem!

2) Easily Hidden – I mentioned that a lot of people would probably prefer to look at a planter over a trench. But that’s not to say that a trench needs to be an eyesore – with the right cover (or cover bedding) your trench can be pretty inconspicuous. eg. One really cool idea I’ve come across involves running a trench down the middle of a greenhouse and putting a removable wooden boardwalk over top!

3) Awesome Worm Protection – it is tough to beat the protection that a vermicomposting trench offers a population of worms, especially with a lot of cover materials heaped over top (highly recommended). Hot, dry, cold, even wet ambient conditions can be greatly mitigated by housing your composting worms in a trench.

4) Significant Plant Growth Benefits – I won’t claim that all plants benefit from vermi-trenches to the same extent, but if there is one thing that’s become crystal clear over the years is that gardens with trenches tend to be far more productive than more typical beds. Although, it’s also worth noting that there is a spill-over effect when you start using trenches in your yard (especially high-intensity trenches receiving a lot of wastes). It wasn’t just the beds right beside my trenches that increased in fertility – it was my entire yard!

5) Cheap and “Easy” – Digging a hole in the ground won’t cost you much, unless you need to rent some machinery or hire help – and it’s pretty straight-forward for most people (i.e. easier than actually having to build something). There will certainly be an investment of time and labor, but the same can be said of a lot of activities worth doing. 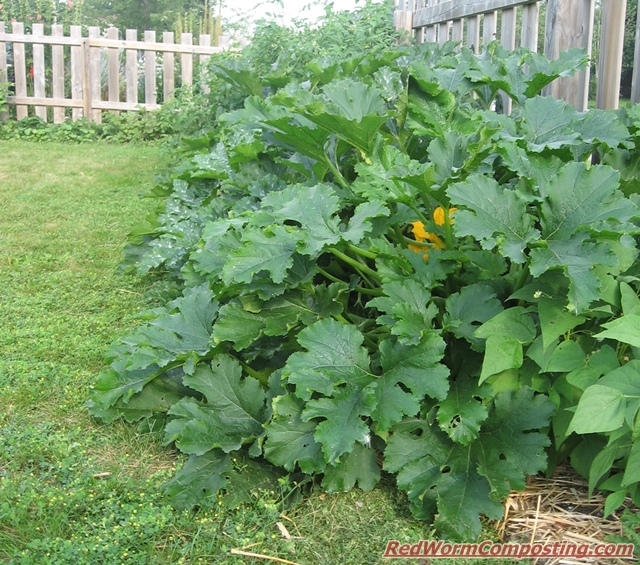 OK, let’s look at some of the potential shortcomings of these two approaches…

The big one in my mind for vermicomposting planters (and bringing us back to the topic of “neglect”) is the fact that they require a lot more attention, and just don’t (seem to) compare to vermi-trenches in terms of boosting plant growth. I’ll be honest – this was a real surprise and “disappointment” for me. I thought for sure that a planter with full soil contact below (i.e. a completely open-bottomed box), and what is basically a good sized vermicomposting pit, would be very similar to growing plants in the ground next to a trench. This just doesnt seem to be the case.

Below, you can see the difference in size between a pumpkin on grown on a plant in my vermi-planter (first image) versus one grown in a regular garden bed (not even next to an active trench!) 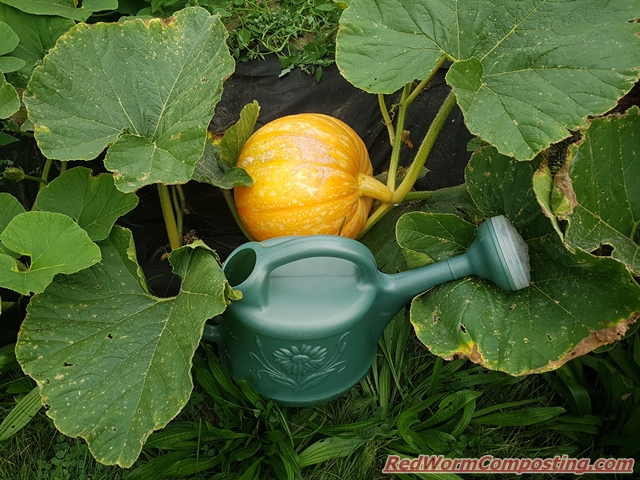 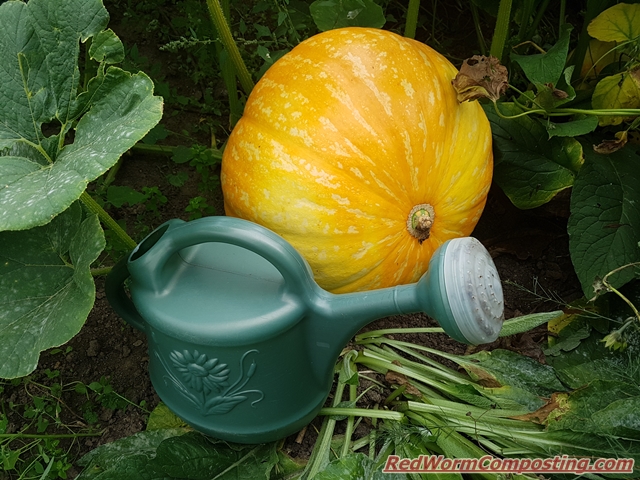 I had good results with smaller, less demanding plants like swiss chard in my planter, but with cucurbits there was just no comparison! Squash, pumpkin, and cucumber plants growing next to a vermicomposting trench are incredibly productive. Growing in my vermicomposting planter…not even close – pretty dismal growth to be honest. I just assumed they would be able to send their roots down into the soil below and basically enjoy the same benefits as a typical trench-garden plant, but I guess the conditions up in the planter box – which can certainly be less favorable than the soil below – have a major impact on the root system (and overall productivity of the plant).

As alluded to, there were extended periods of time when I really didn’t pay much attention to my planter box. During a season with plenty of rain this might not be a problem – but I’ve gotta say that dry periods affect a vermicomposting planter MUCH more than they do a vermicomposting trench (and the garden beds running along side them).

I guess the main “negatives” associated with trenches would be: 1) the fact that they may not even be an option in some cases (if you don’t have soil access, or if you have very rocky soils for example), 2) they tend to be pretty “hungry” early on, so if you don’t have a decent waste stream to feed them, you can just end up with a sunken hole in the ground (not ideal), and 3) they can require some pretty substantial up-front labor, and as such may not be all that well-suited for those who are out of shape or in poor health.

The bottom-line here is that it’s NOT so much that I’ve come to realize that vermicomposting planters aren’t worth the time, effort and expense, but rather that my appreciation of vermicomposting trenches has simply been re-inforced. I am still really excited about the possibilities with vermi-planters – and I look forward to working with mine again this season. I think these systems offer a very aesthetically-pleasing, and effective option for growing worms and smaller, less-demanding crop plants (eg. herbs, greens etc).

But at the end of the day, vermicomposting trenches still reign supreme! 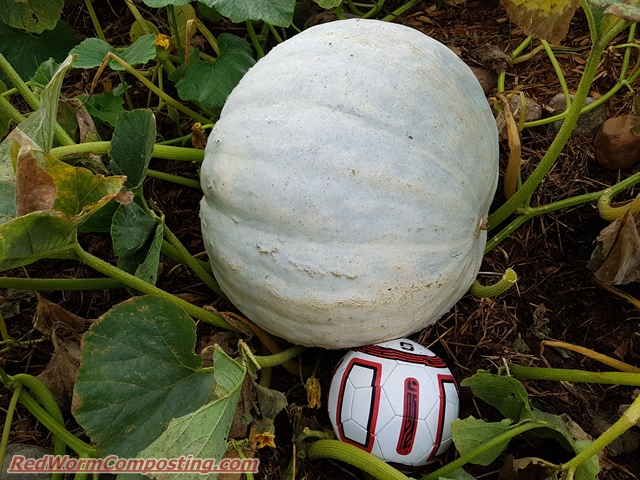 One of 3 jumbo pumpkins produced by a “volunteer” plant growing next to a vermicomposting trench during the 2018 season (as compared to a soccer ball).

As always – I would love feedback from anyone who has tested either of these vermigardening approaches (and of course all those who, just generally, have questions/comments about the topic).
😎