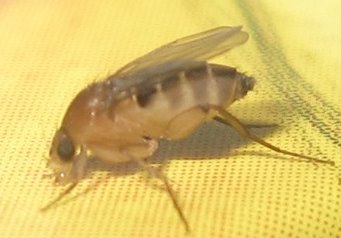 There’s no denying that various forms of flying insects can end up being a pain in the neck once established in indoor vermicomposting systems.

Fruit flies and various types of gnats are likely the most common (be sure to check out “Getting Rid of Fruit Flies and Fungus Gnats” for a solid overview of my typical recommendations for dealing with them), but the one that might very well be the worst to deal with is the scuttle fly.

Although this fly is reported to have a life cycle in the range of 10-20 days (depending on temps and other factors), you’d swear it was 10-20 hours with the way they seem to explode in number.

My first encounter with these flies happened back when I was using a VB48 system down in my basement. I’m guessing they ended up in the system when I brought in material from outside (eg leftover veggies from the garden). By the time I realized I had them it was too late! And, unlike a typical fruit fly invasion, these flies ended up everywhere! All through the system itself, but also in our kitty litter boxes (I may have been using compostable litter at the time, which certainly wouldn’t have helped), and basically all over the house.

As touched on in one or more blog posts from last fall, scuttle flies have most recently ended up established at my dad’s place (where I keep most of my systems). You probably won’t be surprised to learn that I’ve been very lax about actually doing anything about it.

I’ve even continued to actively feed my systems on a regular basis (yep – kinda like pouring gasoline on a fire)!

Based the fact that we are nearly all the way through January, I figure I should finally put in a serious effort to get rid of them! 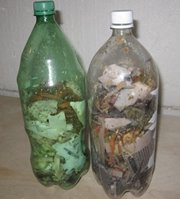 Undoubtedly the most effective strategy I employed last time (VB48 days) was the use of “Scuttle Fly Slop Traps” – basically large plastic pop bottles with foul, smelly waste materials in them and small holes to let odor out and flies in.

The process was simple once set up (and smelling nice and ripe) – 1) bottles were left to sit for a period of time (maybe a day or two) and 2) once full of “breeders” they were tossed in the freezer overnight. This was repeated over and over again. – and seemed to be a very effective way to bring about a population crash.

Scuttle flies don’t seem to be as selective as fruit flies about the smells they are attracted to. They definitely zone in on all the same ripe fruit, sour smells – but they are also attracted to a wide range of other rich, decomposing materials such as meats, dairy, animal wastes etc.

Before the holidays I did test out a variation of this method using ziplock bags (mentioned in my “The Ugly Simple Breathable Bucket Bin” post). It seems to work fairly well too – but I definitely like the rigid structure of the bottles better (and likely less chance of any leaking over time).

Last week I got my first bottle trap up and running. I added some absorbent browns (in this case literally brown paper) along with various food materials with decent potential for strong odors. Kale in particular is a something I think will work quite well (and I happen to have lots of it). Like other cabbage family plants it contains sulfur compounds that can really stink during decomposition.

I left the trap sitting out over the weekend, and was pleased to see that it had loads of flies in it when I returned this morning. Will come back to this in a minute.

I set up my second bottle this morning. Same basic idea – absorbent bedding along with various wastes with strong potential for strong/foul odors. 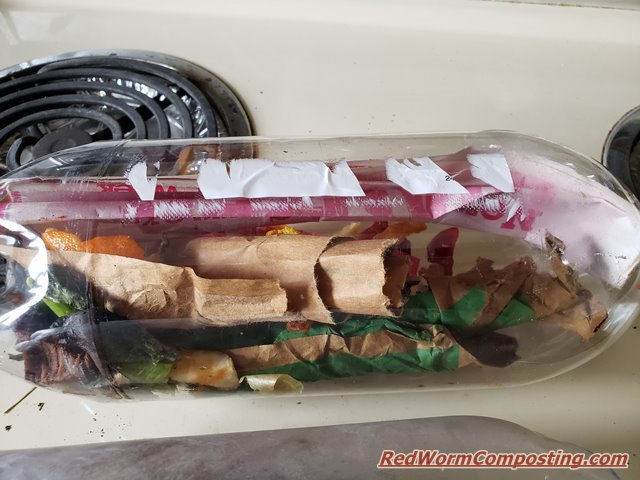 For my first bottle I added two small holes up near the cap using a screw. This time I only made one hole – don’t be fooled by the image (makes the screw look huge), it is actually quite small and in fact I ended up putting a piece of tape over half of it (and a piece of tape over one of the holes in the other bottle).

I’ve observed the flies finding the hole from the inside and coming out as well. Naturally I want to minimize this as much as possible. 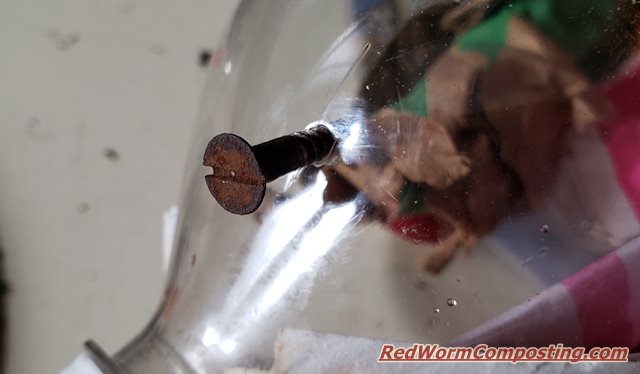 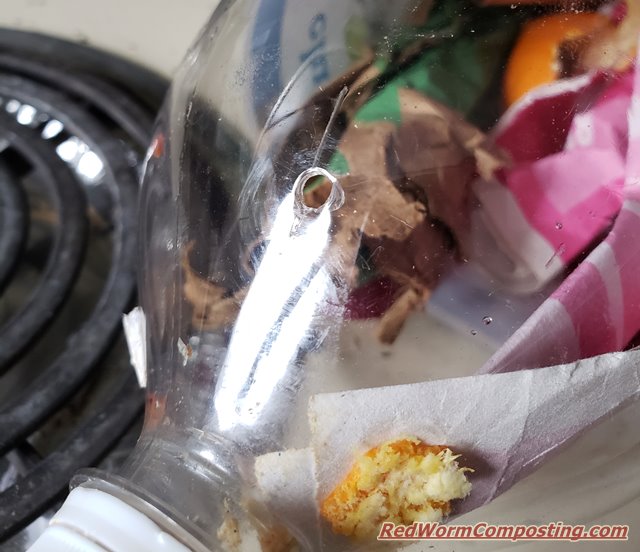 Seeing the abundance of scuttle flies in it when I arrived this morning, I decided to immediately toss it in the freezer. Generally, I would prefer to leave it to sit for an extended period (eg overnight) – but I decided to see if much shorter freeze times would still work.

I took it out of the freezer after about two and a half hours. It was clear a fair bit of freezing had happened by that point, and the flies looked like they were dead – but I’ve seen them bounce back from short freezing times with my ziplock bag traps, so I wasn’t holding my breath. 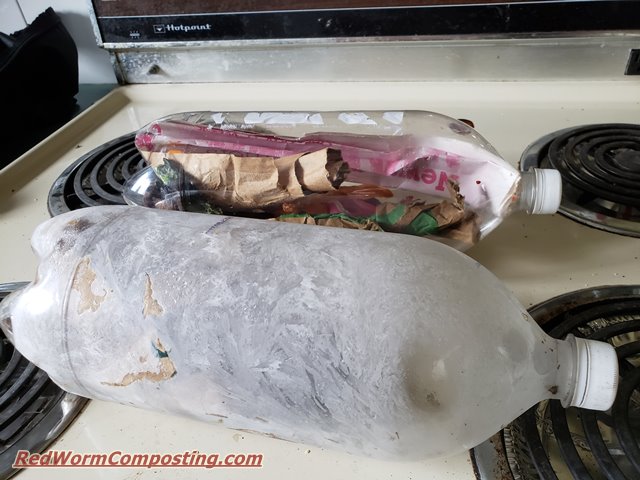 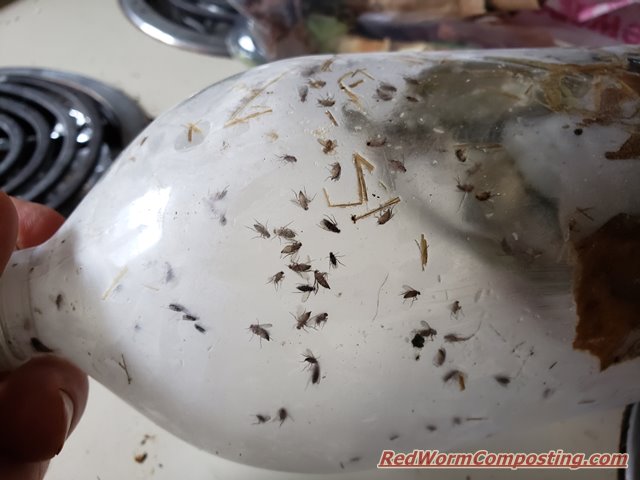 As it turns out, most – if not all – of the flies do indeed seem to be dead, so I am feeling more optimistic about shorter freezing times. I don’t think I will go any shorter than say 3 hours though.

In case you are wondering about these horrible smells being produced, I’m happy to report that I can’t smell anything. So you won’t likely end up stinking up your house using this approach.

I plan to continue setting up these traps as new bottles become available. I don’t drink pop but do use soda water fairly regularly – so I should have a reasonable ongoing supply. I will keep everyone posted on the smell – and of course, scuttle fly – front.