It seems to be “Neglected Worm Bin Day” here at Red Worm Composting (maybe I can even get a Worm Inn update posted this week – lol!).

I have indeed been neglecting my plastic “follow-along” system for quite some time, but if you’ve followed me for any length of time you’ll know that the mellow approach is typically “how I roll”. In fact, I highly recommend taking this same approach with your own vermicomposting systems. Perhaps this is a good time to remind you about one of “Bentley’s Golden Rules of Vermicomposting”:

“It is FAR easier to kill worms via overfeeding than via starvation!”

If you leave your system (especially one that holds moisture well, and contains lots of bedding) to sit for weeks on end without adding new food materials you’re not likely going to open it up and find that your worms have vanished (assuming all other worm requirements are being met). Typically, you’ll find healthy worms, no food in sight, and a lot less bedding!
8)

I should quickly point out, though, that if you are using a wooden bin (or just generally, one with really good ventilation) and/or your system is outdoors there are some other things that can “go wrong” when the system is completely left alone – but my “assuming all other worm requirements are being met” disclaimer (lol) was meant to address this. Obviously if, for example, a system is allowed to dry out or overheat (among other things) those worm requirements get tossed right out the window!

When I checked on the system the other day it looked like (surprise, surprise) the level of material had dropped substantially. As you can see in the image below, there is still a fair amount of bedding up on top, but if you compare it to the image included at the end of my last post (directly below it) it becomes clear that a fair amount of the bedding has been processed. 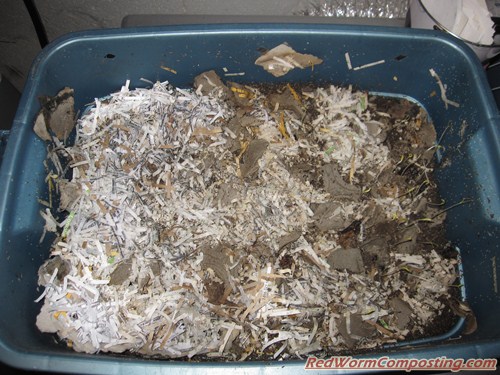 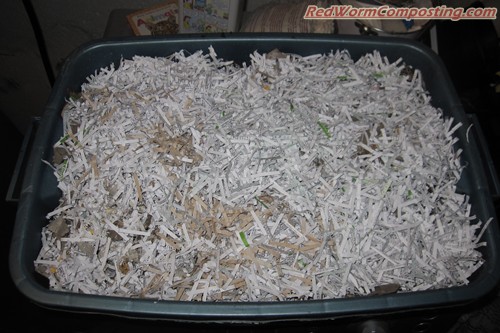 I figured I might as well feed the worms while I was at it – so I decided to dump in a bag of peas (Mr. Genius here took them out of the chest freezer – with the intention of moving them up to our smaller freezer – then forgot about them! lol). According to the package it was 750 g (1.65 lb) worth. 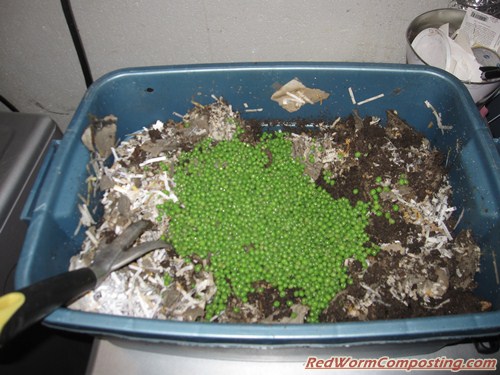 I was in a bit of a rush, so I didn’t really get the chance to add a lot of additional bedding at the same time. 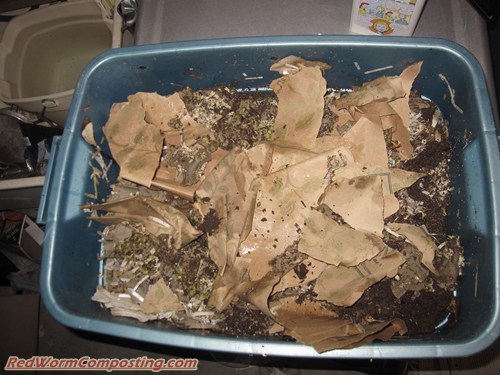 Generally speaking, I wouldn’t recommend feeding like this – especially not with nitrogen-rich materials like legumes (peas, beans etc). Since I’ve been doing this for years, and since this particular bin has great ventilation, I certainly wasn’t worried – BUT, this is the sort of approach that can in fact lead to serious problems if you’re not careful.

When I checked on the bin today, the peas smelled pretty foul, and while the worms did seem to be feeding around the outer edges of the pea-zone (ahem), they didn’t seem to be venturing into the material at all. 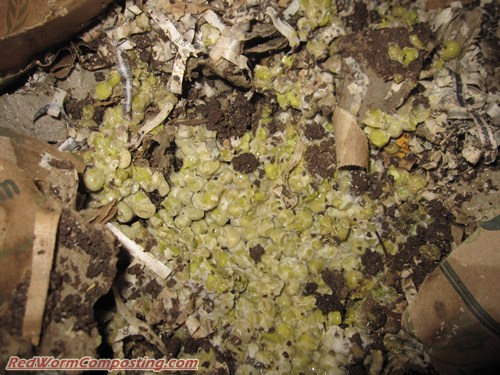 I decided to break up the mass of rotten peas and spread them around the bin a lot more – this should definitely help to make them more worm-friendly.

Given how long this experiment has been going (a little over 3 months I believe), I’ll likely start thinking about harvesting fairly soon. Before doing so, I plan on feeding a bit more regularly so as to end up with a better quality end product (more nutrients in food wastes than shredded cardboard and paper). This should also result in more of the bedding breaking down as well.

I’ll be sure to keep everyone posted!
8)